The official launch of Fringe World Festival on Thursday night was interrupted by local artists protesting the festival’s partnership with Woodside Petroleum. 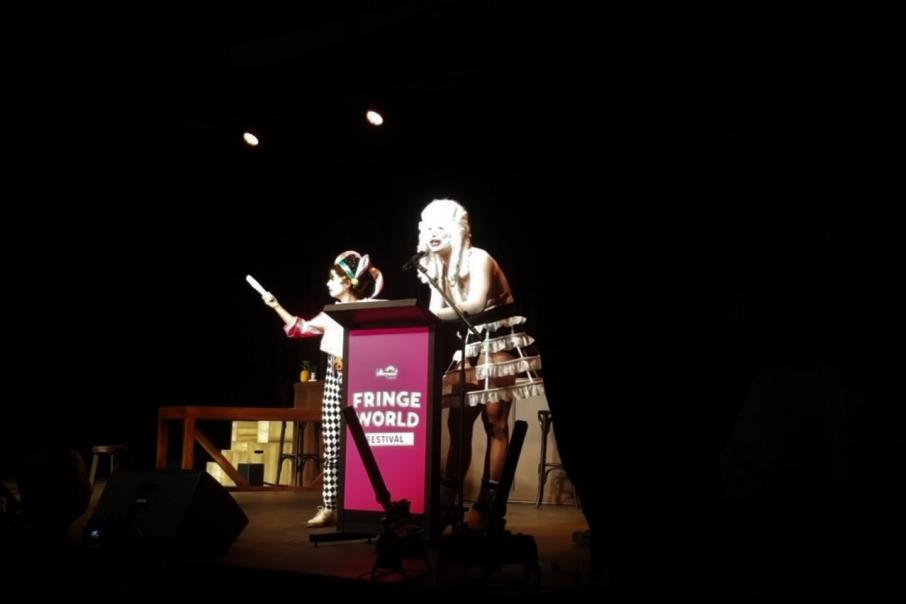 Protesters on stage at the launch.

The official launch of Fringe World Festival on Thursday night was interrupted by local artists protesting the festival’s partnership with Woodside Petroleum.

As festival director Amber Hasler made her way to speak on the stage, performers Ash Traylia, Petros Vouris and Noemie Huttner-Koros, dressed in attire from the Dark Ages, joined Ms Hasler on stage and asked her for the microphone.

Reading from a scroll, Ash Traylia said the group opposed the ‘oily’ partnership between Fringe World and Woodside.

“And our art, my citizens, is being hath tarnished and exploited as a multi-purpose billboard for this corporation.

“This partnership needs to end and this audience right here has the power to end it.”

There were mixed reactions to the interruption, with some audience members cheering and others booing.

Fringe World launch MC Gingzilla tried to ask the protesters to leave and said while she believed in free speech, this was not the time or place.

Once the performance was over, the trio returned to their seats and left the theatre after Ms Hasler had finished on stage.

Woodside is considering developing two LNG projects in Western Australia worth about $35 billion, Scarborough and Browse, with decisions expected by 2021.

A statement from the protesters said the partnership between Woodside and Fringe World was set to end in 2021 and artists and performers were asking the festival not to renew it.

A Fringe World spokesperson said the festival respected the individual’s right to protest.

“We hope that rather than focussing on the protest, that people celebrate the opportunity of Fringe World and see the shows that our amazing artists are presenting,” they said.

“There is an incredible array of more than 700 events at more than 140 venues all over Perth and in regional WA.”

Woodside is the festival’s principal partner and has supported the festival since 2012, the first season after the pilot in 2011.

Although it is unclear how much Woodside contributes to Fringe, festival organiser Artrage received $5.9 million from sponsors in 2019.

Woodside gave $2 million to arts organisations in WA in 2019 including Barking Gecko Theatre Company and the West Australian Ballet.

When asked to comment on the incident, a Woodside spokesperson said Fringe brought energy and vibrancy to Perth.

“Woodside is proud of our long-standing association with such a fabulous summer event, which includes the Homegrown Heroes program, shining a light on WA talent, and the Ngurra Nyingu art exhibition, showcasing artists of the West Pilbara,” they said.

In 2019, National Galleries of Scotland, the National Theatre in the UK and the Royal Shakespeare Company ended partnerships with oil companies Shell and BP.

Tate and Edinburgh International Festival ended their sponsorship deals with BP in 2016.

Fringe World 2020 starts today and will finish on February 16.