Clarke’s on a right royal roll

The decision to open a BYO restaurant has paid off for Clarke’s of North Beach. Adam Orlando reports. 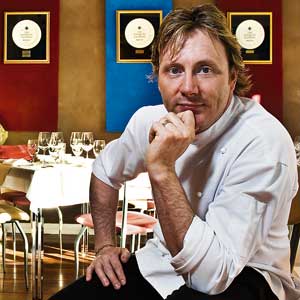 ESTEEMED COMPANY: Stephen Clarke’s restaurant has been named best BYO establishment in the country – quite a feat for the North Beach favourite. Photo: Grant Currall

A PAIR of authentic documents signed by the Earl and Countess of Leicester is mounted on the wall in the entrance of Clarke's of North Beach.

Both commend owner and head chef, Stephen Clarke, for his exceptional culinary skills, having been their personal chef and at times cooking for the royal family in England.

Starting his career in the UK as a dishwasher in 1985, Mr Clarke has worked in just about every type of restaurant - from Caversham House in the Swan Valley to Michelin-awarded venues in the UK.

His fine-dining establishment on Flora Terrace has been named the best BYO restaurant in the nation and last month was awarded best-unlicensed venue at the Lion Nathan and Restaurant and Catering Industry Association WA awards.

However, Mr Clarke says his story begins in the early 2000s, when he and wife, Kim, took their children back to England so they could get to know their extended family.

"I remember the first job I applied for when I got back; I was very lucky, I don't even know how I landed it, I ended up being the personal chef to the Earl and Countess of Leicester, which is Britain's most prestigious shooting venue," Mr Clarke told Gusto.

"I was terrified, I thought 'oh no, the Queen is coming'.

"The year I was there we often had the royal family over, it was amazing and I really, really enjoyed that job.

"I really enjoyed the rawness of the job and taking a product you can see just from being a piece of meat and seeing it actually as an animal, and you're there plucking it, and I think when you do that you end up respecting that particular product much more than what you would if you simply picked that up in a butcher's shop.

"The fact that the Earl of Leicester would go and shoot a bird and bring it over and I would pluck it, it was amazing."

Soon after, the Clarkes returned to Western Australia, and in 2003 opened Clarke's of North Beach, replacing a struggling Italian cafe situated in the popular suburban dining precinct near other RCIA award-winning venues such as Soda Café.

"The opportunity came up for this place; it was a little run-down Italian cafe that wasn't doing well but something was here screaming out to me that this was really worth doing ... it's a hub surrounded by so many wonderful suburbs," Mr Clarke says.

"We've certainly done very well out if it by being [named] the best BYO in the country, which was an amazing achievement for this little tiny family suburban restaurant.

"The idea of being BYO in this economical climate is that the people around here, they know good wines, they have their own cellars and they know the price they should be paying because many of them have shares in a winery.

"And so in this financial climate it is perfect for people who know wines to bring their own wine in, and the standard of the service has to warrant the quality of that wine, which is why we spend an awful lot of money on quality crystal, glasses, and beautiful decanters.

"And that's where we have come in as a BYO [restaurant]. We offer a fine-dining service, we offer marron, truffles, venison, and all these things that are expensive, but they're affordable because you can bring your own bottle of wine to enjoy them."

With a weekend waiting list of two weeks to reserve a seat at Clarke's of North Beach, Mr Clarke's strategy to remain unlicensed appears to have paid dividends.

"In restaurants, a lot of the margins are made up in liquor, so we are on the back foot with whatever we do it comes out of the food, but because we have such low overheads we've been able to survive," he says.

"We've enjoyed being BYO and we've enjoyed what we've achieved and I think we have taken an opportunity in the marketplace and turned it upside down."