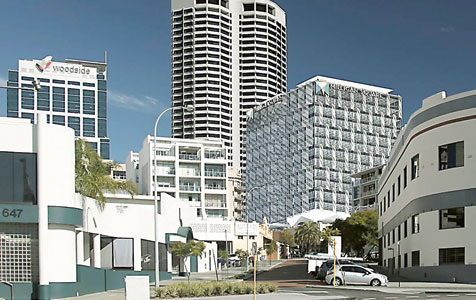 CHOICES: The 21,000sqm Milligan Square development is considered among the possibilities for Ernst & Young, which is evaluating its options for relocation.

Global accounting giant Ernst & Young is running the numbers on a new CBD address amid the growing likelihood it will quit its Mounts Bay Road address in favour of a new office tower.

The second tower at Brookfield Place has also been touted as a potential candidate, but leasing executives suggest Ernst & Young is unlikely to set up shop in the same building as rival firm Deloitte, which signed up to three floors of the yet-to-be-build skyscraper in June.

Deloitte and Corrs Chambers Westgarth have signed up to leases that cover 34,000 square metres in the low-rise portion of the second Brookfield tower, but the tower’s high-rise sections are still in play.

Industry analysts suggest big-name financial services businesses are the most likely targets for this premium space.

Ernst & Young Perth managing partner Michael Anghie confirmed the firm had gone out to the market with a request for proposals for up to 10,000sqm of office space, but it was too early to discuss any other details.

Ernst & Young’s current address is above the Mounts Bay Road bus port, and leasing analysts suggest it’s more likely the accounting operation will opt for one of the emerging or CBD fringe office locations if it decides to move.

Leighton’s Kings Square has already surprised market watchers by luring oil and gas behemoth Shell from St Georges Terrace, as well as Leighton subsidiary John Holland and HBF, which has negotiated to buy the fourth tower in the precinct.

Despite these high-profile signings and the purchase by national property group DEXUS Property Group of the first three towers at Kings Square, the precinct still has significant vacancy, spurring speculation it could provide a suitable new address for Ernst & Young.

At the west end of town, Georgiou’s Milligan Square proposal is the other project that has been drawn into the speculation around Ernst & Young’s accommodation review.

It’s understood the 21,000sqm office project has made it to the accountant’s shortlist but Georgiou Capital’s director of property development and investment, Jon Smeulders, was not prepared to make any comment other than to say that it was in serious talks with two tenants.

“While we have a number of continuing inquiries, there’s not the sort of inquiry you would have seen 12 months ago,” Mr Smeulders said.

“There’s a lot of pre-election sitting on hands but we are in advanced negotiations with two tenants, both with the scale to trigger the project.”

Georgiou needs leasing contracts accounting for at least 50 per cent of the office component of the project to push the button on Milligan Square and move ahead with its plans for an adjoining 13-storey hotel.

Ernst & Young will be hotly pursued in the current leasing market, not least by its current landlord Brookfield, which will work hard to avoid a large vacancy in its Mounts Bay property.

Despite a historically strong pre-commitment market only a handful of new leasing deals have been done in existing buildings this calendar year.

The appeal of a new development is clear when comparing net rental costs, which are running at about $700/sqm for a new project compared to about $900/sqm for one of the city’s premium properties.

Ernst & Young’s lease at its Mounts Bay Road headquarter runs until 2016 and there’s no guarantee this review process will lead to a move, particularly if Brookfield can find a way to sweeten the deal.