City Beach next for IGA operator 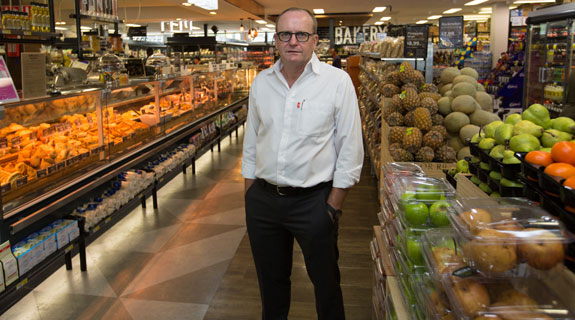 James Kelly at his Taylor Road IGA in Nedlands.

Innovative IGA owner James Kelly will open his third 24-hour supermarket in July, signing up to be the anchor tenant at a redeveloped Boulevard Shopping Centre City Beach.

Boulevard Shopping Centre owner GPA is in the middle of a $10 million revamp at the historic centre, which in 1962 was used as the mess hall for athletes competing in that year’s Empire Games.

The centre was damaged extensively by fire in 2014, destroying three shops and causing an estimated $3 million worth of damage.

Redevelopment works are under way and are expected to be complete by late July, allowing Mr Kelly to open his third IGA supermarket.

Mr Kelly owns the Taylor Road IGA in Nedlands as well as the 2nd Avenue IGA in Mount Lawley, with both of those stores having a distinct difference from a usual supermarket – a strong focus on locally-grown fresh fruit and vegetables, chef-made ready-cooked meals, as well as full-line bakeries and butchers.

At City Beach, Mr Kelly said his new IGA would have its own distinct identity, while also maintaining the standards of quality on offer at the other two stores.

Interior design firm Design Theory, which counts Asado in Claremont and BamBamBoo in the city in its extensive portfolio of venues it has designed, will be responsible for the City Beach fit-out.

Mr Kelly said a feature of the City Beach store, which will be open 24 hours a day, would be a fruiterer at its entrance, a concept not being used in Nedlands or Mount Lawley, while also offering products from a 300-strong list of local suppliers.

“We’re concentrating on the fresh, the meals to go, the deli and the fruit and veg,” he said.

“Customers can also expect to find our signature muffins and duffins that we sell in both stores.”

GPA spokesperson Peter Atzemis said the shopping centre owner was extremely pleased to have signed an operator like Mr Kelly to underpin the redevelopment of the mall.

“When we first got introduced to James’ shops, we were pretty impressed with them/ We worked pretty hard to secure him and he’s pretty excited for the opportunity as well,” he said.

“Previously we’ve had almost deli-size IGAs there, which aren’t easy to keep fresh and have a great variety of products, so the range we can offer now is going to be great for the community.”

Mr Atzemis said a big focus on the redevelopment had been the shopping centre’s heritage.

“We’re trying to reference through public art and other bits and pieces, the athletic side of things and trying to get some old photos and some plaques in the aggregate where we can have statements about achievements during that period,” he said.

“We’re very much focused on trying to reference that heritage, it’s a big drive of ours.”

Mr Atzemis said the redevelopment of the Boulevard Shopping Centre would result in a similar upgrade in amenity as GPA’s Waterford Plaza WA revamp, which was completed in 2010.

Most of the previous tenants of the Boulevard Shopping Centre have been retained, however with a 1,000 square metre IGA store, the centre will be repositioned.

“We’ve got the old favourites, the food guys who are back, and we’ve got a new restaurant coming in, and a potential hairdresser, that takes us to pretty much full occupancy,” Mr Atzemis said.

“The expansion of the IGA means there was no room for internal shops so it’s very much al fresco-style now.”