Perth’s booming high-end chocolate market has lured WA and eastern states-based players hoping for a piece of the action, which is traditionally topped up at Easter. 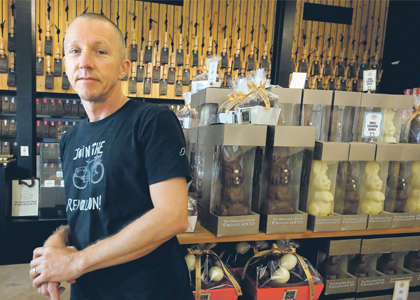 Perth’s booming high-end chocolate market has lured WA and eastern states-based players hoping for a piece of the action, which is traditionally topped up at Easter.

CHOCOLATE is always popular but Easter brings a particularly high level of action to the shops and cafes of Perth’s chocolatiers.

The Margaret River Chocolate Company is enjoying its second Easter in the CBD as customers eye just a portion of the 15 tonnes of chocolate the company sells annually over the period.

The company has led the charge into Perth’s high-end chocolate market in the past few years, which has been transformed as players from across Australia jostle for a sweet spot offered by a booming economy and rapid population growth.

The Margaret River Chocolate Company founder Martin Black has been eyeing the action from the wings of his city store that, with its expansive interior and sharp lines, is trading strongly in a city market that has grown from almost nothing.

It is a far cry from the South West company he and several partners founded in 1999.

The first factory in Margaret River began life as a holiday shack owned by Mr Black and associates.

At the time, the town was maturing as a tourism destination of note and Mr Black felt the time was right to “put the land to use and create something unique in the region”.

What emerged was Margaret River’s first chocolate factory, booming tourism growth and a brand reputation that followed the fortunes of its namesake.

“We came in at the right time and grew with Margaret River really, I think the brand association was important for us but we also built a loyal customer base early on which gave us uniqueness and consumers an emotional attachment,” Mr Black says.

In 2005 the company expanded into the Swan Valley, which, like Margaret River before it, was growing as a tourism destination. In 2012 the company made a long-considered move into the CBD after a retail vacancy came on to the market at a site on the corner of Murray Street and Wolf Lane.

“We’d been planning it for about five years and I think that, with the growing number of workers and shoppers in Perth, as well as tourists on business and short city breaks, it was important for us to be here,” he says.

Melbourne-based chocolate cafe San Churro has led the eastern states push into Perth. Its expansion has been rapid, with the chain recently opening a store in Northbridge’s James Street.

San Churro also has stores in Subiaco and Leederville, Hillarys Boat Harbour and Fremantle, and at shopping centres in Rockingham and Mandurah.

Melbourne’s Theobroma, which offers chocolate cafe dining, has three chocolate ‘lounges’ in Fremantle, Brookfield Place in the CBD and at Waterford Plaza to add to its sites in the eastern states, UK and New Zealand.

The high-end Koko Black has also moved into the Perth market, adding a Claremont store to its list of Victorian cafes.

The company offers a similar dine-in experience to San Churro, combined with a chocolate production quality to rival that of The Margaret River Chocolate Company.

However, Mr Black, who has watched the competition move into Perth in recent years, sees positives as well as challenges brought by the entry of new players.

“I think competition is healthy and the growth in Perth is a positive sign of how the market is, demand for high-quality chocolate is increasing and that can only be a good thing,” Mr Black says.

“Obviously, they (new entrants) are direct competitors but at the end of the day if you’re good enough you’ll survive and prosper and I think we’re in a great position to continue growing and building on our uniquely West Australian brand.”

For now, the focus is on getting over the Easter rush. Like its competitors, the company is offering a huge variety of Easter treats, including chocolate bunnies, dark-chocolate bilbies, giant freckle and honeycomb eggs and a range of hot cross bun-style truffles.

Despite substantial changes to the Perth chocolate market, one thing remains a certainty, customers love and demand a sweet treat at Easter.