China’s expansionist intentions in the South China Sea are becoming more apparent, much to the concern of Asean nations and their allies. 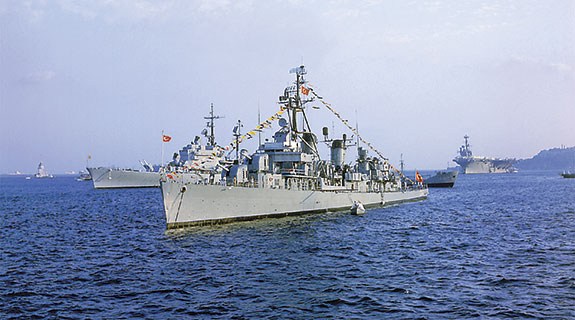 China’s expansionist intentions in the South China Sea are becoming more apparent, much to the concern of Asean nations and their allies.

Most secondary students no doubt have a fairly good idea what the Great Wall of China is, but ask them what China’s ‘great wall of sand’ is and you’re unlikely to receive an answer.

The former was a fortified and generally manned wall built along an east-to-west line to the north of historical China to thwart invasions by warlike neighbours.

The ‘great wall of sand’, however, is a network of artificial islands now being constructed across the contested South China Sea, whose waters lap the shores of Vietnam, Philippines, Indonesia, Malaysia, Brunei and southern China.

Although this huge expanse of water was for centuries viewed as international space where freedom of the sea prevailed, Beijing is moving towards declaring full sovereignty over it by, at minimum, regulating air and sea entry.

Things are that grim.

Self-declared perpetual ownership is being backed-up by China’s cherry-picking of a chain of atolls and barely submerged reefs, which are being upgraded into naval and air bases, so anyone contesting China’s claims to ownership will need to militarily back their contentions.

And this doesn’t only apply to the contested sea’s literal states but also regular users from further away, including Australia, Japan, South Korea, India and the US, to name five.

Canberra, like Asean state capitals, has been guarded in querying China’s comprehensive moves to fortify several of the South China Sea’s island and reef outcrops, most provocatively in the disputed Spratly Islands.

No-one is seeking confrontation by advocating forcefully for the past practice of universal uncontested access to these waters.

Time will tell if this appeasing mindset prevails.

If not, then what sort of response can we expect from those that find China’s unilateral sea-grab unacceptable?

How can Beijing’s unilaterally imposed possession be countered, or reversed?

But things may be moving towards challenge and change.

On March 31, US Navy Admiral Harry Harris, who is about to assume control of America’s Pacific Command, spoke out.

Addressing an Australian Strategic Policy Institute dinner at the Australian War Memorial Admiral Harris said China’s takeover and fortification of a string of manmade islands posed a grave threat to the stability in the Asean region.

China’s island network, he said, stretched across some of the world’s busiest sea lanes, which, among other things, carries about 60 per cent of Australia’s trade.

One of the new artificial island bases, named Fiery Cross Reef, is more than 1,000 kilometres from the Chinese coast, but now has a combined naval/air base that can accommodate China’s largest naval vessels.

It also has a 3,300-metre airstrip, which most combat and support aircraft in China’s army, navy and air force could utilise.

“China is creating a ‘great wall of sand’ with dredges and bulldozers over the course of months,” Admiral Harris said.

“When one looks at China’s pattern of provocative actions towards smaller claimant states, the lack of clarity on its sweeping … claim that is inconsistent with international law, and the deep asymmetry between China’s capabilities and those of its smaller neighbours – well, it’s no surprise that the scope and pace of building man-made islands raises serious questions about Chinese intentions.”

China has also built airfields and naval facilities on Woody Island in the Paracel Islands group in the sea’s north-west, in addition to those in the south-eastern Spratlys, plus others.

Interestingly, Beijing’s redesigned passports carry a map on its cover page showing the South China Sea as an integral part of China.

But Beijing rejects their concerns, insisting that the construction is necessary and is being undertaken on Chinese territory.

Interestingly, early last month Prime Minister Tony Abbott signed a security cooperation agreement with Vietnam to support freedom of navigation by air and by sea in the South China Sea.

“We both deplore any unilateral change to the status quo,” Mr Abbott said, without naming China.

Admiral Harris urged caution because the potential for “miscalculation”.

So far China’s ‘great wall of sand’ policy has only prompted Washington to stress the need for a cooperation conference between Asean states and Beijing.

As long ago as 2002, Washington began urging claimants to embrace the Asean-China Declaration on the Conduct of Parties, which committed them to exercise: “Self-restraint in the conduct of activities that would complicate or escalate disputes and affect peace and stability.”

“How China proceeds will be a key indicator of whether the region is heading towards confrontation or cooperation,” Admiral Harris said.

‘‘The evidence I’ve been chewing on over the past 15 years is overwhelming,” he said.

“China’s military rise, if left unchecked, will necessarily disrupt the peace and stability of our friends, partners and allies.”