Chica carves it up in cut-throat world 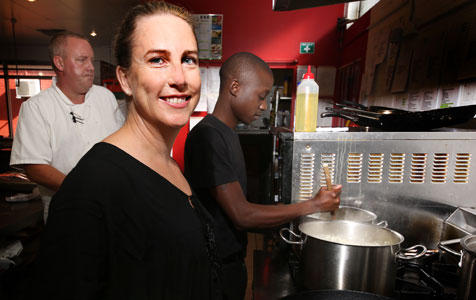 Lee Hall has had to overcome numerous challenges – both big and small – in the 9 years building her business.

The founder of Perth catering company Chica Catering, Lee Hall, has faced her fair share of obstacles in building her business – from a fire that ruined all the food prepared for three separate functions, being asked to cook without an oven, to remaining professional amid naked entertainers.

And while always having to be the sober person at the party is not a barrel of laughs, it’s all part of the job.

“At the end of the day the people are there and they want to be fed, so you’ve just got to make it happen,” Ms Hall told Gusto.

A trained chef, Ms Hall founded Chica Catering in 2004 after becoming fed up with working in restaurant kitchens run by temperamental head chefs.

It started as a private gig for a friend (whose father was electrical appliance retailer Rick Hart).

“We started to do a few things for his work at the time and then a few private gigs as well,” Ms Hall says.

“This was all from home so it all started to get a bit overwhelming.”

Over the next few years the business garnered a regular following and, after securing a lease on a shop to use for food preparation in Innaloo, it began to take advantage of the market for corporate catering.

Corporate events now make up about 75 per cent of Chica’s annual revenue, with the remaining 25 per cent coming from private functions such as birthdays and other celebrations on the weekends.

Revenue is growing by about 30 per cent year on year, and Ms Hall expects this to nudge above the $2 million mark this financial year.

She says the catering industry is cut-throat with fierce competition.

“If you make one mistake, whether it’s a corporate or private event, if you ruin (the client’s) day, you’re gone,” Ms Hall says.

“It could be something really, really minor, but at the end of the day it’s their perspective and there’s always another caterer to choose from.”

She says the ability to make all the food personally on Chica’s premises, catering for specific dietary requirements, and always being punctual are the strengths the business uses to set itself apart from rivals.

As with most in hospitality, recruiting reliable staff has been a significant challenge, but Ms Hall says understanding what staff want is the key to successful retention.

“If they want hours then you’ve just got to throw a whole lot of hours at them,” she says.

The next challenge for the business is obtaining a liquor licence.

“It would be a big boost for the company and it would also mean that we can offer everything to our clients; sometimes it’s a deal-breaker (no licence); they want to deal with everything through one company, and we can’t do that so it’s just frustrating,” Ms Hall says.

The lack of a licence is not through lack of trying, however, with Ms Hall knocked back by council a couple of times already.

“I'll keep trying, I just need to find another way around it,” she says.

In terms of growth strategies, Ms Hall intends to further bolster corporate bookings, while keeping the private segment as a “nice balance”.