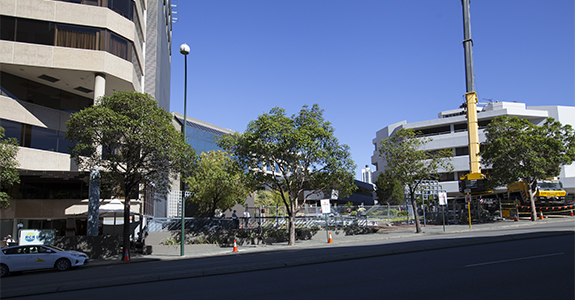 Channel Nine will create a public plaza and media precinct at the top end of the Terrace. Photo: Attila Csaszar

Channel Nine is shifting its Perth headquarters into the CBD, with construction on a state-of-the art studio to commence in coming months at the top end of St Georges Terrace.

Channel Nine will build a showcase studio and a large video screen, to transform the small park that links the buildings into Nine Plaza, creating an interactive media campus.

The facility, designed by Cox Howlett & Bailey Woodland, is scheduled to be operational by late 2016, with construction to begin in December this year, subject to relevant approvals.

The deal was brokered by Sheffield Property on behalf of landlord Primewest, as well as Colliers International on behalf of Channel Nine.

Sheffield Property director Mark Clapham told Business News that the studio would be accessible to the public.

“Out of all of the studios I’ve seen around Australia for all the television stations it really is going to be one of the most unique, and one with probably the highest profile,” Mr Clapham said.

“The park really sets it off because it’s going to allow people in Perth to come and watch televised events which Channel Nine will be broadcasting, whether that will be sports or news-related.”

Primewest director John Bond said negotiations stretched about nine months on the deal, following Nine putting out an expressions of interest campaign for its office and studio accommodation around 18 months ago.

A previous plan to construct a multi-storey office building at the site has been shelved in favour if the Nine studio proposal.

“We had a lot of input from our architects and a lot of consultants to make sure we could meet a lot of their criteria.

“We were able to give them something unique which they weren’t able to get anywhere else because we had that open space, and again, our architects had a lot of vision in putting that forward, which I think really grabbed their imagination.

“It’s a pretty unique location which happens to suit their needs very well, I can’t actually think of another location that could have worked as well for them.”

Channel Nine Perth managing director David Mott said the location on St Georges Terrace gave the station an opportunity to create a space which it could call its own, and also enhance its connection to the public as well as the business community.

“Rather than just having an office tower or an office block that limited you in the sorts of things you could do, we felt there was an opportunity in the Perth market to create a destination that was more than just a building with a logo on it,” Mr Mott told Business News.

“That’s something we were very keen to pursue, and it’s almost a first in Australia I would argue, creating this sort of environment that we can broadcast out of and we can utilise that space across many different parts of our business.

“Part of it was the screen as well, it was important for us to create something quite unique, a television city aspect I suppose, having the big screen there.” An artist's impression of the new studio and Nine Plaza.

Mr Mott said the studio concept was also the result of extensive collaboration with planning staff at the City of Perth, as well as Lord Mayor Lisa Scaffidi.

"There has nothing but support from their point of view," he said.

"We’ve had no issues from a planning point of view, and the fact that they didn’t see any issues around it really helped our thinking in saying ‘this is the site for us'."

The land on which Channel Nine’s studio is currently situated on in Dianella is owned by WIN Corporation, after it was not included in a $223 million sale of the Perth station to Nine Entertainment Company in 2013.

It is understood WIN is seeking to redevelop the land into a residential estate.

Channel Nine will be the second TV station to exit its traditional Dianella home, with Channel 7 already having shifted its Perth studio to Osborne Park, sharing space with The West Australian newspaper.

Channel Ten is also formulating a move away from Dianella, after it sold its plot in August last year in a deal worth $11.9 million.

The station’s lease expires in late 2016, while early plans for its land comprise an apartment building with around 76-dwellings, as well as around 96 housing lots.

Channel 7 is also understood to be formulating a residential carve-up of its Dianella land, but has not advanced any plans to date.