Business must scale down the investment cliff, not jump and hope for the best. 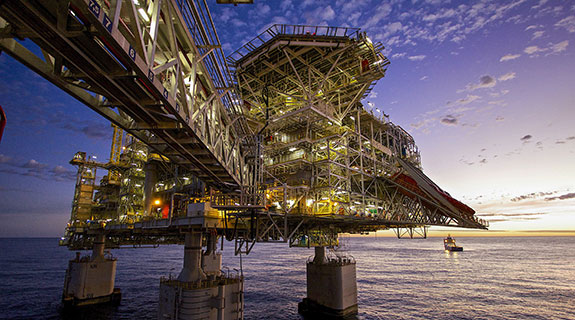 DRAIN: Up to $20 billion less in investment will flow through the WA economy once Chevron’s Wheatstone project (pictured), Roy Hill and others are completed. Photo: Chevron

Business must scale down the investment cliff, not jump and hope for the best.

The Western Australian economy is feeling the pain associated with the cyclical downturn in the resources sector.

More than 26,000 jobs have been shed across the resources sector since the employment high point in 2012, as the construction phase is completed on many projects. However, job losses also form part of an ongoing strategy by miners to drive down operating costs in the face of sharp falls in commodity prices.

Analysing the latest national accounts data from the Australian Bureau of Statistics suggests that the WA economy has been feeling this pain for some time. The state’s economy has recorded negative growth for 10 consecutive quarters, and has now shrunk to the size it was back in 2011.

Labour market conditions, while holding up, strongly suggest a slowing economy. The unemployment rate is now at a 13-year high at 6.4 per cent, with almost 100,000 people unemployed – almost double the most recent low recorded in 2012.

And while there are jobs still being created, they are mainly in part-time roles, as businesses adjust to the weaker market conditions.

These challenges will continue to confront the WA economy over the next few years as it completes its growth pivot from investment to production, with a more significant ‘investment cliff’ approaching in 2017.

The scale of that challenge is daunting, with (conservatively) at least $20 billion less investment activity flowing through the economy by 2017 once the mega projects of Gorgon, Wheatstone, Inpex and Roy Hill are completed. To put this in perspective, this represents 25 per cent of investment activity and almost 10 per cent of total activity in the domestic economy last year.

Fortunately, the ramp-up in exports following the completion of these projects will keep the WA economy growing; the challenge will be that this new phase of export-led growth will be far less labour intensive than previously.

Job creation will need to come through increased activity in other sectors of the economy. There is no lack of opportunities in WA, but the confidence needed for our business leaders and entrepreneurs to make those decisions to invest in new plant and equipment, in research and development, in exploration, or in people, just isn’t there at the moment.

Perhaps it is fortuitous, then, that 2017 will also be an election year in WA, providing the opportunity for both the government of Colin Barnett and the Mark McGowan-led opposition to provide a long-term strategic vision for the state.

It might seem like a long way out to be talking about the state election, but the challenges ahead necessitate it.

Given the current financial position of the WA government, the ability of each party to outbid each on spending programs and infrastructure promises will be limited. However, progressing a bold economic reform agenda does not have the same financial constraints.

The bold economic reforms undertaken through the 1980s and 1990s were responsible for building the resilient economy we have today, and were the launching pad for Australia’s much-admired 24 years of consecutive economic growth.

However, such prosperity has also brought with it reform complacency, which leaves us poorly prepared to confront the economic challenges ahead, or the opportunities that we need to capture.

While national reform leadership is required, there is still much that can be achieved at a state level.

Electricity reform, privatisation of public assets and entities, contracting out of government services, reforms to broaden the land tax base to allow for the abolition of taxes on property and business transactions, the final push to deregulate trading hours, and the referral of industrial relations powers to the Commonwealth for unincorporated businesses, are just some of the reforms that would help spur new private sector investment and drive down the high costs of doing business at a time when the economy really needs it.

With less than 18 months to the next state election, both parties have time to present their economic reform credentials that will provide the spark – not stimulus – needed to ensure WA can safely scale down the looming investment cliff and emerge a more efficient, competitive and diverse economy.