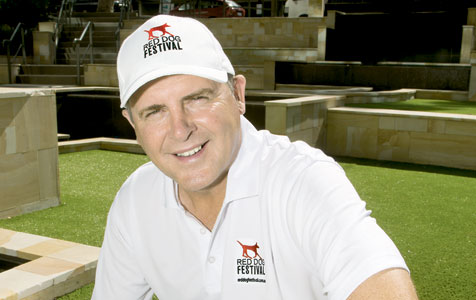 EVENTS industry veteran Peter Kay is little more than a month away from launching his latest venture – the 2013 Red Dog Festival, in the Pilbara – amid a host of challenges posed by a changing sponsorship landscape.

As managing director of boutique event management consultancy, Event Alliance International, Mr Kay has witnessed first-hand the extent to which the corporate sector has reined-in its support for events, but is confident the Red Dog Festival will pique the interest of sponsors and the public alike.

Mr Kay said those trying to launch new events were feeling the write-down in corporate sponsorship budgets most keenly.

“The market has really tightened up in the last 12 months and the knock-on is substantial when you’re setting up new events,” he said.

“In 2010 the market was good, companies were spending their dollars; however since then there’s been quite a noticeable decline in the level of support for events in WA.”

Mr Kay said sponsors had started to change the way they wanted to engage in events.

“There has been a shift in the way companies view events; they want to be seen to be supporting the community. Before, they wanted to be seen as owning events with their brand at the centre of it,” Mr Kay told Business News.

“Now, corporates are focused on being a part-player in the event, as contributing to it rather than owning it.”

Mr Kay said the two-day Red Dog event aimed to bring people together to enjoy the Pilbara in a safe environment.

“The event provides the Pilbara with something they can call their own,” he said.

“It’s about a shared experience with your team and having fun, it’s not meant to be a high pressure, high fitness and skilled event.”

To be held in June, the festival involves teams completing eight activity legs, which range from road cycling to 4WDing over the course of two days in the Pilbara, using Karratha as a base.

While new events, including the Red Dog Festival, are struggling to attract major sponsorship, they also face a battle to stand out in a crowded marketplace and ensure their event has a clear identity.

“Trying to educate the market about what the event is all about is a tough challenge and the first hurdle when you’re trying to give traction to a new event,” Mr Kay said.

Mr Kay, who has 20 years’ experience in the events industry, said he was confident that, despite current challenges, the Red Dog Festival had a positive future.

“It is always tough in a first year market, however once we get over that first hurdle awareness levels will rise and have a positive flow-on with sponsorship take-up,” he said.

“From there we can build the event into something that is sustainable and delivers for communities in the Pilbara and participants across WA.”

Registrations to take part in the Red Dog Festival close on April 30, with the event to be held on June 1 and 2 as part of the Celebrate WA Day long weekend.