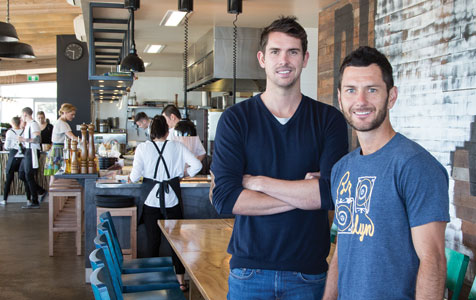 Such is the focus on excellence required by Olympic athletes to succeed at sport, it’s no great leap to assume such application would have a positive effect in other aspects of their lives.

Such as in business, for example.

So when three Olympians team up to open a restaurant there’s a high chance they’ll be on a winner, even if just about every aspect of the planning stages hits a hurdle.

However the lead-up to opening was plagued by liquor licence approval delays, building constraints and a triple sub-leasing arrangement, where the land owned by the Crown was sub leased to the City of Fremantle, which sub leased it to the surf club.

To transform the space above the old surf club, Mr Sullivan and his architect father had to get every change approved on the lease by the surf club, the council and the state government. Then, when everything was up to code and approved by council, the liquor licensing application had to be dealt with.

The director of liquor licensing ruled the patrons’ communal hand basin posed a threat to alcohol safety, and that the men’s and women’s bathrooms required separate hand basins.

This was a major setback, as Mr Sullivan had intentionally designed a communal hand basin outside the bathrooms to improve customer hygiene – drilling through the slab, re-routing waste pipes and arranging approvals in the 12 months prior.

“So after all the money we spent getting that approved, liquor licensing said we need to change it and we actually physically couldn’t do it. We had to find a solution so we found water saving toilets that have hand basins on top,” Mr Sullivan said.

Despite the challenges, Mr Sullivan said he’s glad to have opened his second cafe, which follows coffee shop Louis Baxter in Subiaco.

“I was glad everything did go wrong because if it didn’t it would have just been a false representation of what hospitality was like,” Mr Sullivan told Business News.

“If we went to do it again we’d think it was easy, and if things went wrong we wouldn’t have been ready for it. If we did want to do another venture, we’ll be prepared for anything.”

Mr Dwyer, who credits Mr Sullivan with doing most of the work setting up Bib & Tucker, said the three friends’ competitive nature had come in handy for strategy more than for publicity.

“Because we’re athletes we always keep striving, keep pushing ourselves,” he said.

“Eamon always tries to get better times in a lap, I’m always trying to be a better hockey player, Steve always wants to jump higher. We always want to continually improve and I think that’s the advantages that we have as athletes running a business like we have.

Mr Sullivan agreed that celebrity had its benefits, but said you had to be able to back your claims up.

“I think we were lucky to have (our sports status) as a marketing tool but I think that wears off. You can be Leonardo DiCaprio, but if you’re serving Heinz beans on toast for $50 a pop you wouldn’t get people coming back,” he said.