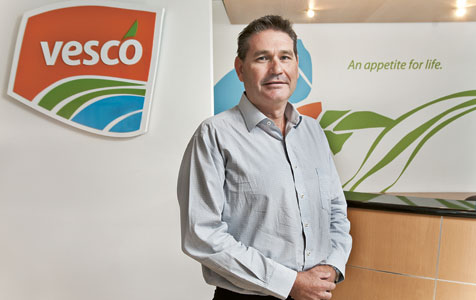 Vesco chief executive Bernie Pummel will be retained to head up the merged group.

National private equity group Catalyst has made its second acquisition in Western Australia, buying frozen foods manufacturer Vesco and announcing plans to merge it with an east coast food business.

Vesco, which had been owned by Champ Private Equity since 2003, manufactures frozen meals and meal components which are sold under the Tukka Tubs, Ready Go Eat and 7 Star Food Service brands, among others, at Coles, Woolworths and Aldi supermarkets.

Catalyst plans to merge Vesco, which was shortlisted as a finalist in Business News’ 2013 Rising Stars awards, with Queensland-based Prepared Foods Australia, which manufactures frozen food products for the health and hospitals sector.

Catalyst executive director Aaron Hood said the merger was a good fit for both companies.

“So to have a dual site offering and to be able to spread your cost base and have a larger sales base over the two sites is a good strategy for us.

“It is a scenario of one plus one gives you more than two, because big retail customers like the fact that you can supply them from two sites.

“If anything was to go wrong at one site you can continue to supply them.”

Mr Hood said Vesco chief executive Bernie Pummel would be retained and head up a new management team to oversee the merged company, which would have a turnover of about $150 million annually.

The Vesco name and manufacturing base in Osborne Park will be retained, as will the Prepared Foods Australia factory in Queensland.

Rural bank Rabobank will support Catalyst in the venture.

Mr Hood said Catalyst would look to use Vesco as a platform to acquire other food businesses around the country.

“We target two things; either frozen pre-prepared meals; or the chilled meal segment,” he said.

“Chilled food is becoming an emerging trend in the category, that’s something we don’t do today and could be a logical acquisition in the near future.”