Having been through a number of incarnations, PICA Bar & Cafe has settled on a winning formula in the heart of the Cultural Centre. 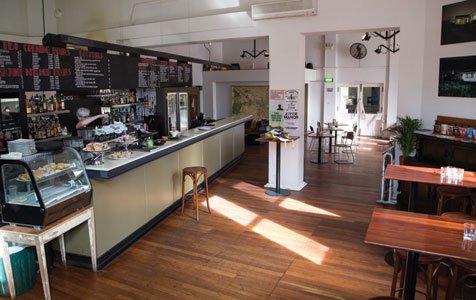 Having been through a number of incarnations, PICA Bar & Cafe has settled on a winning formula in the heart of the Cultural Centre.

It was just three years ago that he sought to move away from his career in finance, deciding, with his brother, to approach the Perth Institute of Contemporary Art to see if they could take over its bar and cafe in the heart of the Cultural Centre, which had opened and closed a number of times over the years.

“Neither of us had any hospitality experience whatsoever but we figured we’ve been in a lot of bars so how hard could it be, not realising how little we actually knew,” Mr Buckley told Gusto.

After a lengthy back and forth with the bar’s previous owners, PICA Bar & Café (re)opened its doors in January last year.

The new owners had to learn virtually everything from the ground up, and Mr Buckley admits it was a tough slog at first.

“At the start we didn’t even have food, we just sort of threw the doors open because the Fringe Festival was on and we thought we should,” Mr Buckley says.

Since then, PICA Bar has expanded its menu to include a wide range of cocktails and craft beers, and its breakfast and lunch offerings have won an 88 per cent approval rating on Urbanspoon.

While the small bar scene in Northbridge has become highly competitive in recent years, Mr Buckley says PICA Bar attracts a broad church of punters thanks to its casual approach.

“At a lot of the places in Perth, you can’t come in without leather shoes, you’ve got to wear a collared shirt, you’ve got to do this or do that,” he says.

“We just want a place where anyone can rock up, which we do have.”

Throughout the summer months, popular events such as the Fringe Festival and Perth International Arts Festival draw thousands of punters to Northbridge and ensure the bar is frequently packed to capacity, with the beer garden a popular venue for the after-work crowd.

Pulling a crowd in the winter months becomes much more of a challenge, however.

To combat this, PICA Bar has taken to hosting live bands most weekends in an attempt to keep the punters coming, and there are plans for more events to be hosted in the Cultural Centre.

Now, about 18 months after the new PICA Bar opened for business, Mr Buckley says he has no regrets about plunging himself into the often risky hospitality industry, despite admitting he often puts in 60-70 hour weeks behind the bar.

“Some days are fantastic; some days you want to kill each other and you think it’s the worst idea you’ve ever had,” Mr Buckley says.

“But overall it’s been the best thing I’ve ever done and it’s been a lot of fun. Given the chance again, there’s no way I would have stayed in an office job.”