Cars and darts in bar plans

A proposed venue is offering punters the opportunity to get behind the wheel of a F1 racing simulator, while another aims to give patrons the chance to electronically emulate world darts champion Phil ‘The Power’ Taylor, as Perth’s small bar scene gets increasingly diverse. 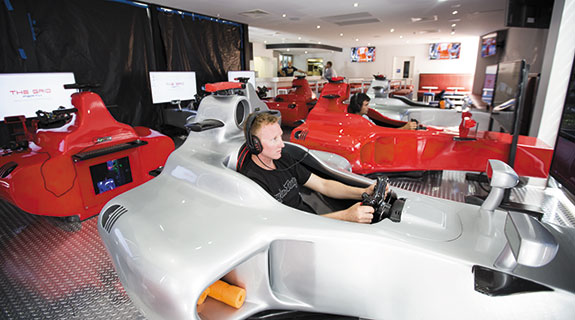 ON TRACK: The Grid's fitout is ready to go, with a liquor licence the remaining formality. Photo: Attila Csaszar

A proposed venue is offering punters the opportunity to get behind the wheel of a F1 racing simulator, while another aims to give patrons the chance to electronically emulate world darts champion Phil ‘The Power’ Taylor, as Perth’s small bar scene gets increasingly diverse.

Recent applications lodged with the Department of Racing Gaming and Liquor reflect the lengths to which prospective publicans are starting to go in Perth to help satisfy the rigorous ‘public interest assessment’ required to secure a liquor licence, as well as establish a unique point of difference.

On William Street in Northbridge, a small bar named The Grid Racing Perth has been proposed at which patrons will have the opportunity to have a drink while competing against up to seven of their friends using state-of-the-art Formula 1 racing simulators.

Local corporates can also get a slice of the action, with The Grid selling advertising space along the virtual tracks as well as livery on the cars themselves.

Husband-and-wife team Rod and Pamela Zakostelsky have proposed The Grid Racing Perth in collaboration with John Hall, who already operates similar venues in Sydney and Melbourne.

Also in Northbridge, a franchise of the international iDarts chain, which originated in Hong Kong and has a growing following in Japan, has been proposed to be established in a small bar on James Street near Chinatown.

The iDarts model has been described as a high-tech update of the sport of darts; instead of sharpened points, the darts operating system is based on electronic boards and soft-tipped darts.

Sensors, lights and audio, as well as computer graphics, interact with the player. Players are also issued with a membership card that enables them to compete internationally through the iDarts network, which has venues operating in Macau, Singapore, Taiwan, Malaysia and Thailand.

Meanwhile, plans are under way in Fremantle to convert one of the city’s tiniest heritage-listed buildings into a small bar.

The City of Fremantle recently agreed in principle to a 15-year lease of the historic weighbridge station at 2 Phillimore Street, which, if approved, will be transformed into a small bar and cafe.

The building totals just over 24 square metres, however, preliminary concept plans comprise a 289sqm area, mostly alfresco, to cater for up to 75 patrons.

The proposal is another in an increasing number of Perth small bars to eschew maximum occupancy limits of 120 in favour of creating more intimate venues.

Prominent super small bars in Perth include Juanita’s in Subiaco, where the City of Subiaco approved an increase in its capacity from just 45 to 65 in October, and Swallow Bar in Maylands, which has a maximum capacity of 60.

Lavan Legal partner Dan Mossenson, who specialises in liquor licensing, said the smaller capacity pubs were a reflection of the diversity of venues that have been established in Perth in recent years.

“A few times we’ve had clients who have been aggrieved by the limitation on the capacity of their premises, but it’s usually a reflection on the size of the facility,” Mr Mossenson told Business News.

“But on the other hand, you’ve got people who have deliberately designed and pitched smaller-type operations, which are more intimate and able to be run and operated with that particular focus in mind rather than a slightly larger, noisier type venue that doesn’t have the intimacy.”