Brett Carboni has Nobu in his sights with the appointment of a new head chef and the opening of a fine-dining restaurant in Mosman Park. 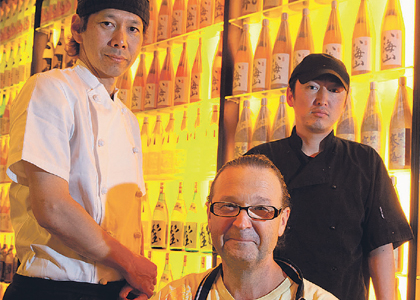 Brett Carboni has Nobu in his sights with the appointment of a new head chef and the opening of a fine-dining restaurant in Mosman Park.

BRETT Carboni says the arrival in Perth of international Japanese restaurant, Nobu, at the start of the year was a game-changer.

It has certainly changed the way Mr Carboni, the owner of Tsunami in Mosman Park, goes about his business.

Nearly a decade and a half after Tsunami opened its doors, Mr Carboni has put a second player on the field -Fuku - an intimate, fine-dining restaurant next door to his Tsunami.

And he is poised to launch a new, contemporary menu at Tsunami under the leadership of head chef, Akio Kitakawa.

Fuku is a 16-seat restaurant that draws inspiration from Mr Carboni’s dining experiences in Japan.

“In Japan everything’s done on a very small scale; for instance, I know a guy in Osaka who had a bar that sat eight customers,” Mr Carboni says.

“In Japan they have that intimate atmosphere and that’s what we’re creating here.”

Fuku may reside next door to Tsunami and serve the same cuisine; however, it offers a completely different service.

Whilst Tsunami operates like a normal restaurant, Fuku only offers three set menus that range from $110 to $260 and customers have the option of matching wine or sake to their meals for an additional $75.

“Rather than trying to do everything at Tsunami we established Fuku to target the high end,” Mr Carboni says. “It is totally separate from Tsunami, you can’t ring to make a booking as there’s no telephone here.”

Instead Mr Carboni has elected to exclusively use online booking, and an outdoor lantern to signify if any seats are available.

“You might ask why we don’t take phone bookings ... the first week we started we had a phone booking for 10 people on Friday and they just never showed up,” he says.

“And then the next day a 10-person booking for Saturday night didn’t show...you can’t have that in a place like this, it only seats 16 people.”

To enter the restaurant patrons must use an intercom at the gold and glass front door.

He says Fuku has the largest Sake collection in Perth, with 500 bottles lining its back wall, while the decision to specialise in teppanyaki and sushi was deliberate.

“You won’t see a set-up with high-quality sushi and teppanyaki anywhere in the world. Usually you have teppanyaki and they bring you out some sashimi that’s been prepared in the afternoon ... it’s an afterthought.

The quest for top-quality Japanese fare is also present in the sourcing of ingredients.

“The menu is dictated by what is fresh ... the produce is paddock to plate, it comes straight from the farmer to us,” Mr Carboni told Gusto.

The quails come from a farmer in the Hunter Valley and are the biggest in the world, and the Wagyu beef comes from Mayura Station in South Australia - the place Rockpool sources its steak.

The second weapon in Mr Carboni’s arsenal is Akio Kitakawa.

He was hired last month as Tsunami’s new head of operations, to fill the place of Tetsuya Sakamoto who has moved next door to head-up Fuku.

“There’s a saying in the Japanese sushi industry that if you want to kill a Nobu you need a Morimoto, and Akio’s our Morimoto.”

The new menu will feature dishes such as sushi pizza and shrimp carpaccio.