Capitalising on a jolly good decision

JOLLY Good Indian restaurant owner Dean Bedi says having his head chef quit unexpectedly was the best thing that ever happened to his business. 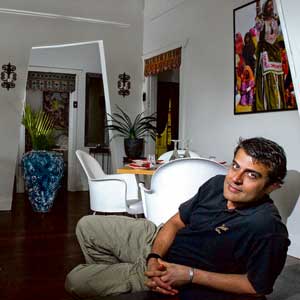 JOLLY Good Indian restaurant owner Dean Bedi says having his head chef quit unexpectedly was the best thing that ever happened to his business.

"When we started it was more jolly bad Indian," he told Gusto.

In 2006, Mr Bedi decided to turn his former sandwich shop at 1,004 Beaufort Street into an Indian restaurant because he believed there was potential for that type of venue in Inglewood.

But, having only a few contacts in the industry, he was a little underdone when it came to employing a chef in the first few months of Jolly Good Indian.

Then, out of the blue, Mr Bedi says, the chef - the only person capable of cooking authentic Indian food - quit suddenly after Mr Bedi told him he was unable to sponsor his brother.

Although the situation was stressful, he says it forced him to give someone else a go, which brought a unique - and better - standard of cuisine to the restaurant.

The change didn't happen without a few hurdles, however.

"When my first chef left the business, I put an ad in the paper and a guy from Afghanistan came through the doors one day, telling me he can cook Indian cuisine," Mr Bedi told Gusto.

"I asked him to cook me a butter chicken, a lamb roghan josh and some rice, and it was some of the best Indian food I'd ever had; he used to work for restaurants in Fremantle and Subiaco for the past 15 years," he says.

However, the next challenge was just around the corner.

"I could see my chef was getting bored after about eight months. He gave me all his recipes, which he normally was quite secretive about, and told me I would be fine cooking the food myself," Mr Bedi says.

"You can give the same recipe to two people...the final results are going to be very different."

Mr Bedi says he spent months reading books and learning about the art of cooking.

"I discovered that it is all about smelling, listening and looking at the food...my passion for cooking came from within," he says. "Now I do all the cooking. I can only cook 10 items but I do it very well and people love that the menu is simple."

Mr Bedi believes he brought a different take on Indian cuisine by not putting chilli in every dish and using higher quality meats, such as tenderloin, rump and lamb.

"I know I have annoyed a few people who say it's not [real] Indian food," he says.

Mr Bedi took over the venue that was to become his sandwich shop in 2005, after managing the Terrazza Café and Restaurant in Morley for three years.

"I called it Spy Café because I though the word spy was a great name to arouse the curiosity of people walking by...but it didn't work," he says.

A lot of people who walked into the café asked for Indian food and, when a neighbouring shop-owner advised him to get into curries as well, Mr Bedi turned Spy Café, which was close to bankruptcy, into Jolly Good Indian.

A Curtin University business graduate, he says he never had a formal education in hospitality, but an eclectic career as an air steward and marketing executive exposed him to the dining culture.

The popular restaurant is set up in a 1930s-style house, has a cosy and intimate feel and seats 20 people.

A fairly simple menu offers Indian cuisine basics in a décor and atmosphere that are more Western inspired.