Canberra gets a taste of the Swan Valley

For the past nine years, City of Swan Mayor Charlie Zannino has made an annual trip to Canberra, usually with his deputy and a couple of staff in tow. 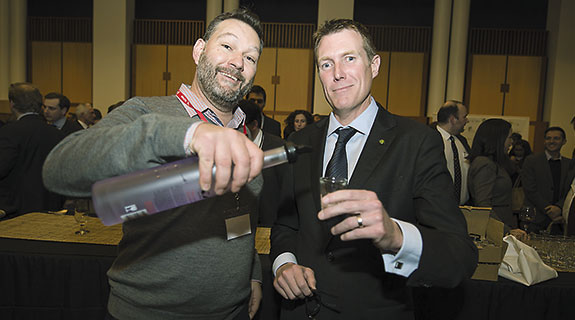 For the past nine years, City of Swan Mayor Charlie Zannino has made an annual trip to Canberra, usually with his deputy and a couple of staff in tow.

This year he took a much larger entourage – 28 Swan Valley businesses.

The idea of taking regional businesses to Canberra was sparked last year when Mr Zannino discovered the parliament house dining room had no wine from the Swan Valley.

When he asked about this, the headwaiter said: “Why don’t you bring some and give us a taste?”

So he did, and four Swan Valley wineries joined him – Olive Farm, Sandalford, Sitella and Trandos Estate – along with Feral Brewing Company and Wild Swan Distilling Co.

They were joined by an array of other Swan Valley businesses in the food, clothing, art, dance and tourism sectors.

The Swan Valley contingent took over the great hall at parliament house last Tuesday for a showcase that attracted an estimated 500 guests, including Prime Minister Tony Abbott.

Sandalford chief executive Grant Brinklow described it as a fantastic initiative, adding the City of Swan has become very proactive in supporting business.

As one of the most established winery and wine tourism operators in the Swan Valley, Mr Brinklow was keen to attend.

Sandalford’s Dean Williams was one of four executive chefs who went to Canberra to prepare food.

“There was a real diversity of operators,” Mr Brinklow said.

He never expected immediate extra sales from the trip, instead aiming for long-term benefits.

“It’s like a pebble in a pond, you don’t know where the ripples will end,” Mr Brinklow said.

Parliamentary Secretary to the Prime Minister, Christian Porter, whose electorate of Pearce covers the Swan Valley, said he was pleased to see so many local businesses showcasing their produce.

“The event was a huge success and I was proud to help highlight the food, wine and culture from the Swan Valley region to my federal colleagues,” he said.

Gomboc Gallery Sculpture Park, one of the state’s oldest privately owned galleries, used the showcase to illustrate its wide range of artworks.

Mr Zannino said the event’s financial viability was greatly helped by support from Linfox, which transported all of the display material at no charge.

Each of the participating businesses was left to cover its own travel and accommodation costs.

“It’s the businesses that will reap the benefits, if there are benefits to be reaped,” Mr Zannino said.