Troy Buswell’s confessional profile in last weekend’s press is the next step in his quest for the state’s top job. 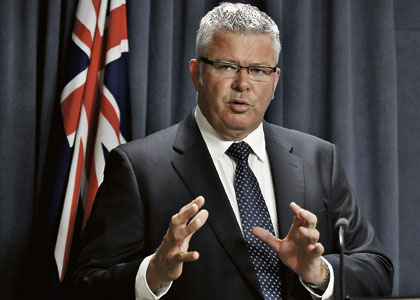 MEET TROY: Troy Buswell believes he’s the man for the job, but needs to convince his colleagues and the public – particularly many women voters. Photo: Grant Currall

Troy Buswell’s confessional profile in last weekend’s press is the next step in his quest for the state’s top job.

FANS of the hit television show The Sopranos will know that a central premise of the award-winning drama is mafia boss Tony Soprano’s therapy sessions with his shrink, the seductive Jennifer Melfi.

This intriguing construct allows the audience to get up close and personal with the motivations, angst and possible redemption of a mafia Don as he struggles with the demons of his job and contemporary family life.

The counselling sessions take us beyond the black and white themes of loyalty, betrayal and retribution so brutally and brilliantly portrayed in The Godfather trilogy.

Part of the appeal of The Sopranos is the ability of the writers to create audience sympathy for Soprano despite his womanising, murdering, bullying and manipulative ways.

This drama is as good as it gets and would make both the ancient Greeks and Shakespeare proud of the complexity and breadth of the story telling.

I was reminded of Soprano when reading ‘You are What You Are’, the profile confessional about Treasurer Troy Buswell in last weekend’s The Sunday’ Times.

This article shares many similarities with the hit TV show: Mr Buswell talks of his struggles with his overexuberant personality; his flaws in judgment; his infidelity; his chair sniffing; and the very real and sad circumstances surrounding his childhood.

Like Soprano, a central theme of the profile is Mr Buswell talking about his sessions with a counsellor and his realisation at the end of the day that, ‘you are what you are’.

The profile is full of existential angst and invites us, as the journalist concludes, to accept that there is more to Mr Buswell than we realised.

This story was not written by chance. It was not written by a journalist with a long association with his subject, as was the insightful profile written years ago by the late Matt Price when he profiled his friend, former colleague, Dockers supporter and then premier Alan Carpenter, for The Australian Magazine.

Price, one of the finest journalists this state has produced, was also a long-time journalistic contemporary of Mr Carpenter’s when he was a journalist at Channel Seven and later the ABC.

It was a remarkable piece of sophisticated reporting because of the way in which Price managed the relationship, respect and friendship that existed between writer and subject.

The profile of Mr Buswell, with the carefully staged photograph of him leaning exhausted over the ropes at an inner-city gym, evokes the image of the driven, early morning disciplined executive, and signals the beginning of a deliberate strategy to position the wayward treasurer as the premier in waiting.

Throughout the staged interviews, his political and media minders are ever present to ensure the appropriate counterpoints to the very carefully offered insights provided by the subject

As someone who has worked with political leaders, aspirants and other public figures for nearly two decades, I have been expecting some kind of ‘confessional’ and redemption media strategy from Mr Buswell.

I say this because the treasurer is a driven alpha male and has his sights firmly set on being premier of Western Australia. I know this because I have worked up close with the on-again, off-again and on-again treasurer.

I make the following observations as to his ambitions.

There are very few people with the self-belief that they have the experience and ability to not only lead their party, but also assume the responsibilities of being premier after being in parliament for less than three years.

You only have to ask Colin Barnett what it takes to be that person, after serving a nearly 20-year apprenticeship before finally being ready to assume the role.

When Mr Barnett was chosen to take over from Mr Buswell in 2008 it was pretty much on the understanding that, when the time was right, the latter would again assume the job as Liberal leader and fulfil his ‘destiny’ to become premier.

The game plan was that Mr Buswell would work hard as treasurer to redeem his reputation, prove himself, stay out of trouble, and when Mr Barnett had delivered Oakajee and James Price Point, he would take over.

This plan all came unstuck with his well-documented extramarital affair with Adele Carles and the rise of former attorney-general Christian Porter.

At that stage it looked as though the game was up, with the premier benching Mr Buswell because of perceived improprieties around the liaison.

All changed earlier this year, however, when Mr Porter decided he was no longer challenged by the job of being both attorney-general and treasurer and decided to pull the pin on state politics.

This unexpected change has provided Mr Buswell with his second, if not third, bite at the cherry.

The trouble for the Liberal Party and the government is that the problems that beset Mr Buswell when he was asked to make way for Mr Barnett in 2008 haven’t been fully resolved in the minds of his colleagues and, more importantly, the electorate.

Hence the need to do a full-scale confessional media interview and begin the public rebuilding process.

Since returning to the cabinet last year, Mr Buswell has worked hard to curry favour with colleagues; especially following the mauling he gave Peter Abetz both inside and outside the parliament.

The Liberal Party also knows that while Mr Buswell is the obvious choice to takeover as premier if the government is returned at the next election, he remains a potential liability, especially among women voters.

Throughout The Sunday Times profile, Mr Buswell was careful not to express his desire for the top job, knowing full well that the Labor Party will try and demonise him in the same way the Liberals so successfully demonised Brian Burke at the last election.

This is a carefully constructed ploy to ensure that, when he does assume the role of premier sometime in the next term, it happens with the full support of his colleagues - ensuring that the redemption is complete.

There is no doubt that Mr Buswell is a gifted and talented politician, probably the most gifted since a young Mr Burke entered our political consciousness back in the early 1980s, and before he let the whole thing go to his head.

It remains, however, to be seen whether voters will be so keen to find out. The one thing we can be sure of is that Mr Buswell will not let us die wondering.

• Paul Plowman is a former head of the state government's media office and is currently MD at Plowman & Co, which specialises in business-to-government relations.