Calidus Resources has uncovered multiple walk-up exploration drill targets from a detailed soil sampling program across its flagship Warrawoona project, located 25km south of Marble Bar in the east Pilbara region of W.A. All targets lie within a 15km radius of Calidus’ major Klondyke deposit. The cashed-up explorer is continuing its infill and extension program ahead of a resource upgrade due in the December quarter. 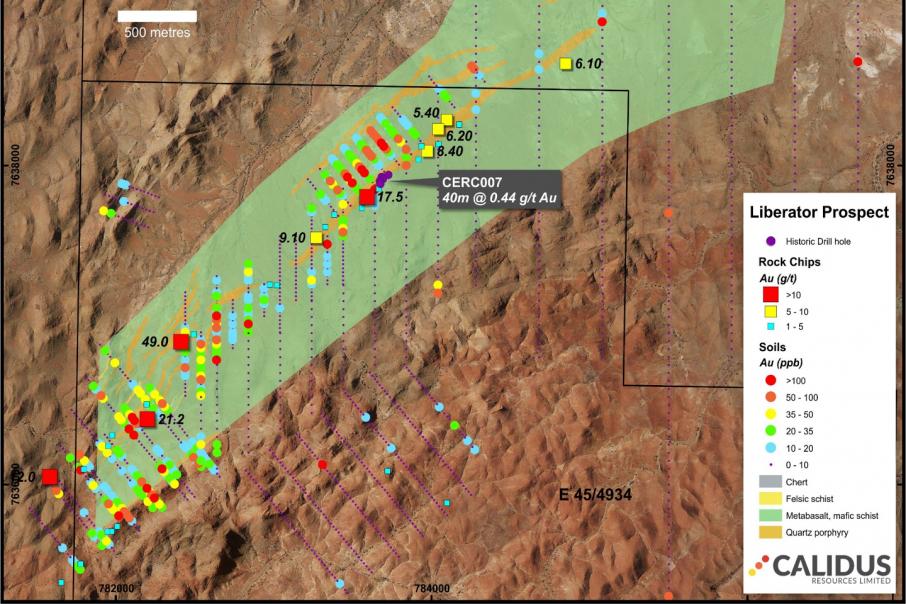 The encouraging anomalous gold results have the potential to add considerable scale to the existing project, with limited regional exploration and fragmented ground ownership over the last 30 years hindering a thorough evaluation of the area.

These new anomalies provide the company with a platter of surface gold occurrences over some serious strike lengths at Warrawoona and they have also reaffirmed Calidus’ belief in several historical artisanal mines and workings in the area.

The Warrawoona structure is one of the largest greenstone-hosted goldfields in the east Pilbara region and the new soil program has thrown up 10 distinct anomalous targets for the company to pursue.

All the anomalies lie within a 15km radius of the company’s major Klondyke deposit that already boasts a mineral resource of 654,000 ounces of gold and is open along strike and down-dip.

When added to other nearby prospects, Calidus already has a total of 712,000 ounces in resources at the Warrawoona project.

In the recent exploration program, a strong clustering of extensive gold-in-soil anomalies with coincident high-grade rock chip samples up to 49 grams per tonne gold were returned from the Liberator prospect, at the far western end of Warrawoona.

This area has long been on Calidus’ radar, with limited shallow drilling undertaken in the late 1990s returning results up to 40m @ 0.44g/t gold directly from surface.

The company’s soil sampling program has confirmed that gold anomalies extend over 4km of strike length and 350m of width at the Liberator prospect, with Calidus saying that an RC drilling program is being compiled to test the most coherent soil anomaly there.

New targets were also established around the historical high-grade gold workings at the Trump, Cutty Sark and Salgash prospects which lie to the northwest of the Klondyke ore system on the same prospective shear zone.

Other strongly anomalous gold in soil assays were reported from the Klondyke East, Horrigans, Charlie’s Extension, Ada and Brockman-Hay Shear prospects giving company geologists a lot to chew over in the coming months.

Calidus Managing Director Dave Reeves said: “The dimensions of these soil anomalies are several orders of magnitude higher than the average background gold mineralisation values which is very encouraging at this early stage. We believe this supports the potential of the project to generate multiple near surface targets.”

“Detailed geological mapping and drill testing under selected high-priority targets will be undertaken during the year.”

With so much prospective real estate in the mix, Calidus is quickly closing in on the magical million ounce resource mark.

The company is scheduled to announce an upgrade of its resource inventory in the December quarter this year, which will underwrite a PFS set down for completion in the first half of 2019.