Calidus Resources has entered into a Heads of Agreement to earn up to 70 per cent of the prospective looking Otways Project, located just 50km from its flagship Warrawoona gold project in the Pilbara. The initial part of the deal with ASX-listed Rugby Mining Limited, will see Calidus spend $200K on the Otways project and put 1,200m of RC drilling into it over 12 months. 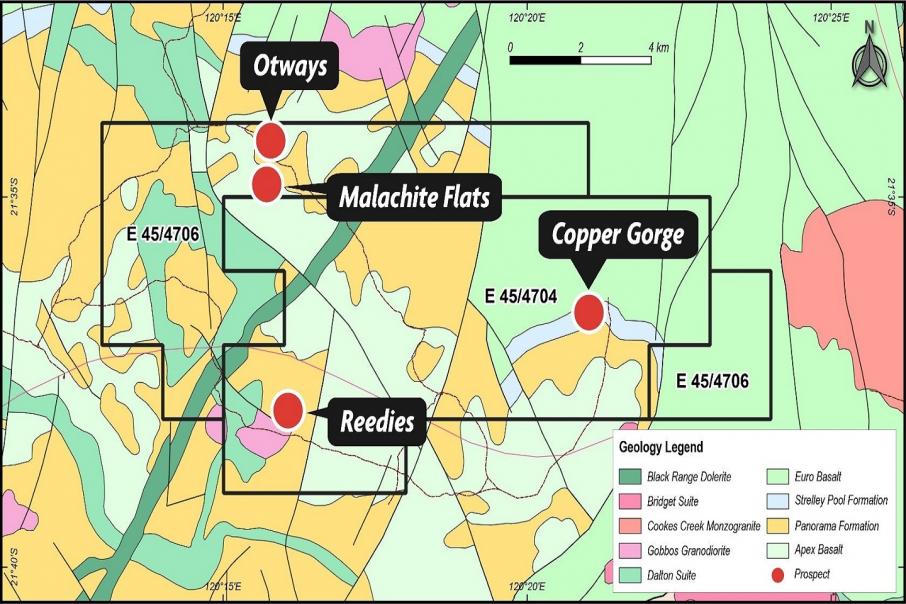 Calidus Resources has entered into a Heads of Agreement to earn up to 70 per cent of the prospective looking Otways Project, located just 50km from its flagship Warrawoona gold project in the Pilbara. The initial part of the deal with ASX-listed Rugby Mining Limited, will see Calidus spend $200K on the Otways project and put 1,200m of RC drilling into it over 12 months.

According to the company, the Otways project is prospective for a mixture of deposit types and associated metals, including copper-gold at the Doherty and Reedies prospects and copper-lead-zinc mineralisation at Copper George.

As a bonus, the Malachite Flats prospect, which sits just north of the Otways prospect, has a large coper-gold geochemical anomaly that is coincident with an electromagnetic anomaly and more significantly, it has not previously seen any drilling - yet.

Another significant intercept from the 1960s drilling includes 48.8m to the end of hole grading 0.62 per cent copper that may just be an indication of something more substantial close by.

An exploration program in the 1970s was hampered by poor drilling recoveries and a rig that was not fit for purpose that was limited to just 70m depth or less. Inexplicably, less than one quarter of all drilling samples were analysed for copper - and again, no gold was analysed.

Calidus even noted that the Geologists at the time noted visible sulphide minerals, however some or most of these samples never made it to the lab to be analysed.

However, in the late 1980s, a stream sediment and trench sampling program seemed to suggest significant mineralisation is present, with one metre samples taken from the trenches assaying up to an impressive 13 grams per tonne gold and an even more impressive 9 per cent copper.

The Reedies prospect is proximal to the ‘Gobbos Granodiorite’ and is associated with a porphyry molybdenum-copper anomalism. Calidus mentioned the presence of “stockwork” mineralisation that is hosted within altered volcanic rocks and by the Gobbos Granodiorite itself.

Calidus’ Warrawoona gold project lies just 50km to the north of the Otways project, which may provide some synergistic processing options if Calidus can replicate its success at Warrawoona over at Otways.

Importantly, the company said the region has been lacking systematic analysis and modern exploration techniques which it will seek to deploy.

Under the terms of the deal, Calidus has an option to increase its spend on the Otways project to a further $500K, which will include a minimum 3,000m of RC to be completed within 30 months in order for Calidus to acquire a 50 per cent stake.

The company even has a further option to spend an additional $500K and plough in another 3,000m of RC drilling within 48 months of the agreement’s commencement date to earn 70 per cent.

To take up the 70 per cent option, Calidus must also issue $250K worth of its stock at the completion of the required spend using a 20 day VWAP.

Calidus Managing Director, Dave Reeves said: “As we move towards development of the Warrawoona Gold Project, we are looking to expand our Pilbara exploration potential to ensure a healthy pipeline of gold projects as both satellite deposits for Warrawoona and as potential standalone developments”…

”The tenements have some prior exploration with impressive initial copper intercepts but they have never been assayed for gold which remains our core focus. The project area has confirmed porphyry-style mineralisation outcropping at surface, and we believe the upside is substantial."

The Warrawoona gold project has a maiden ore reserve of 8.9Mt grading 1.5g/t for just under 420,000 ounces of gold at the proposed Klondyke open pit and underground mining operation.

The company’s pre-feasibility study demonstrated a robust project with a life of mine all in sustaining cost to produce of just AUD$1,159 per ounce and Calidus said that its definitive feasibility study is on track to go live by the end of this quarter.