Calidus Resources have wrapped up control of the highly prospective greenstone belt at their flagship Warrawoona project under an innovative joint venture with neighbouring explorer Novo Resources. The deal will see Calidus earn up to 70% of the rights to any gold discovered in the basement rocks on Novo's tenements and provides a consolidation opportunity for Calidus that has eluded previous operators. 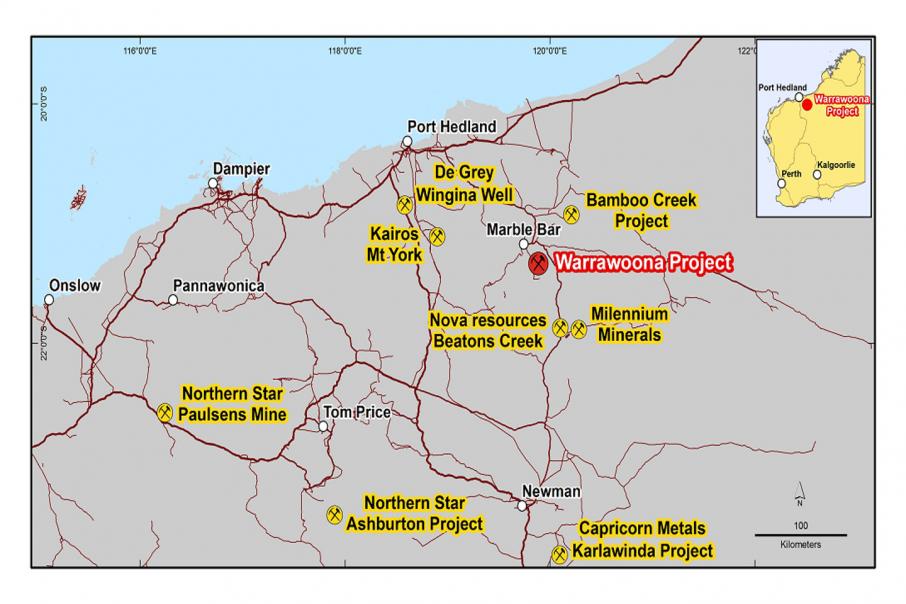 Calidus Resources have doubled their land holdings around their flagship Warrawoona gold project near Marble Bar under an innovative joint venture with Canada’s Novo Resources.

Novo emerged as one of the world’s hottest gold explorers this year after its discovery of gold in conglomerate beds near Karratha, about 250kms west of Marble Bar.

The company has set the market alight with its theory of a look-a-like to South Africa’s Witwatersrand gold belt and has pegged thousands of square kilometres around Karratha.

The Canadian explorer has also been aggressive in picking up tenements around Marble Bar and Nullagine, including 184 square kilometres around Calidus’ Warrawoona project.

In an innovative deal announced this week, Calidus now have the right to earn up to 70% of any gold discovered in the basement rocks in the adjoining Nova tenements.

The Nova tenements include extensions of the Klondyke Shear, where drilling by Calidus in greenstone basement rocks has produced spectacular results this year.

The deal not only gives Calidus a stranglehold on the Warrawoona greenstone belt, but it also provides access to Nova’s technical data and aligns Calidus as a strategic partner with one of the world’s hottest gold explorers.

Calidus Managing Director, Dave Reeves, said: “With the execution of this agreement we now control the vast majority of this highly prospective greenstone belt. With drilled mineralisation extending 4km directly to the east of the current resource, highly prospective drill intercepts in satellite areas and substantial undrilled soil anomalies, the area provides significant upside to the Warrawoona Project. Such a transaction benefits both parties by providing critical mass in one area thereby enhancing the potential for development of a standalone operation in the area. I look forward to working with Novo as we continue to rapidly advance this enlarged project area.”

Under the joint venture deal, Calidus has a 60-day due diligence period, after which it will issue 20 million shares to Nova and spend $2 million on the Novo tenements over the next three years. This will entitle Calidus to a 70% stake in all gold in the bedrock section of the tenements.

The Nova tenements are littered with drill hits from historical gold exploration, many of which were never followed up because ownership of the Warrawoona belt was always split between multiple parties until Calidus consolidated it this year.

The new tenements include a 5km extension of Klondyke shear to the southeast of Calidus’ current land holdings, where limited drilling by Rio Tinto in 1996 returned results that included 2 metres @ 5.58 g/t gold from 31 metres and four metres at 4.35 g/t gold from 141 metres.

A drilling blitz by Calidus on the Klondyke Shear recently revealed continuous mineralisation on a 2.6 km-long trend, which remains open at depth and along strike in both directions.

Other highlights of the new tenements include a 5 km-long gold soil anomaly, parallel to and 800 metres north of the Klondyke Shear, which has never been drill tested.

The deal places Calidus in an enviable position denied to previous operators at Warrawoona who were never able to pull together material amounts of contiguous ground.