As Calidus Resources rolls on towards the end of a successful field season at its Warrawoona gold project in the East Pilbara of WA, a suite of exciting assays have come in that may provide a boost to its 1.25 million ounce resource. Drilling up to 200m below the base of the proposed open cut mine hit 1m @ 55.2g/t gold and 1.11m @ 31.2g/t gold – giving the company a hint that an underground operation just might fly. 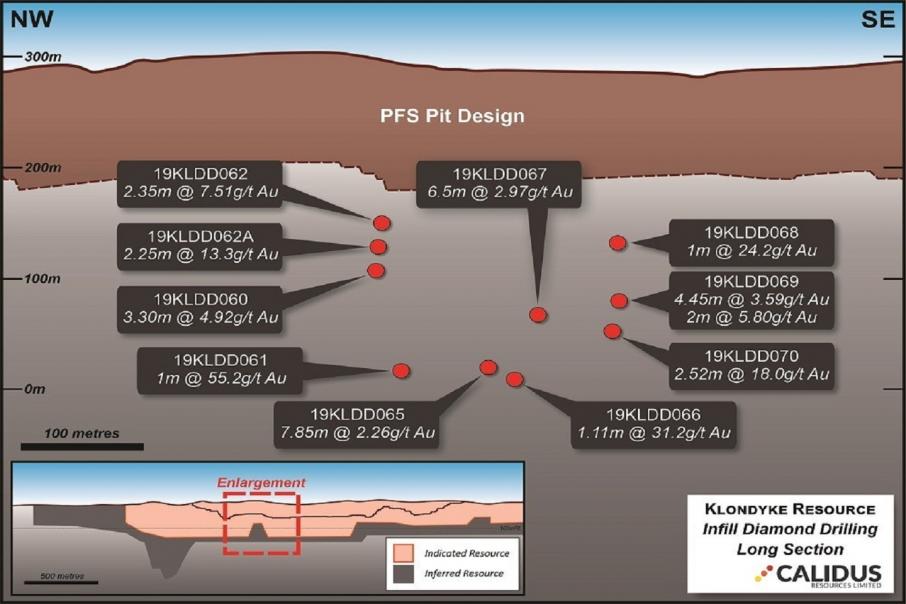 As Calidus Resources rolls on towards the end of a successful field season at its Warrawoona gold project in WA, the Perth based ASX-listed company has tabled a suite of exciting assays that may see its 1.25 million ounce resource boosted and its existing pre-feasibility study numbers updated.

Recent drilling up to 200 metres below the base of the proposed open-cut mine has provided an early indication that Calidus might also be able to head underground when the pit is mined out.

Latest numbers include 1 metre grading 55.2 grams per tonne gold and 1.11m at an ounce to the tonne gold.

The project’s Klondyke deposit in the East Pilbara of WA has been drilled from top to tail, defining gold mineralisation to a depth of about 280 metres and importantly, it is still open in all directions.

The drilling has now defined a number of high-grade shoots and once the company has evaluated the next phase of drilling targets, these shoots will likely attract significant exploration attention.

At Klondyke West, wide-spaced drilling up to 3.5 kilometres west of the current resource confirmed that the Klondyke shear is still mineralised with numbers like 4m grading 3.97g/t gold from 40 metres downhole, providing plenty of follow up work for the new year.

Calidus Managing Director Dave Reeves said: “We plan to fly a high-resolution aeromagnetic and radiometric survey in the New Year to assist with follow up targeting of this area [Klondyke West]”

“The metallurgical drilling targeted oxide and transitional zones for variability testing because we believe there may be upside in processing throughput in this material. This test work will commence in Q1 of CY2020 and provide a base for final feasibility designs as we advance our goal of becoming a 100kozpa Australian gold producer.”

“The PFS delivered in July 2019 demonstrates that Warrawoona will be a robust project producing ~100,000ozpa with a Life-of-Mine All-in Sustaining Cost of ~A$1,159/oz.”

The company recently defined a maiden ore reserve of 8.9 million tonnes grading 1.5g/t gold for a smidgen under 420,000 ounces of gold at the proposed Klondyke open pit and underground mining operation.

Just where this resource will end up is difficult to gauge and if Calidus can get an underground operation to fly, it may well have an uber long mine life project on its hands that should get into cash flow quickly given its close proximity to surface at the other extent of the known mineralisation.