Calidus Resources has stepped up its exploration program in the Pilbara, completing first pass drilling over the Otways copper prospect near Nullagine in WA. Reconnaissance drilling has confirmed the results of previous work, delineating wide intercepts of near-surface copper mineralisation including an impressive 40m at 0.70 per cent copper, hosting 10m at 1.64 per cent copper, from surface. 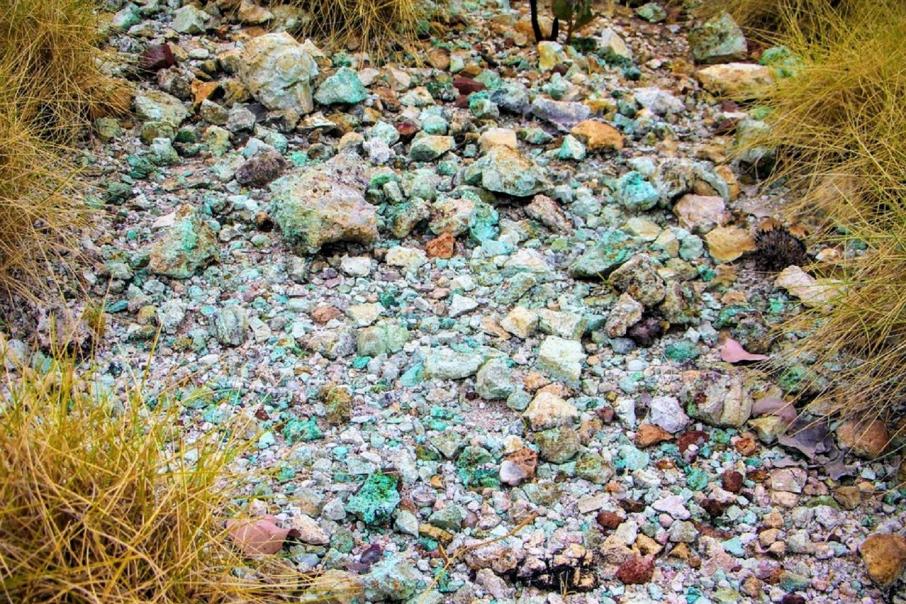 Calidus Resources has stepped up its exploration program in the Pilbara, completing first-pass drilling over the Otways copper-gold prospect near Nullagine in WA. Reconnaissance drilling has confirmed the results of previous work, delineating wide intercepts of near-surface copper mineralisation including an impressive 40m at 0.70 per cent copper, hosting 10m at 1.64 per cent copper, from surface.

The company has completed a total of five reverse circulation, or “RC” drill holes and one diamond drill hole at the main Otway prospect. It has also completed a further four RC drill holes at Malachite Flats, 1.5km to the south of Otways, testing an extensive surface copper and gold anomaly.

Calidus Resources Managing Director, David Reeves said: “The reconnaissance drilling at Otways has defined a thick blanket of copper mineralisation from surface which is increasing in grade to the south and west. This coincides with historical work which outlined a soil geochemical anomaly extending another 1.5km to the south-west”

“Next year we plan to step out drilling to the west and south to test whether this grade improves under the soil anomaly. We can then review results to ascertain how best to unlock value for Calidus shareholders from this deposit whilst we commence exploration on the largely untested broader Otways tenements.”

“This is in line with our twin strategy of developing the 1.5Moz Warrawoona Gold Project next year whilst continuing to explore a number of organic growth opportunities to generate value from our broader portfolio.”

The company’s Otways project is located around 45km north-east of Nullagine and 45km south-east of the company’s developing 1.5 million-ounce Warrawoona gold project in Western Australia’s East Pilbara region. Exploration through this budding goldfield forms a key part of the Calidus strategy in the region, which is aimed at identifying additional resources and prospect areas to best utilise the company’s developing infrastructure and processing facilities.

Calidus is earning a 70 per cent interest in the Otways tenure from junior explorer Rugby Mining. The project comprises two granted exploration licences that cover more than 140 square kilometres of this mineral-rich terrane and host an abundance of recognised copper and gold prospects. These targets currently are being evaluated by the company to assess its mineralisation potential. Targets include the Reedies and Copper Gorge prospects in the southern tenement area, through to the Otways and Malachite Flats targets in the north, which have been the first to feel the drill bit.

The copper mineralisation at the Otways was first identified in the 1960s, with soil sampling and shallow drilling defining an extensive surface copper anomaly and highly anomalous cupriferous mineralisation in drilling. Follow-up work in the late 1990s extended this anomaly along more than 1.5 km of strike with little exploration having been undertaken since that time.

Calidus’ recent drilling has confirmed a thick blanket of copper mineralisation at Otways, with RC and diamond drilling identifying partially oxidised sulphide ores in the near-surface environment which rapidly transitions to fresh pyrite-chalcopyrite mineralisation at depth.

Drill results from recent work include the above-mentioned 53m intercept with other notable assays including 18m at 0.33 per cent copper from only 18m depth and 53m at 0.17 per cent copper from surface. Initial interpretations of this drilling indicate that the copper mineralisation at Otways outcrops in the east and plunges to the west, appearing to thicken and strengthen in grade at depth. These observations seem to confirm the results of the sampling from the 1990s exploration program and perhaps point towards a larger and higher-grade copper-rich system at depth that awaits discovery.

Calidus’ success at Otways paves the way for an extended and systematic drilling program. With copper reaching for 5-year highs, perhaps the company has cherry-picked the right commodity to add to its increasingly successful portfolio of projects.

With the drill results from Malachite Flat still in the laboratory and Calidus now knee-deep in its development Warrawoona, the company now looks set to spread its wings and continue to unearth the potential of this mineral-rich region in northern WA.