Caldius Resources does not appear to be resting on its laurels after recently announcing a 1.25 million ounce gold resource in the Pilbara with the ASX junior this week kicking off a drill program to test new targets at its highly prospective Warrawoona project. The program will test three high-priority targets from soil geochemistry that showed the largely unexplored region is still rich with potential. 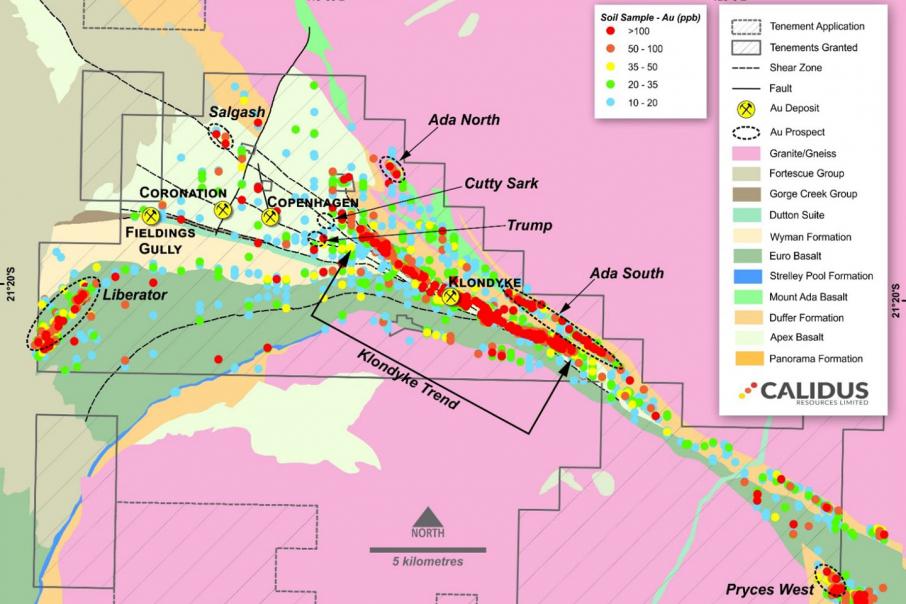 Emerging Pilbara gold developer Calidus Resources is taking exploration at its 1.25 million ounce Warrawoona gold project to the next level with the start of drilling at several new targets in the region.

To date, drilling has focused on the central Klondyke area, where Calidus quickly established a 1.25 million ounce resource and set up a base for a stand-alone development. A pre-feasibility study is due to be delivered in the September quarter.

The company is now rolling up its sleeves to find bolt-on resources in the wider project area, which is largely untouched by modern exploration despite a long history of high-grade gold occurrences.

A regional program of soil geochemistry identified a strong anomaly over a 3km strike length at Liberator, located 15km west of the Klondyke resource. Rock chip sampling produced some exceptional gold values at this prospect of up to 49 g/t.

The Trump and Cutty Sark targets are located on extensions of historic, high-grade gold workings. These are located within 10km of Klondyke and are near-surface, high-grade targets.

Calidus Managing Director, Dave Reeves, said numerous large targets had been identified in the wider Warrawoona region where little or no exploration had taken place.

He said: “The Warrawoona region remains essentially unexplored outside of the immediate Klondyke resource area and we believe that it is highly prospective for large mineralised orogenic gold systems.

“The multiple large gold anomalies are compelling and we look forward to seeing the results of our systematic and accelerated approach to exploration. With drilling now underway and the pre-feasibility study hitting its stride, we are entering a busy and exciting period for the company.”

Calidus is also about to get into the field with an induced polarisation survey across the central Klondyke area that could speed up exploration along the Klondyke shear zone.

The IP survey will look for anomalies associated with known mineralisation, which could then be used to improve drill locations along strike from the central resource area. The geochemical sampling program revealed a strong anomaly along 11km of strike at the Klondyke shear, which makes it another key target for building on the existing resource.

With a stellar track record of identifying successful drill targets, Calidus could very quickly turbo charge its resource/reserve base as it opens up a number of new drilling fronts.