Calidus Resources’ recent IP survey has identified a strong chargeability anomaly similar to and located immediately to the south of the 1.15 million ounce Klondyke deposit at its Warrawoona gold project in the eastern Pilbara, WA. The company said the new parallel shear highlights the potential for further growth at the project and will be drill tested in the second half of this year. 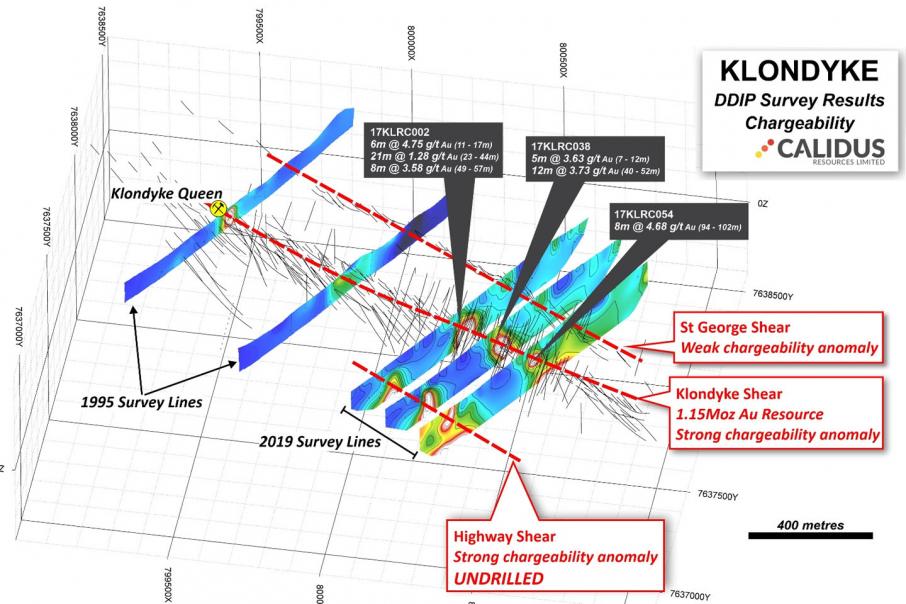 The survey highlighted a parallel shear 400m south of Klondyke and located at a depth of about 60m to 80m with similar chargeability signatures to Klondyke.

In addition, modelling indicates that mineralised structures at the Highway Shear anomaly are sub‐vertical and remain open at depth.

Management said the new gold target highlighted the potential for further growth at Warrawoona, which would further underpin the project’s production profile, mine life and economics.

Just under 64% of these resources sit in the confident indicated category status and importantly the higher-grade component of the resource holds 1.1 million ounces at a very respectable grade of 2.37g/t gold.

Earlier this month, the company flagged that it was on track to complete the PFS for Warrawoona in July this year.

Calidus has also recently completed a regional drilling program with results pending and has started a resource infill drilling campaign.

Additionally, the company plans to start drill testing of its newly defined geophysical targets in the second half of this year.

Managing Director Dave Reeves said: “The IP traverses show a clear correlation between gold mineralisation and IP anomalism and we are excited to further examine the strong Klondyke‐style chargeability anomaly identified over the Highway Shear which has never been drilled.”

“As the Highway Shear is located immediately adjacent to the planned 2km‐long open pit and underground being contemplated in the PFS, we will undertake drilling here in Q3 as a priority.”