Calidus Resources has achieved success in a major resource drill out at its Warrawoona gold project in the Pilbara. Results of up to 10m @ 3.84g/t gold from 27m down-hole at the Coronation prospect have confirmed a strike length of about 250 metres for the prospect. The company also reported it had extended the Klondyke mineralisation another 150m down-plunge with strategic deep diamond drilling. 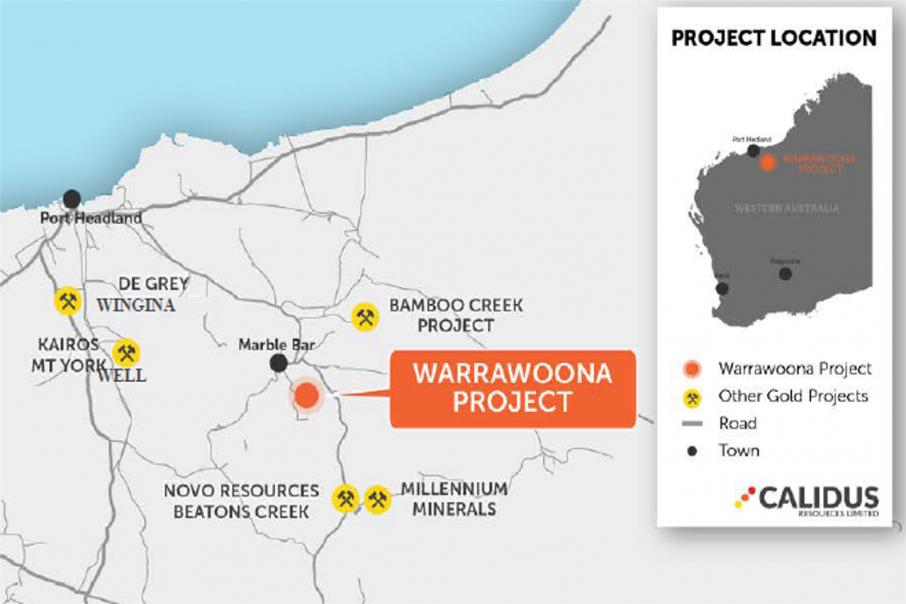 Calidus Resources has pulled off a quinella at its emerging Warrawoona gold project near Marble Bar in W.A, confirming high-grade results at the Coronation prospect and extending the flagship Klondyke deposit 150 metres down-dip via strategic deep diamond drilling.

At Coronation, the company has now defined a shear-hosted ore system across 250m of strike with significant new results up to 10 metres grading 3.84 grams per tonne from 27m down-hole, including 1m @ 30.4g/t gold from 27m.

An additional result of 8m @ 2.22g/t gold from 71m down-hole confirmed continuity of the mineralisation, first identified in a discovery hole of 10m @ 3.31g/t from 108m down-hole last year.

The Coronation prospect lies about 2.5km west of the high-grade Copenhagen prospect area which has a JORC-compliant mineral resource of just under 200,000 tonnes grading 6.12g/t gold for about 36,000 ounces.

Importantly, Coronation is located on the same splay fault as the Copenhagen resource and hence, is a high priority target for Calidus.

Rock chip sampling of the Coronation mineralisation has returned surface results up to 114.7g/t gold, attesting to the high-grade tenor of this deposit.

Further in-fill drilling at Coronation will be undertaken later this year, with the aim of adding shallow high-grade ounces in preparation for a maiden resource estimation at the property.

Calidus’ Managing Director Dave Reeves said: “Reconnaissance drilling at the satellite Coronation prospect has highlighted a 250m long high-grade zone that will be in-fill drilled in the coming year to provide a maiden resource adding to the 712,000 ounces inventory that already exists at Warrawoona.”

The result confirms an extension of the shear-hosted Klondyke mineralisation about 350m vertically below surface, which is a 150m extension down-dip from the deepest previous drilling completed.

Visible gold was identified in one of the holes at 480m down-hole, showing the coarse gold nature and simple metallurgy of the Klondyke shear-hosted mineralisation.

According to the company, the deep drilling will assist in defining additional high-grade ore lodes of the extensive Klondyke mineralised system, already modelled over 2.6km of strike and counting.

Mr Reeves added: “The intersection of high grade gold at Klondyke 150m below previous drilling is very exciting. Proving that the structure extends at depth, even on the far edges of the resource, gives us confidence that there is large blue-sky potential across Klondyke.”

Meanwhile, an extensive 30,000 metre RC and diamond drilling resource drill out program of Klondyke at shallower depths continues, with the aim of proving up more gold resources at the deposit.

The present mineral resource estimate for Klondyke is 9.9 million tonnes grading 2.06g/t gold for 654,000 ounces, with over 80% of the resource reporting to an “indicated” confidence level and potentially convertible to ore reserves.

The RC resource drill out phase is progressing well according to Calidus, with first assay results from the program due within 4 weeks.

Warrawoona appears to be the gift that just keeps on giving for Calidus. It is rare that the company fails to strike mineralisation when it puts down a drill hole – the only questions now are where will the 654,000 ounce resource finish up and how quickly will it get to the magical million ounce milestone.