Calidus Resources has intersected wide zones of high grade gold at its Copenhagen prospect, just west of the flagship Klondyke resource in the Pilbara. The best result was an impressive 10m intersection going 12.85g/t gold from 117m down-hole, including 4 metres at nearly an ounce to the tonne. The company has three drill rigs operating at its Warrawoona gold project, targeting ore extensions both down-dip and along strike. 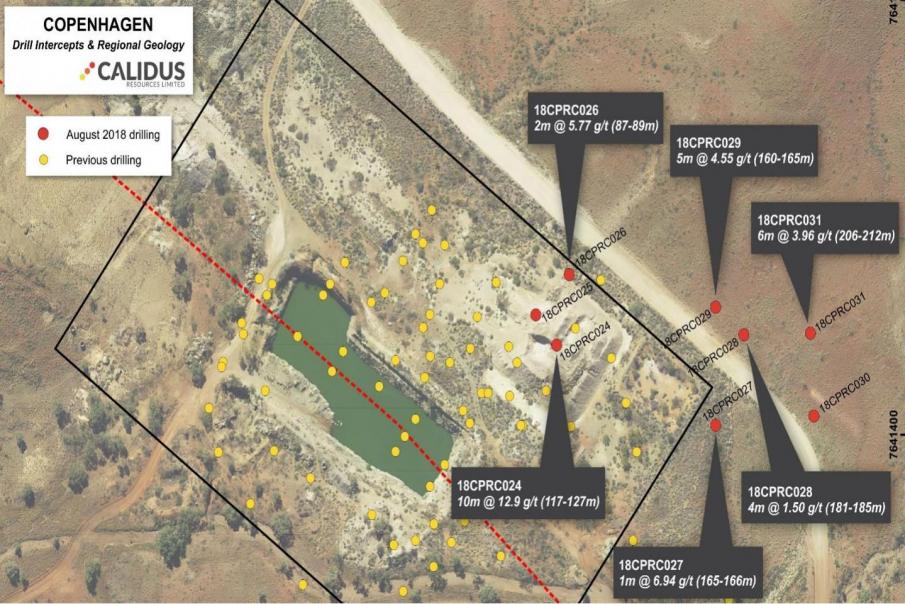 Calidus Resources has produced an impressive 10m drill intersection going 12.85 gram per tonne gold during an infill and extensional drill program at the emerging Copenhagen prospect, 10km west of the flagship Klondyke resource at the Warrawoona gold project near Marble Bar in WA.

The 10m intersection was drilled from 117m down-hole and included a 4 metre section going nearly an ounce to the tonne gold.

The new drilling results show that gold mineralisation extends down-dip by another 100m and importantly, it is still open at depth.

Drilling cross sections also indicate a distinct plunge in an easterly direction, which might represent a higher-grade ore lode for the Copenhagen prospect.

The deposit was historically open cut mined to shallow depths and has a remnant JORC compliant mineral resource of 36,000 ounces of gold grading a very respectable 6.12g/t.

Copenhagen potentially represents a high-grade, satellite open pit ore sweetener to the main Klondyke deposit, which has a much larger resource of 654,000 ounces of gold grading 2.06g/t gold.

The company has also recently completed resource drilling at the Coronation prospect nearby and all assays are still pending for that program.

Additionally, RC drilling is continuing at both the Klondyke East and St George Shear areas and deeper diamond drilling is underway beneath historical artisanal workings at the main Klondyke deposit in search of high-grade gold zones over more than 1km of strike.

At Klondyke East, Calidus is targeting easterly extensions of the defined mineralisation at Klondyke to build the mineral resource inventory further as it closes in on its initial goal of a million ounces at the project.

At the St George Shear, Calidus is testing a subparallel shear zone, 150m north of the major Klondyke shear zone, which returned results up to 8m @ 3.9g/t gold directly from surface last month.

Gold mineralisation on the St George Shear has been defined over at least 1km and also remains open down-dip.

Another hole completed some 90m west of Calidus’ own drilling at St George returned 6m @ 9.39g/t gold from 90m down-hole and possibly represents a further extension according to Calidus management.

At the main Klondyke deposit, the company is seeking to extend its high-grade intersections to further depths with a diamond drilling program, to build up further critical mass of grade and tonnage.

The comprehensive drilling programs will expand the resource inventory at the project and underpin a PFS for Calidus’ rapidly advancing Pilbara gold project, which is scheduled for release during 2019.

The company has also commenced base-line engineering geotechnical work, which is critical for determining suitable open pit designs and safe working wall angles and largely dictates the strip ratio for any proposed operation.

Calidus Managing Director Dave Reeves said: “Drilling at Klondyke is well underway with three rigs in operation. These drilling results from Copenhagen confirm the high-grade nature of the orebody with the mineralisation still open down plunge. With this phase of drilling complete, the Copenhagen resource will be updated as part of the planned resource upgrade for the wider Warrawoona Project.”

“Diamond drilling is also underway at Klondyke targeting an 800m long continuous structure lying at the base of the current pit design. Previous results indicate a high-grade structure centred in a chert marker unit.”