ASX-listed Calidus Resources has kicked off a round of confirmatory diamond drilling at its high-grade Blue Spec satellite underground gold deposit, which has the potential to increase annual production from its under-construction Warrawoona gold mine in WA’s East Pilbara region. The company says it will plug the diamond drilling results into a planned definitive feasibility study on Blue Spec, which lies about 75km from Warrawoona. 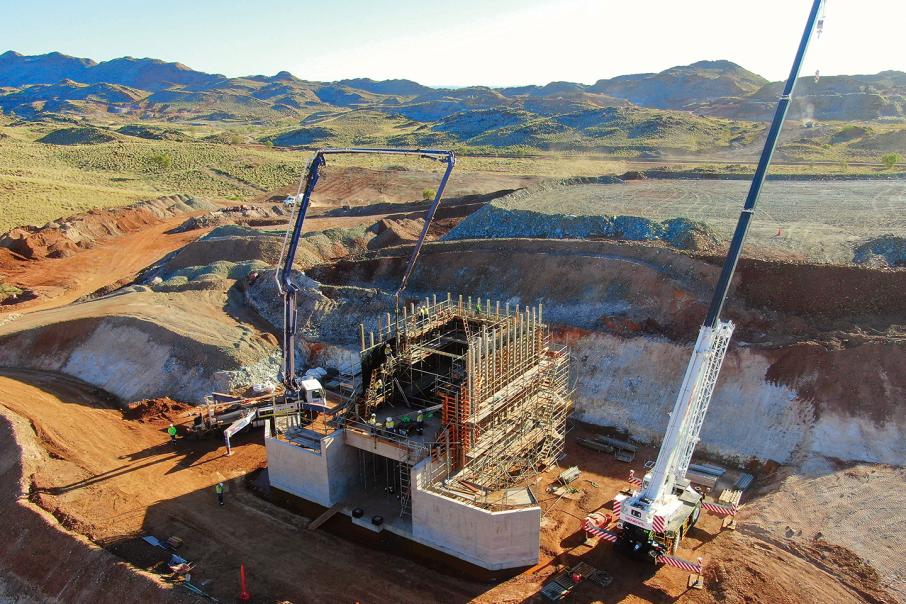 ASX-listed gold producer in waiting Calidus Resources has kicked off a round of confirmatory diamond drilling at its high-grade Blue Spec satellite underground gold deposit, which has the potential to significantly increase annual production and free cash flows from its under-construction Warrawoona gold mine in WA’s East Pilbara region.

The Perth-based company says the main objective of the program is to provide sufficient drill hole core to replicate the extensive metallurgical testwork carried out by previous owners and advance the metallurgical studies to definitive feasibility level.

Calidus will plug the diamond drilling results into a planned definitive feasibility study on Blue Spec, which lies about 75km from Warrawoona, which in turn sits about 25km south-east of Marble Bar.

A bonanza-grade inferred and indicated mineral resource estimate of 415,000 tonnes going at an eye-catching 16.35 grams per tonne for 219,000 ounces of contained gold has been attached to Blue Spec.

Calidus hopes to exploit the high-grade satellite deposit to boost gold production at Warrawoona to an annualised peak of much as 139,000 ounces per annum for part of the latter’s life of mine.

The new diamond drilling at Blue Spec for an aggregate coverage of about 2,500m will be vectored in on the known mineral resource to a maximum depth of 420m from surface.

Together with helping validate the company’s understanding of the metallurgy of the ore, the drill hole core from the current program will also be used to generate geotechnical data for the proposed underground mine development such as the decline and primary ventilation intakes.

Calidus, which plans to truck Blue Spec ore to Warrawoona, aims to release the Blue Spec DFS in the June quarter next year, in line with the anticipated first gold pour at Warrawoona, where development continues to progress on schedule and budget.

The company is looking to develop Blue Spec about six months after production start-up at Warrawoona.

Calidus Resources Managing Director, Dave Reeves said: “This new drilling program is an important step in our growth strategy. Blue Spec has the potential to underpin a significant increase in the production rate at Warrawoona while enabling us to leverage off infrastructure which will already be in place. This will in turn further strengthen the overall economics and financial returns.”

“Our strategy is to finalise the Blue Spec feasibility study so we can bring it into the production plan as soon as practical once operations at Warrawoona have been bedded down.”

According to an “integration” scoping study tabled by Calidus in March this year, Blue Spec’s injection lifts average annual gold production rates at Warrawoona from 90,000oz to roughly 120,000-130,000oz for part of the initial eight-year Warrawoona mine life.

Pre-tax cash flows from the new gold mining and processing operation swell about $126 million to an overall $662 million or $82.75 million a year courtesy of Blue Spec’s contribution.

Economic forecasts in the study were based on a gold price of $2,355 an ounce.

Warrawoona’s keystone Klondyke deposit hosts proved and probable open-cut and underground ore reserves of just under 14 million tonnes at an average grade of 1.2 g/t for 521,000 ounces of contained gold.

The proposed integration of Blue Spec with Warrawoona involves underground ore from Blue Spec being trucked to Warrawoona for treatment at its planned parallel sulphide processing circuit.

Pre-production capital costs for Warrawoona come in at $120 million, with additional CAPEX to bring Blue Spec on stream put at $28 million.