Having worked hard to adapt to the digital threats of an evolving media market, many publishers and broadcasters are now struggling with the impacts of COVID-19. 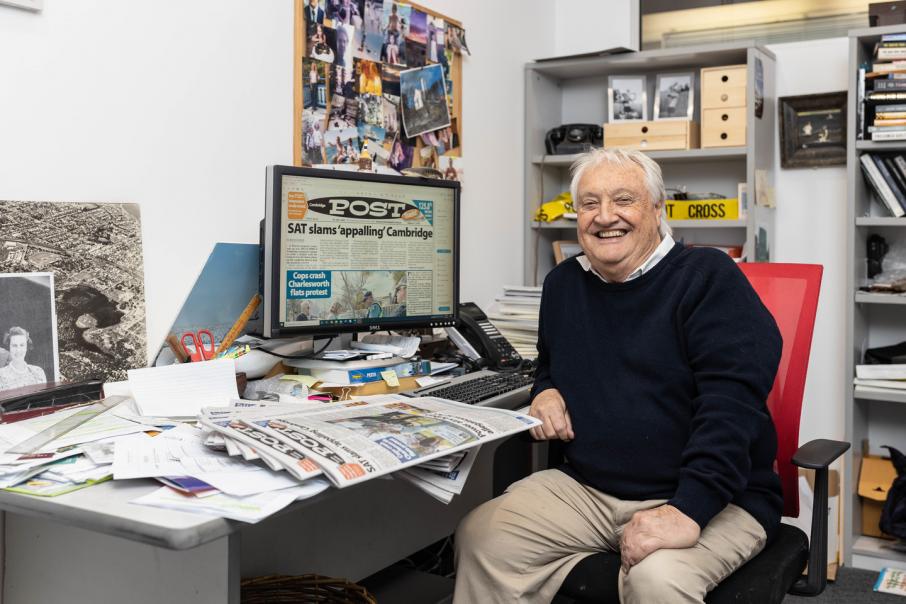 Traditional media has been in a fight for its life for more than two decades.

Classified newspaper advertising revenue, the rivers of gold that had bloated publishers’ wallets for decades, has all but disappeared from print, having started the migration online in the US in the mid to late 1990s.

Digital giants Google and Facebook soaked up advertising dollars, and media businesses were slow to react to the changing marketplace.

As circulation of print newspapers declined, publishers struggled to attract readers or advertisers to their newly created online offerings.

The impacts were felt in newsrooms in Western Australia, with the first large round of redundancies in 2009 putting 80 editorial staff at The West Australian out of work.

Since then, news organisations have been working hard to transition to the digital world, building websites and e-editions, implementing paywalls and finding new revenue streams to support their journalists.

However, not even the most flexible, online-friendly business model could prepare the industry for COVID-19, with media advertising spend down 38.7 per cent in the June quarter, according to Standard Media Index.

“There’s no way for a traditional media business to address this sort of fall in the short term, especially when it is so rapid,” The Brand Agency chief executive and chair Steve Harris told Business News.

“It’s your profit margin up in smoke and then some.

“We’ve seen this shown in the reported profits in the last few weeks.”

Kerry Stokes’ Seven West Media posted a loss of $162.1 million in the 2020 financial year, which it said was due to severe advertising market conditions.

Similar losses have translated to job cuts across the board.

Another organisation to act was Australian Community Media, which suspended the print editions of some of its regional WA newspapers, including the Avon Valley Advocate and Esperance Express, and stood down staff.

“For the commercial operators, some of this is directly related to COVID, but really COVID has just brought forward and forced upon them the changes they have been slower to make,” he said.

Paradoxically, the public turned to media organisations to stay informed as the COVID-19 outbreak grew across Australia.

According to its annual report, Channel 7 news increased its audience by 11 per cent.

Nielsen said the ABC News website had an audience of 15.7 million unique readers in March 2020, compared with 11.2 million in March 2019.

Curtin University head of journalism Kathryn Shine said while the pandemic was financially disastrous for media organisations, it reminded the public of the importance of accurate information.

“We need to have a change of mindset around news and how we value it,” Dr Shine told Business News.

“The news organisations are trying to adapt, but I also feel like there’s a bit of a community awareness campaign that needs to go on and that is: news costs money to produce, news is valuable to you and you need it.

“You understand that those things cost money, so why should news be free?”

For its part, Business News implemented a paywall in 2013, beyond which subscribers can access a range of news and data about business in WA.

It plans to triple its subscriber revenue over the next five years.

Dr Shine suggested the fall in advertising during the pandemic had accelerated the need for media companies to erect a paywall.

The West Australian editor-in-chief Anthony De Ceglie was tasked with implementing a paywall when he was appointed in 2019.

The paper established a paywall later that year, while Seven West Media’s regional papers became subscription based in February 2020.

According to the company’s annual report, it has 60,000 digital subscribers, but no revenue figures were provided.

Dr Shine said erecting a paywall was the right thing for The West Australian to do.

“Whether or not at this point it’s better for their bottom line, I don’t know, but I think it’s also a bit of a long game,” she said.

“You have to be prepared initially when you do a thing like that for there to be some pushback.”

In its 2020 financial results, Seven West Media said The West’s first 12 months of digital subscriptions were running ahead of plan, and structural change was under way at the paper.

While digital subscriptions grew, the paper’s circulation decreased 7.2 per cent and readership was flat.

The organisation enlisted former Fairfax chief executive Greg Hywood to conduct a review, which wrapped up last month, but no details have been made available.

Seven West Media has since published its annual report and flagged between $30 million and $50 million in cost-cutting measures this financial year.

There has been speculation Seven West could privatise or sell its newspaper division, although the company has always pushed back at these suggestions.

The company’s newspaper division also includes the Community News Group publications, which comprise six online community mastheads and 13 physical newspapers, the largest of which, Western Suburbs Weekly has circulation of 28,295, according to publication auditor CAB.

The group has suffered a number of cuts.

Post Newspapers are regarded as a local media success story in Perth, with a circulation of 51,051, according to CAB, and eight full-time journalists.

Mr Christian, who is both editor and owner, told Business News his papers relied solely on advertising to a unique western suburbs audience.

“If they have quality journalism and they are credible, they’ll survive and they will attract advertising as well.”

Advertisers want to be seen in a credible environment, he said.

Nine Entertainment, which owns Channel Nine, along with WAtoday and 6PR in WA after several mergers in recent years, has found success in selling premium ads and digital subscriptions across its platforms.

“You have two choices when it comes to financial delivery in a majority ad-funded model to generate revenue growth: you sell more of what you have for the same amount, or you take a premium position, package up what you have in a premium wrapper and get more for what you sell,” Mr Bingwa told Business News.

Nine’s publishing arm made 59 per cent of its total revenue from subscribers in 2020.

While Nine would not provide Business News with subscriber numbers for its WAtoday product, Nielsen figures reveal the site had 862,518 unique browsers, while its competitor, The West Australian, had 1.5 million.

According to Nine’s 2020 financial year results, $77.3 million was generated from digital subscribers and $54.7 million from print, which includes the titles it bought from Fairfax in 2018, The Sydney Morning Herald, Melbourne’s The Age, and The Australian Financial Review.

Former ABC News director Kim Jordan said while there was a cohort of people who liked to have their news aggregated [nightly TV news bulletins], companies were starting to realise it wasn’t a financial winner.

“I think Seven West Media are going to realise eventually it’s not worth going on with, I think Nine will do the same thing, they will probably centralise a bit more,” Mr Jordan told Business News.

“I think the ABC will probably plod along and do it for a while.

“But personally, I don’t think there will be TV news anywhere in about five years.”

“The future, my guess is, is going to be completely dig[ital]; there will be television, television news but it will be your choice, click-on-click-off streamed TV news,” he said.

Mr Jordan said radio was still a strong medium, in both its traditional and podcast formats.

The ACCC Digital Platforms Inquiry showed advertising spending on radio had been consistent for the past 25 years to 2018, but it too has taken a hit due to COVID-19.

In addition to about 100 positions the network axed before Christmas 2019, Southern Cross Austereo has this year stood down staff, reduced regional breakfast programming and replaced it with state-wide shows, and undertaken a $169 million capital raising to reduce debt.

Mr Jordan said while radio was popular, a majority of people didn’t listen to the radio to keep up to date with the news anymore.

This is congruent with the ABC’s decision in June to stop its flagship 7:45am radio news bulletin to instead focus on on-demand and digital services. 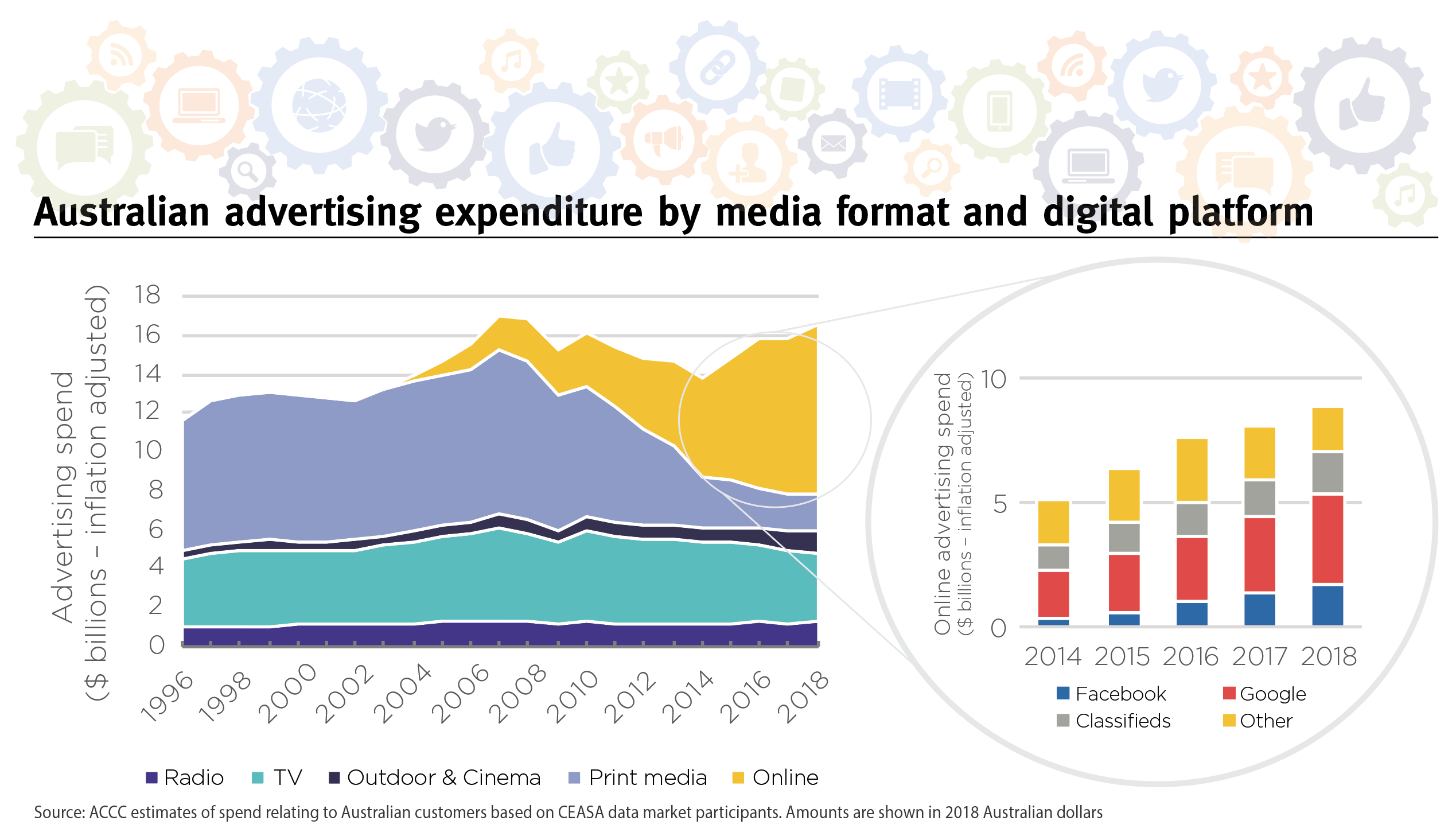 Media organisations around the world have been finding new ways to support their content.

The Guardian, which operates in the UK, US and Australia, offers content for free but asks for donations from readers.

This strategy has paid off, and for the first time in two decades, Guardian Media Group posted an operating profit of £800,000 in 2019, compared with a £57 million loss three years earlier.

The New York Times has managed to evolve from serving Manhattan to reaching audiences around the world.

The newspaper employs 1,700 journalists, a record, and has 5 million print and digital subscribers from all around the world.

Other companies are investing in new ways of appealing to their audience.

UK-based Tortoise Media is an ad-free, member-based website, established in 2019 after a successful Kickstarter campaign, that offers ‘ThinkIns’ for members and journalists to discuss topics.

In Australia, philanthropy and government support have been offered to smaller regional papers during the pandemic.

The Guardian reported Broken Hill’s Barrier Daily Truth was able to publish a paper again after standing down staff due to the COVID-19 shutdown, when a mining executive helped secure extra advertising.

Meanwhile, AAP was also rescued by a consortium of investors and philanthropists, led by former News Corp chief executive Peter Tonagh, saving it from a proposed June shuttering.

AAP recently launched a crowdfunding campaign to raise money to support its services, which raised about $113,000 of its $500,000 goal in its first week.

Curtin University’s Dr Shine said philanthropy-supported journalism was a possibility, but in Australia, media organisations were usually seen as businesses.

“The whole idea about donating money to support news is quite an unfamiliar concept in Australia, so you need to have people who have a different mindset,” she said.

“A few years ago, you would have never seen the government providing grants to news organisations, but that is already happening here in Australia so it’s hard to predict where things will end up,” Dr Shine said.

It is also unclear the extent to which news organisations will benefit from the new rules to make Google and Facebook pay for content.

The online media environment removes barriers to entry and new players are establishing themselves to fill gaps in the market, but it isn’t easy.

New publications have been established in some areas where Australian Community Media suspended its papers, the new independent titles including The Collie River Valley Bulletin and The Bridgetown Star.

Lifestyle website Perth Is OK, which operates popular social media accounts under the same name, originally started out as an Instagram hashtag.

Founders Luke Whelan and Blake Kelleway used the community they had built to launch a website about 18 months ago, and now have ambitious goals to become a digital news player.

The website has a handful of full-time staff, around 10 regular contributors and a number of less-frequent contributors, all of whom are paid.

He said the business provided content creation and an influencer network to its clients, and had worked with businesses including Bankwest and RAC.

“Every different revenue model we can find we will utilise to get out the best editorial content possible,” he said.