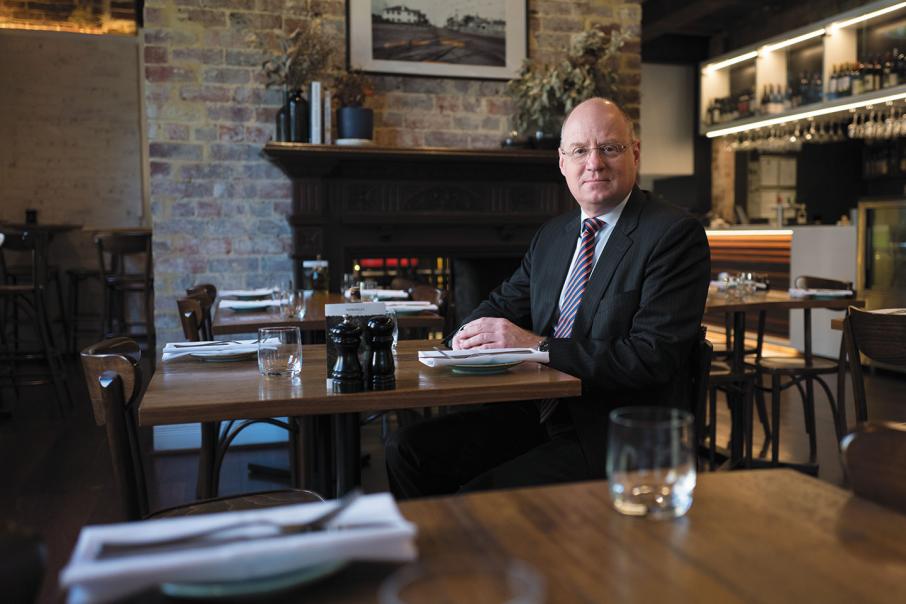 Rowan Munchenberg moved to Perth in late January, having previously led an internet service provider interstate, worked as an electrical engineer, and undertaken various roles over 17 years with the Commonwealth Bank of Australia. Photo: Attila Csaszar

As the major banks invest heavily in technology to meet the service needs of their customers, perhaps it should be no surprise the new managing director at Bankwest brings a strong tech background with him to the role.

Rowan Munchenberg moved to Perth in late January, having previously led an internet service provider interstate, worked as an electrical engineer, and undertaken various roles over 17 years with the Commonwealth Bank of Australia.

Originally from the Barossa Valley, north-east of Adelaide, he is a fifth generation descendant of German immigrants. His father ran a butcher shop in the local town.

“It was a wonderful place to grow up,” Mr Munchenberg told Business News.

“We’d have fillet steak for breakfast, or lamb’s fry or something. But my father wanted another career path for me, so I was not overly involved in the shop.”

A bright student, the young Munchenberg loved maths and physics, and earned marks that put him in the top 1 per cent of the state all the way through school and university.

He studied electrical engineering at Adelaide University and, after graduating, moved to Sydney, where he built an early career in software engineering (before the internet).

He took a job at OTC (Overseas Telecommunications Commission), which later merged with Telecom Australia to create Telstra.

His seniors must have seen management potential, because during his eight years with OTC he was sponsored to do an MBA at the Australian Graduate School of Management at the University of NSW.

He then worked on the Foxtel deal, which was being put together by Telstra, and would become involved in the rollout of its cable TV services.

“The internet was coming on stream. I was using it a lot, and became fascinated by its possibilities,” Mr Munchenberg said.

“I worked with what became Ninemsn and On Australia (which would become Telstra Bigpond).”

Mr Munchenberg then took on a leadership role at Bigpond, and customers grew from 40,000 to more than 1 million during this period, making it the number one internet service provider in the country.

“We were allowed to do our own thing, and there was a view that this (the internet) was going to be the future,” Mr Munchenberg said.

In following years, he worked with Telstra spin-out Commander Communications, which bought eight companies to add to its IT services business.

There was a lot of travel for work, although the desire (and need) to settle down with his young family was growing.

The opportunity to do so arose in 2001, when CBA approached Mr Munchenberg in its search for an engineer with business experience to help transform a products division.

He then worked in foreign exchange and business banking, and on forest management schemes, as well as various secondments to run acquisitions.

In a throw forward to his current role, Mr Munchenberg also worked on CBA’s acquisition of Bankwest in 2008, and got to know the team, the bank and its culture during this time.

His final move prior to joining Bankwest was to South Africa in 2015, where he led a banking startup called Tyme (Take Your Money Everywhere).

“My job was to turn it from a startup into a totally mobile bank,” Mr Munchenberg said.

As he explains, an important part of this concept was to make sure the identification process was accurate.

“If you’re going to open a bank account, a bank needs to ensure you are who you say you are,” Mr Munchenberg said.

“You have to avoid money laundering and terrorism finance. So the innovative piece of work we did in South Africa was to build a kiosk, KYC (know your customer) identity checking.”

In this system, which will launch in South Africa soon, a potential new customer will walk up to the kiosk, put in their identity book (a type of everyday passport), answer a few questions, give a fingerprint and walk away with a new account.

“In the background, a lot of clever technology is checking various databases,” Mr Munchenberg said.

“The bank will be able to issue you an account on the spot. Personalised, within minutes.”

Looking back over his 30-year career to date, the former electrical engineer turned banker has the following advice for those seeking to build a corporate career.

“Leverage the skills and capabilities you have, and try something different. It might not always work, but you’ll learn so much.”

As a new arrival to Western Australia, Mr Munchenberg believes the economic situation is far better than he had been led to believe from reports coming out of the state.

“When I was in South Africa I heard a lot of doom and gloom post-mining boom,” he said.

“I arrived here and yes, there are a few empty shops, but generally people are getting on with things.

“We’re not seeing massive economic stress in our small business portfolios. There’s a little bit of home lending stress in WA, in mining towns and outer-metro areas, but nothing near like you’d think when you read the headlines.”

When it comes to digital disruption, Mr Munchenberg sees opportunities as well as threats.

“There are people grasping opportunities when it comes to digital disruption, and getting on and doing things,” he said.

“It’s not just the internet, it’s about smart technology, from startups through to mining.”

At the same time, technology is changing banking.

“We’re continuing to invest a lot in what we do,” he said. “The way people use money is changing. There’s been a dramatic lift in tap and pay. There is no tap and pay in South Africa (yet). That de-cashing is a big step.”

As for his own leadership style, Mr Munchenberg describes himself as open and transparent.

“I’m very approachable. I don’t have an office, and most of the time you will see me sitting on a stool at a table in the middle of the office,” he said.

To get away from it all, Mr Munchenberg takes to the great outdoors.

“I used to abseil and go canyoning when I lived in Sydney, and also Johannesburg,” he said. “Here, I have tended to go bushwalking, but I am considering sailing as an option.”

Mr Munchenberg describes diversity in decision-making as a critical component of any business environment.

“We take a deliberate approach to setting targets for gender equality across our organisation,” he said.

In South Africa, a quota system ensured there was a mix of all races.

“The way I approached it was that we needed to have an organisation that was representative of the community we worked in,” Mr Munchenberg said. “So let’s hire the right people, and let the targets work themselves out.”

He also believes banks have to keep on top of technological developments.

“Technology offers many things, but with banking you need trust in order to deposit your money or make payments,” he said. “Whatever happens, it is smart for the banks to invest heavily in this area, rather than wait for someone else to disrupt them.

“For example, we are about to pilot the use of wearable technology for payments, a bracelet or watch, which embeds the technology of a card.

“It’s even more convenient than a phone, plus it provides amazing insights into the needs and preferences of our customers.

“We like to trial a few ideas to see if it helps better meet customer needs and if there is take-up. If it works, we can do more, and if not, we might pull back.

• This will be Charlie Gunningham’s final ‘CEO Lunch’, as he has handed over the CEO role at Business News to Mark Pownall.