Business News sat down to lunch at Julio’s with Michael Chaney to discuss his career at Wesfarmers and beyond. 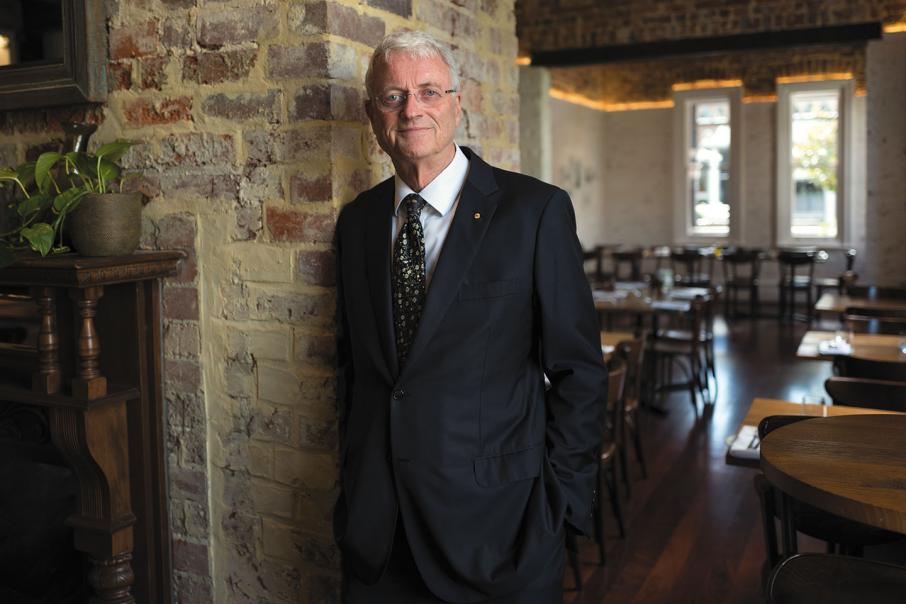 Michael Chaney cites a supportive family environment as being a strong contributing factor towards his successful career. Photo: Attila Csaszar

The Wesfarmers conglomerate outdid all other businesses on the ASX during Michael Chaney’s tenure as chief executive from 1992-2005, a performance driven largely by its founding cooperative structure, succession planning and relentless focus on shareholder returns.

In the years since, Mr Chaney has chaired the company as well as led the boards of National Australia Bank and Woodside Petroleum.

Currently chancellor of the University of Western Australia, Mr Chaney cites a supportive family environment as being a strong contributing factor towards his successful career.

“I was very fortunate to be born into a large family here in Perth, being the fifth of seven children,” Mr Chaney told Business News.

“My mother was a homemaker and dad (Sir Fred) was in federal parliament from when I was five up to 19.”

The passage of time has led to an appreciation of the challenges his parents faced in raising such a large family, all the while remaining positive. Mr Chaney doesn’t remember his parents ever uttering a negative word.

“The best illustration of this was when I failed every unit at the end of my second year of my geology degree at UWA,” he said.

Mr Chaney said he had earned good school grades at Aquinas College and found the first year of university easy, so had coasted through year two. But the plan had gone off the rails, to a degree.

“To find out your results, you had to see if your name was on the list pinned up at the Undercroft, and of course mine was missing from all of them. I rang dad from the phone box, and his reply was ‘those useless university lecturers, they wouldn’t have a clue’.”

It was reverse psychology, and it worked. Mr Chaney’s reaction was to redouble his efforts.

That renewed enthusiasm for learning paid off years later when, back at UWA to do an MBA, he topped the business school.

After university, Mr Chaney took a job as a geologist exploring the north-west of WA. He then spent a couple of years in Houston, before returning to Australia during the 1970s oil crisis.

Mr Chaney was now married with one child and another on the way. After his MBA, he was offered a job at Exxon in Sydney, but took a role with the Australian Industry Development Corporation (AIDC) in Canberra. Michael Chaney the geologist was now to gain experience as an investment banker.

“I joined them mainly because Canberra properties were more affordable than Sydney,” Mr Chaney said.

“But this turned out to be the most fabulous training ground. The AIDC was highly professional, they focused on the detail as well as big picture.”

In 1981, aged 31, Mr Chaney was offered the chance to open up the Perth office as the AIDC’s manager in WA. Two years into the role he took a call regarding a company secretary position at Wesfarmers, and remembers having an interesting interview with then CEO, John Bennison, who passed away recently.

“During my hour’s chat he never once talked about the job, he only talked about fishing and France,” Mr Chaney said.

“After a while I thought maybe this was some kind of test, and that I should take the initiative, so I asked about the job. He replied, ‘well, I think you should pull it on’. That turned out to be the offer and acceptance.”

It was a crucial time for the cooperative, which had taken the decision to restructure and go public. As Mr Chaney explains, it was the best option.

“A true co-op usually does all its business with its shareholders, and they do virtually all their business with you,” he said Mr Chaney.

“But Wesfarmers had become more and more diversified and had different businesses that had nothing to do with its members.”

Within a year of joining as company secretary, Mr Chaney was made chief financial officer, before rising to CEO.

“Wesfarmers has gone from being valued at $28 million to a current valuation of $48 billion,” he said.

“There have only been seven CEOs in 100 years. We have a diverse group of businesses within Wesfarmers, so people have opportunities to shine.”

The internal appointment of all its CEOs has set Wesfarmers apart from many other organisations of similar size. The internal structure establishes many businesses, each with its own board and executive team. This provides a natural breeding ground for future CEOs and board chairs.

“Rob Scott has been in charge of the industrials division, and will soon become the CEO of Wesfarmers,” Mr Chaney said.

“Current CEO Richard Goyder is also chair of the various businesses within the group, including Coles, so is well suited to take on chairmanship roles, as I did.”

Many people have studied the factors behind the success of Wesfarmers over the past few decades.

“I was a great admirer of Andre Morkel (at UWA), so we invited him in to conduct a company strategy session,” Mr Chaney said.

“We described our approach to him, how we’d put a toe in the water, and if it worked, we’d go further. If not, we would pull back.”

Professor Morkel told the executive team this sounded like ‘logical incrementalism’, which was from James Brian Quinn’s work, from Dartmouth College in the US. Logical incrementalism became a way of explaining how Wesfarmers looked at every business opportunity.

Another key ingredient of the Wesfarmers culture is its ruthless focus on shareholder returns. Having been born out of a cooperative structure, the fruits of the organisation were always to be returned to the owners.

“I was sitting at a board meeting the other day and expressed a view that a focus on return on equity (ROE) would be good,” Mr Chaney said.

“A view was then expressed that ‘if you do that, we would just shrink ourselves to greatness’, to which I replied ‘I know a company that, over a 20-year period, had ROE as its sole focus and it outgrew every other company on the stock exchange’.”

When Mr Chaney stepped down as CEO of Wesfarmers in 2005, and having already been on the board of BHP, it was a natural step to move into professional directorship roles. He has also chaired a school board for 10 years, and has been chancellor of UWA for 11. Chairing Nab through the GFC was particularly tricky.

“I was actually canoeing down the Rio Grande when (the GFC) happened,” Mr Chaney said.

“I climbed up the Grand Canyon, and then had to fly back to Melbourne to monitor things. It mainly meant keeping calm. We had some strong banks, but we also had some European exposure and needed government guarantees in order to assure our international funding.”

When asked about building a corporate career, Mr Chaney has two main pieces of advice.

“Do something that you like, always try and do a little bit better in every task than your boss expects,” he said.

“If you are diligent and work hard at what you are doing, you will find you get promoted faster than you expect.”

As for the local economy, Mr Chaney acknowledges various businesses are finding it challenging at the moment.

“The WA environment is tough,” he said.

“Restaurants are attracting fewer people, and when they are coming they are buying less expensive food and wine.

“Car yards are doing 35 per cent less business than a few years ago. A fish wholesaler told me the other day they are sending trucks out with only $100 of food on board instead of $500.”

“Our WA state product, less exports, suggests we’ve been in recession in WA for a few years. Everyone seems to think we’re at the bottom. Hopefully that’s right. The big question is China. If China stumbles, we’ll have a deep recession.”

Another topic often discussed around the boardroom is digital disruption and cyber security.

“Everyone is being disrupted to some degree,” Mr Chaney said. “Amazon will enter our market and take a share of it.”

Mr Chaney likes to keep up to date by reading the papers every day, and tries to listen to or watch the news.

“When you get big thick board papers to read, you feel all read out,” he said.

“But I am making more of an effort. A recent book I read was The Silk Roads, by Peter Frankopan. A fascinating book, it points out that our eurocentric view of history is skewed and that the region from the Middle East to China has always been at the centre of things, which has echoes in the current times.”