Nova 937 chief Gary Roberts has been in radio all his life, with his many industry achievements including launching two successful radio stations in Perth – 22 years apart. 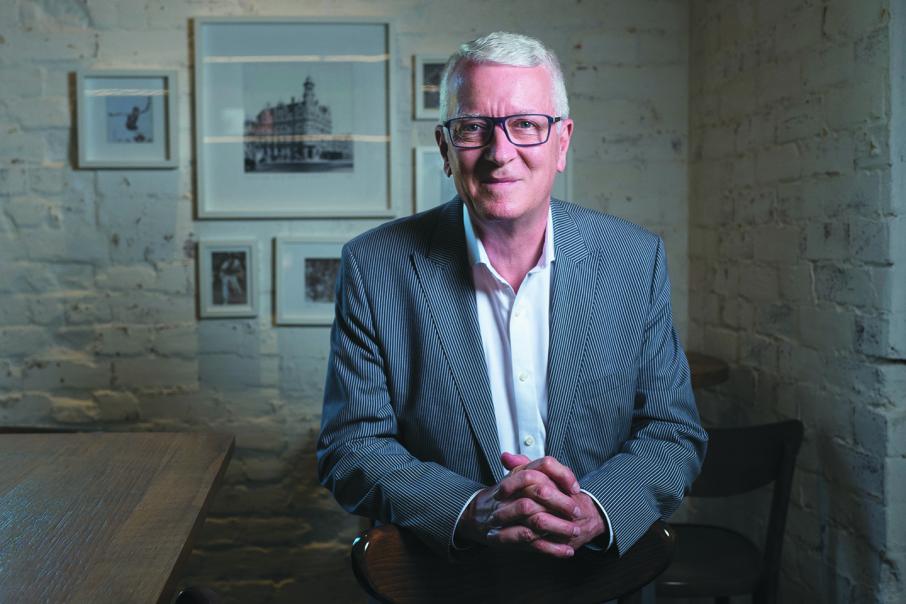 Anyone who has heard Nova 937 managing director Gary Roberts speak will know instantly that his voice is made for broadcasting.

While the Christmas crowd at Julio’s restaurant renders my recording ineligible for a podcast, I can hear his deep and mellow tones sufficiently clearly to follow our recorded conversation.

Mr Roberts started early in the radio business in his home town of Melbourne, initially as a technician. Within no time he scored an on-air role at just 17, an age normally considered premature by some considerable margin.

“As a bit of a joke, another guy who was also a panel operator and I stayed back one night,” he said.

“We put together a tape, which we sent off for a job that was being advertised at (industry magazine) B&T.

“I got a telegram back saying, ‘Congratulations, you’ve got the job’. It was like, hang on a second, I’m 17 years old and they’re offering me an on-air job, these people are idiots.

“So I moved to 2BE (south coastal NSW) and before long I was doing the breakfast show.

“What they were doing with a 17 year old doing breakfast on country radio was beyond me, but I got away with it.”

While Mr Roberts admits his youth and inexperience led to some big mistakes, his track record shows these errors were more than outweighed by his success as he ascended the career ladder in his chosen field.

Station hopping to better positions was his way to rise most rapidly in radio. He soon moved from 2BE to Alice Springs and then to Wollongong, Adelaide and, by the time he was 20, Sydney.

It was in the next couple of years that two life-changing events occurred, things that became core to his life since then – he met his wife, Wendy, and they moved to Perth.

It is perhaps fair to say that, of the two, Mr Roberts’ feelings for Perth were clearly a little slower to emerge as ‘love’, as he left the city after being driven away from radio station 6KY by its programming shift to ‘beautiful music’, and was then sacked from 6IX.

He headed to Newcastle in NSW, where he had been offered his first programming job, and then went to Brisbane and Auckland. Here he helped turn around a poorly performing station for Derek Lowe, a radio entrepreneur who had earlier co-founded Radio Hauraki, the pirate station that broke New Zealand’s state monopoly and was eventually granted a commercial licence.

The move to NZ was successful and Mr Roberts was just starting to settle in when an opportunity too great to knock back beckoned.

“I’d figured I was going to stay in Auckland for quite some period of time, because it was fabulous,” Mr Roberts said.

“Great radio station, great people. I was in the process of buying a house and out of nowhere I get a phone call from George Chapman, who, last time I’d seen him, was running Channel 9 in Sydney, but now he was coming back to Perth to launch FM.

“We missed Perth from the time we left, and all we wanted to do was come back,” he said.

Mr Roberts was asked to program 96FM, Western Australia’s first FM station, and was part of a simultaneous rollout of new spectrum licences around the country. FM offered higher quality sound so it was better suited to music than the traditional AM band.

Anyone who lived in Perth at the time will be familiar with 96FM, which ruled the airwaves for a decade; its recognisable logo was proudly displayed by teens and younger Western Australians on T-shirts, car windows and school books as the station became a promotional juggernaut.

“No-one gets to launch a new radio station and on a new band, so it was just a fabulous time,” Mr Roberts said.

“We got to build something that, you know from your own history, we were market dominant in a very short period of time.

“We were the fastest growing FM station in the country.”

He said the programming that led to 96FM’s success was, in part, due to his experience in NZ, which had resulted in numerous trips to the US, where radio stations were more focused on playing music from albums rather than just top 40 singles.

Bringing this album-oriented rock approach to conservative Perth was not without its knockers, but the style proved a hit from the outset and made the station’s owners – chiefly Jack Bendat, Brian Treasure and Kerry Stokes – significant profits.

“When the shares were sold, I paid off my mortgage. I never had a mortgage again in my life, and that was because of the success of 96,” Mr Roberts said.

By the time 96FM was sold to the group behind the Triple M formula, Mr Roberts was general manager. He stayed on for several years but was eventually worn down by the demands from an east coast head office to do things he disagreed with.

Twelve years after the founding of 96FM, he quit.

“And out of nowhere Jack Bendat called me and wanted me to solve the problem they had with (FM station) 94.5,” Mr Roberts said.

“He’d bought it at a good price, except it was going nowhere.

After turning that station around, Mr Bendat took advantage of relaxed media ownership laws to buy a second station in the Perth market, PMFM (now Hit 92.9), from Kerry Packer.

Mr Roberts was also on the board of the Federation of Australian Radio Broadcasters (now Commercial Radio Australia) and ended up being chairman, the first from WA.

In 1996, Village Roadshow subsidiary Austereo sought to purchase both radio stations. Reluctant to sell, Mr Bendat put a price of $100 million on the assets. It kept Austereo at bay, but only for a year and, by 1997, Mr Roberts found himself working for an east coast business again. He lasted five years, a period that he admits was interspersed with numerous resignation attempts.

As it happens, he left the group around the time a new licence was made available. The group behind the Nova stations in the east sought him out while on holidays in Italy to have him establish their Perth operation.

“Very few people get the opportunity to launch new stations, and I got lucky, seriously got lucky,” Mr Roberts said.

“To actually be able to launch from the ground and build everything, bring a team together, build a new brand.”

Nova 937 launched with the US band Red Hot Chili Peppers live on air, the first time Mr Roberts recalls doing such a thing. He laughs that the station had only been broadcasting for 13 minutes before the rock stars uttered their first serious expletive (something normally frowned upon in commercial radio).

The station has been another success story for Mr Roberts, and with 15 years at the helm, the longest of his notable career in local radio management.

He has also committed time outside the station, having had five years as a trustee of the education-focused charitable organisation Fogarty Foundation and helping found its associated group, CoderDojo WA, which encourages children to learn software programming. He has also been on the board of Australia Day Council of WA.