Business News sat down to lunch at Julio’s with mining director Bronwyn Barnes. 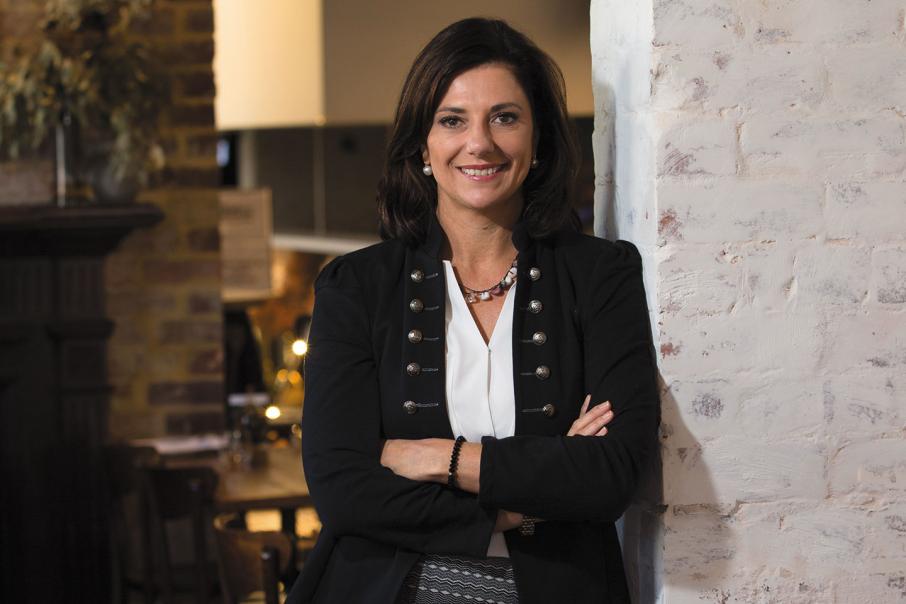 This may be Business News’s final CEO Lunch for the 2016-17 financial year but it also marks a first, with Julio’s a fitting location to discuss Bronwyn Barnes’ career path, considering she spent time on the payroll there many years ago.

Ms Barnes worked as a waitress at the iconic West Perth restaurant after a period up north with her young family, during which time she did odd jobs to make ends meet.

“During those years I also sold makeup door to door, and rented out spare rooms to mining workers in Karratha and then Geraldton.”

Born and raised in Innaloo, Ms Barnes attended the local primary school and later, St Mary’s Anglican Girls’ School in Karrinyup. Her father was a property developer and her mother a schoolteacher. Despite having an educator in the house, the young Ms Barnes found school difficult.

“I showed entrepreneurial potential, but was not very conventional,” she said.

“Some days I’d be in tears, and my mum would say: ‘You know, it’s just going to take you a while to blossom’.”

After year 12, she did an exchange year in Belgium. Having enrolled before her gap year to study for a bachelor of business degree at Curtin University, Ms Barnes had a change of heart on her return and instead wanted to go to the University of Western Australia to study Medieval history and French.

Ms Barnes remembers being on holiday at Rottnest Island when she announced to her parents she wanted to change her degree. Her father immediately bundled the family back on the ferry and put her in a taxi so she could change the enrolment.

It was around this time she met her future husband, and in her final year at university they were married, had bought a house and produced a baby. She was 21.

Interest rates went to 18 per cent, and so the young family headed to the state’s north-west to shore up their financial situation.

After a few tough years they managed to keep their heads above water and emerge from the experience with family and assets intact.

Back in Perth, Ms Barnes enrolled in a graduate diploma of business course, and took a job in an ASX-listed company owned by Renault, which needed a French-speaking executive assistant. This opportunity marked Ms Barnes’ first foray into the ASX-listed company space.

Within a few years she was working with Andrew Forrest at Anaconda Nickel two days a week. She became involved in federal government lobbying for the mine, and then became its full-time head of corporate affairs.

More corporate affairs and communications jobs followed, first at Phillips Petroleum and then with methanol producer and supplier Methanex. After the Canadian owner canned the Methanex project (citing instability of the Australian political situation in preference for a project in Egypt), Ms Barnes moved to Western Mining, which was about to be taken over by BHP.

After the $8 billion takeover – the largest such deal on the ASX up to that point – she moved into the integration team and senior executive roles.

“The cost of the takeover was repaid from the profits of nickel division alone with three years,” Ms Barnes told Business News.

“So BHP effectively got the Olympic Dam for free, and everything else.”

It was around this time that her husband suffered a major stroke, at the age of 39. He needed nursing, and this proved an exhausting time. After a while, an opportunity to take redundancy came up, and Ms Barnes took it.

She needed a break, and went to Paris to enrol at the Alliance Francaise, to refresh her language skills and rest and recuperate. She then took a winemaking course at L’Ecole du Vin in Bordeaux.

“I do love tasting and exploring alcohol,” Ms Barnes said.

Back in Perth, Ms Barnes headed up ASX-listed junior Graynic Metals, which had an assortment of projects in various locations and needed a clear direction. After this, she formed her own advisory company, Integra Management Consultants, which mainly advised junior explorers on how to progress to the construction phase.

In the seven years until 2017, Ms Barnes has been active on seven not-for-profit, educational and indigenous community boards.

This is in addition to a series of professional directorships, which include her role as chair of Windward Resources, Auris Minerals and Indiana Resources, and non-executive director of Chinese workforce outsourcing company JC International Group.

“My experience is predominantly in mining, but I like to have a foot somewhere else, which reflects my interest in other things.” Ms Barnes said.

It’s all a long way from the uni student studying Medieval history and French, and shows there is more than one way to achieve a successful corporate career.

“The advice I’d give is around the need for patience, something I do not have,” Ms Barnes said.

“I used to beat myself up that I was not smart enough, not being promoted quickly enough, and now I look at where I am and think ‘I got there in the end’.”

As for the local economy, at least in junior mining, Ms Barnes believes things have been looking up.

“We’ve had nine or 10 months that have been really good for mining and the junior industry,” she said.

“Capital markets have opened up, and there’s been renewed interest in drilling holes and discovery.”

This is stark contrast to the prior three years, which were incredibly difficult.

“Mining needs three things – good teams, a good asset and a good funding plan. If you don’t have all three, don’t bother.”

The long-term outlook was dominated by China, Ms Barnes said, with her board role on JC International providing insights into the massive contracts being developed around the One Belt, One Road strategy – the $US22 trillion-dollar commitment to redevelop the old Silk Road and sea route.

The implications for Western Australia’s resources industry are immense, if not fully understood, Ms Barnes argues. What this also means is WA has to get serious about developing other industries such a tourism, education, health and technology.

“We should be exporting our skills and expertise and discipline of our mining operations,” she said.

“The WA School of Mines (based in Kalgoorlie) should be a global centre of expertise and technology.”

Ms Barnes describes her own leadership style as genuinely energetic and direct.

“I believe I am good at articulating visions to a group,” she said. “A well thought-out plan, well communicated, should get people to sign up. I’m clear, I don’t have time to faff around.”

Diversity in decision-making is also important.

“I’m not an accountant, geologist or engineer, but I can walk into a mining company and see what’s gone wrong and how we can fix it.”

She is also a proponent of quotas to ensure organisations get serious about diversity.

“We have quotas in everything else we want to achieve,” Ms Barnes said. “Targets are not the same.

“We have KPIs for everything else, why not in diversity? Make it happen. If we do that a team will be put on it, and it will be resourced.”