With CBH Group in the midst of an internal review of its structure, Business News thought it an opportune time to sit down with CEO Andrew “Andy” Crane at Julio’s in West Perth to discuss his career to date, and the grain cooperative’s future. 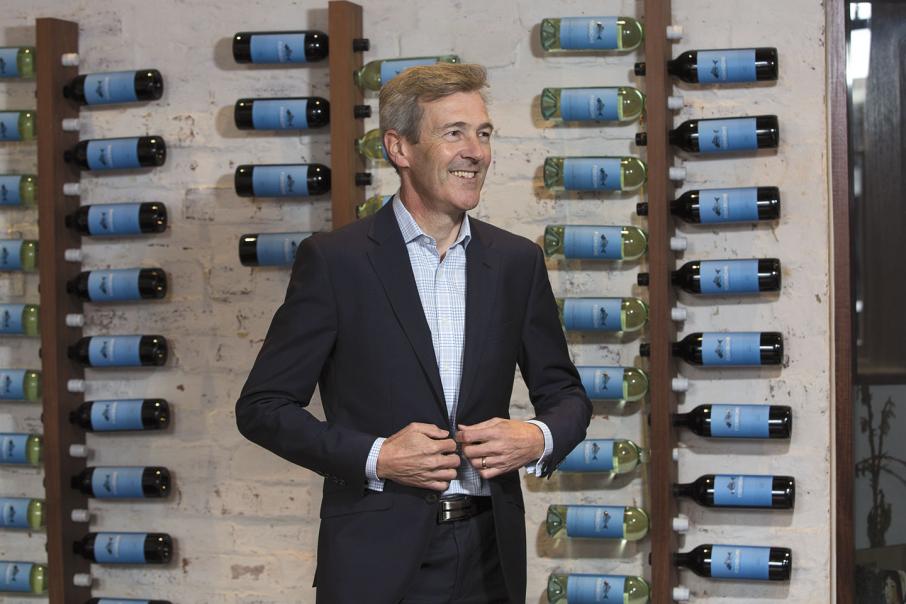 With CBH Group in the midst of an internal review of its structure, Business News thought it an opportune time to sit down with CEO Andrew “Andy” Crane at Julio’s in West Perth to discuss his career to date, and the grain cooperative’s future.

Born and raised in the UK, CBH Group CEO Andrew Crane arrived in Perth in this late 30s after a chance conversation at a conference.

While he now heads the nation’s leading grains industry organisation, holds a bachelor of science in environmental studies and a PhD in agriculture, and is a fellow of the Australian Institute of Company Directors, Dr Crane admits he did not display a great deal of leadership potential at his grammar school in England.

In fact, he was jolted into action only after receiving a disappointing set of A-level results (equivalent of ATAR).

“I did not get to the uni of my choice, so did a sandwich degree in environmental studies. I worked my socks off. After that I went off to complete a three-year, full-time PhD.”

The PhD included driving a motorbike to, and around, Israel for a year, doing research.

“After that I thought I’d be a lecturer, but academic jobs were thin on the ground, so I joined a diversified industrial company as a management trainee, which taught me all about the grain, malt and brewing industry,” Dr Crane said.

Running a plant in the north of England gave him his first chance to develop his leadership skills.

“I got to run a maltings business, (and it was) a huge steep learning curve. It was up north and I was a southerner. I had lots of show downs, and learned a lot,” Dr Crane said.

His next move was into international sales, where he was charged with finding new markets.

“I had the best job ever – and got to travel the world and visit breweries,” he said.

“I was not allowed any existing accounts, so had to find new markets in Central America, South America, the Caribbean and Africa. I went off as a travelling salesman, and learned a lot about sales from doing it.”

Dr Crane said there were any number of ways to further a career, and sometimes the journey was not always linear.

“Volunteer and try different things,” he said. “Rather than think the next promotion is the role above you, maybe take a role sideways and move around the business. As you go higher you will need that breadth of understanding.”

Outside CBH, Dr Crane has a strong interest in education. He is chairman of the Australian Grain Institute, which has a focus on up-skilling people in the agriculture sector.

He also sits on the council of Curtin University, and CBH has established a sizeable fund to support grass roots causes in the Wheatbelt.

Recent harvests have been good for growers, but the impact of the slowing Western Australian economy is still being felt more broadly, according to Dr Crane.

“Demand for grains is growing, but that is also stimulating production in Ukraine, Russia, Brazil and Argentina,” he said.

“So demand is stimulating production and prices are being dragged down in the grain market. The weakening of currency has helped a little, and with two good harvests and another one coming, things are improving.”

Overall, however, Dr Crane believes the long-term future for the WA economy is fine. “As for the broader economy, the short term feels painful, whether you look at commercial property vacancies or former oil and gas people driving for Uber,” he said.

Agriculture is one of the bright spots, although even here he has some concerns.

“We need to invest in the technology and then target the right market segments for us,” Dr Crane said. “For agriculture, that means the growing middle class in Asia focused on quality and security of origin.

“I worry about research in the state, particularly the recent cuts to the Department of Agriculture and Food. I hope these changes are being made to improve it, and lifting the productivity of our farmers.”

It’s well known that CBH rejected an unsolicited offer from Australian Grain Champion earlier this year, and Dr Crane said growers’ response to the decision indicated their support. “The growers have supported this decision very strongly,” he said.

“So now we’re in a much more constructive mode of going to our growers with options of change of structure, which will include a listing, so our growers can make that decision themselves.

“If they want us to corporatise, and do a listing, we will do that for them; if they prefer the control and low fees, then we can keep it as some form of a cooperative.”

Wesfarmers is often put forward as an example of a cooperative that has demutualised with great success, but conditions are slightly different for the grain growers, Dr Crane said.

“Wesfarmers’ focus for growers at the time was partly as a rural retailer, but there were other options available,” he said.

Three options will be put to grain growers, and Dr Crane said growers would then indicate their preference through a survey.

As for external challenges, CBH Group moves a physical product down a supply chain into a market, so you might think there were limited opportunities for digital disruption.

“Digital could disrupt the transaction part of the supply chain between the grower and the market, but the physical product still has to be moved,” Dr Crane told Business News.

“The opportunities for growers to share anonymous farm production and husbandry data so they could level up the bottom quartile to the top quartile could make a massive difference to productivity in the state.”

Social media is not something Dr Crane uses to a great extent.

“I see its power, but other than Linkedin I don’t use it very much myself,” he said.

“I have not used it as a tool to communicate to staff, as I tend to prefer face to face for that if I can. I might be blind to something here so am planning to have a go at using Yammer in the next few weeks.”

Dr Crane grew up in a household that listened to Radio 4 (in England) from dawn to dusk.

“Strange to say news, current affairs and light entertainment was the soundtrack to my youth, because it should probably have been T-Rex or something,” he said.

“I still have news radio on all the time, and enjoy discussion programs, (such as) Insiders on a Sunday morning (ABC TV).”

As for reading material, Dr Crane said he tended to gather up past editions of Business News and Harvard Business Review and have a ‘reading fest’ every time he was on a plane.

He is currently reading Small Island by Andrea Levy, a novel about Caribbean immigrants to the UK set just after WWII.

“There are ties there about our own journey of moving to another country and fitting in, but it says more about the current trend of the world ‘closing in’, which worries me a lot,” Dr Crane said.

“I hope we are not going back to a small-minded view and wasted posturing that pushes countries apart. The ties of trade should be something that stops us going to war.”

Use of the word ‘guys’

Rather than worry about the word ‘guys’, as highlighted recently by current Australian of the Year David Morrison, Dr Crane believes it is better to talk about what we are doing about the lack of gender diversity in organisations across Australia.

“There’s lots of talk and good intent, but there are still big gaps at the C-suite and board level,” he said.

“In my own executive team we only have one female, so we’re working hard at CBH on all parts of the pipeline to recruit and retain women in our business.

“To achieve this I have found we almost need to tailor solutions individually so we can retain as many women as possible particularly to help them successfully combine having a family and maintaining a strong career path.”