CBD sales nudge $1b in a sharp turnaround

Investor interest in Perth’s office market is set to intensify in the new year after city sales hit fresh highs in 2011 on a rapidly declining vacancy rate. 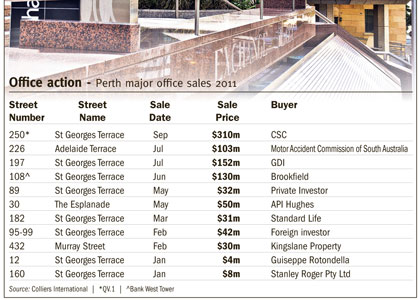 Investor interest in Perth’s office market is set to intensify in the new year after city sales hit fresh highs in 2011 on a rapidly declining vacancy rate.

Nearly $1 billion worth of city office property has changed hands this year, setting a new benchmark for CBD sales as investors scramble to get exposure to the Australia’s hottest office leasing market.

And the deal flow is set to continue into the new year amid talk that Stockland’s half share in Exchange Plaza is under due diligence and likely to sell for as much as $160 million.

Stockland’s sale of its half share of the Bankwest tower to Brookfield for $130 million in June was one of the biggest city sale transactions of the year and reflected a yield of 8.35 per cent.

The sale was part of an asset swap that resulted in Stockland acquiring two residential projects in Perth’s northern corridor for $271 million.

And it is consistent with its strategy to exit the commercial property sector and focus on retail, residential and retirement assets.

Market watchers expect significant interest in Exchange Plaza, which has only been on the market since November.

It’s jointly owned by Stockland and Private Property Syndicate, which includes the superannuation funds of Australia Post, Qantas and the Reserve Bank among its investors.

If the Exchange Plaza sale is completed before December 31 it would take the total value of city office sales in 2011 to $1.05 billion.

It’s an extraordinary turnaround from 2010 when there were only two significant sales totalling less than $70 million.

And with the city’s premium and A-grade properties almost fully leased and no significant new projects under construction, investor interest is forecast to intensify in 2012.

“There’s strong investor interest in Australia, both as a growth location and a stable economy and Perth is (within) the strongest growth state in the nation,” Mr Mickle said.

“It’s logical that there is a fair bit of money looking to be here and a lot of institutions are under represented in the Perth market.”

Local property syndicators, institutions and offshore investors all ploughed money into Perth office property in 2011, with the biggest single transaction, the $310 million sale of SAS Trustee Corporation’s half share in the QV.1 building, going to Commonwealth Superannuation Corporation (CSC).

Knight Frank managing director John Corbett said there was strong interest from syndication buyers as well as South-East Asian buyers, supported by the $41.6 million sale of 99 St Georges Terrace to a Singaporean investor.

“2012 will present some very good buying opportunities, with investors that have cash or equity able to purchase property at historically attractive prices,” Mr Corbett said.

The vacancy rate in the city plummeted from about 10 per cent at the beginning of the year to about 4 per cent across all classes of office property.

It’s great news if you’re a city landlord but leasing analysts warn it should sound alarm bells for CBD tenants that have not mapped out an accommodation strategy.

Colliers office leasing director David Cresp said there were no options for larger tenants in the city and for the next 12 months the focus would be on new office proposals.

“The developers are there with a number of proposed buildings that can be delivered in 2014,” Mr Cresp said.
“Tenants need to think ahead about what their requirements will be and making those pre-commitments otherwise we will be in a real bind in Perth.

“We are already dangerously close to zero per cent vacancy in Perth, for the larger tenants looking for space there are just not the options.”

The city’s major mining and energy tenants are driving the historic uptake of CBD office property and snapping up any large tranches of vacant space to meet their ever-expanding project requirements.

And with city rents ratcheting up by the day, a number of these global resources giants, including Chevron and Rio Tinto, are understood to be running the rule over new tower proposals.

A global economic downturn not withstanding, it may turn out to be the only way these major tenants can beat Perth’s spiralling rent costs and find space to accommodation their armies of city staff.