Butchers a cut above 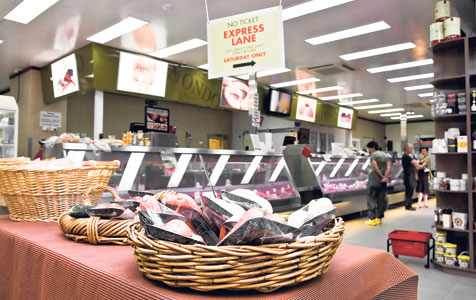 MEETING PLACE: The local butcher has long been the cornerstone of many small shopping strips.

Another store at my local shops pulled down the shutters this week.

They plastered the '70 per cent off' signs and 'closing down' banners across the windows while shoppers, including me, picked over the bones of the kitchenware business.

It's the second retailer to run up the white flag in our busy neighbourhood centre in as many months, and no doubt a bitter end for another small business.

Competition for our discretionary dollars is fierce in a tightening economy, and if the kitchenware store's closure is any barometer, the plethora of cooking shows on TV is not necessarily incubating mini master chefs out there in suburbia.

Added to this competitive retail environment is internet shopping, although no matter how you slice and dice those rubbery figures, online sales still only account for a tiny proportion of total retail turnover.

Perhaps something a little simpler, like good old-fashioned service, has a role to play.

As I battled to manoeuvre my overloaded shopping trolley back to the car this week, I overheard a couple of women chatting about the demise of the cookware shop.

They agreed it was a shame it was closing down but "they weren't very friendly, the couple that ran it," the younger of the two women remarked.

It was said with the conviction of someone who has probably never had to deal with the endless demands of the general public or endured the exquisite torture of being nice for eight hours a day, seven days a week.

Clearly, retail's not for everyone.

And it's hard to slap on a happy face when your business is undergoing a slow, inevitable decline.

For my money, if you want a taste of top-shelf service you need go no further than your local butcher.

There's something about those blue and white striped aprons that transform ordinary men and women into cleaver-wielding sultans of service.

From the friendly 'g'day' when you walk in the door to the flirty jokes and knowing winks, butchers have a patter all their own.

Perhaps you have to work that little bit harder to make people feel comfortable when you spend your day carving up dead animals and sloshing through offal.

Whatever it is, the retail sector could learn a lot from the local butcher.

When I was growing up, local legend had it that our neighbourhood butcher had a fondness for brawlin' of a weekend.

He regularly sported a black eye on Monday morning as he sheepishly laid out the trays of lamb chops and barbecue snags under the flickering fluorescent lights.

His personal proclivities could very well have been the death of his butchery, but such was the devotion of his mainly female customers to his fine produce and witty banter that these battle scars only endeared him to his clientele.

Which brings me back to the closing down sale at my local centre.

Who knows what unique combination of factors ultimately led to the closure of the kitchenware merchant, but the same women who picked over its bargain bins this week are probably part of the equation.

You see, women and mothers have a firm hand on the purse strings in many households.

And when the ill winds of an economic slowdown rattle through town, the homeware providores are among the first casualties.

It makes sense that when property prices are stagnant or falling, investing in your home is not a priority.

Apparently neither is keeping your man in smart suits and dapper weekend wear.

Next in the firing line is children's clothes followed by womenswear and, last of all, beauty and food.

Cosmetics tend to do well in economic downturns because there's nothing like fire engine red lipstick to take your mind off those post boom-time blues.

And sharing a pizza with friends goes some way to making up for postponing that European excursion.

I hope there aren't too many more closures at my local shops but it will be interesting to see what sort of business steps in to fill the gap.

Sadly it won't be a butcher, we've already got one of those.

But imagine where a bit of competitive tension could take his friendly banter.