Businesses, get a social life 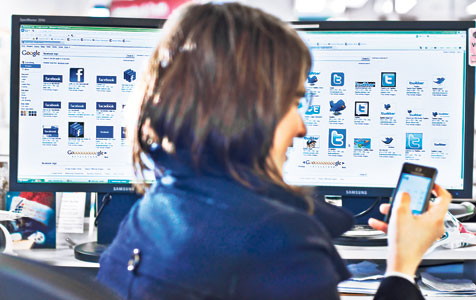 Networking is an important part of doing business. Not only is this good for business development, it is also good for your career, because the more people you meet, the more chances there are to meet someone who needs your services.

While you don’t go to a business sundowner or breakfast expressly to sell your products, we all know that business opportunities arise simply by your presence at an event – you connect, engage and follow up.

My view is that social media is much like a networking event. Don’t go in there to sell, but by being present, connected and engaged, you will get business from it.

Facebook is by far the largest social network globally, and 1.2 million Western Australians have active monthly accounts, with 67 per cent of them going in every day. That’s an online gathering of 800,000 WA people, which no WA business can ignore.

Wired Magazine recently released some figures from the United States on what sells on Facebook.

• 70 per cent of Facebook users follow brands because of special offers, 38 per cent are there to shop, 38 per cent follow events and 28 per cent want to give feedback to brands.

• 25 per cent of users have made a purchase directly from a brand’s Facebook page.

• 90 per cent of all purchases are directly or indirectly influenced by social media.

There are plenty of examples of WA businesses using Facebook well, and even attributing sales from their Facebook presence. Here’s just one I came across recently.

Calvin Chang and his wife (they have two children aged one and three) recently purchased a block of land in Landsdale and then set about trying to find a builder. Calvin wanted to view a display home but as he was too busy, he and his wife decided to look online instead.

When they did this they came across Dale Alcock’s blog web site (‘Dale’s Blog’) and they liked that there were people like them sharing their stories and ‘build journeys’.

What then drew them to sign with Dale Alcock Homes was the advice they received when they posted questions or comments on the blog or company Facebook page. It helped ‘humanise’ things for them and made a personal decision easier.

Their home is due for completion mid March 2014.

However it’s not enough to just have a Facebook page or a Twitter account and point to it on your advertising and web site; it’s about engagement, it’s about showing your clients, prospects and future employees that there is life behind the brand – a real beating heart.

Yes, this takes time, but with time you will learn what works and what does not. You will connect, and you will listen.

It also takes money, for although these platforms are mostly free to use, you need to appoint someone to coordinate the messages and keep the flow of information and engagement happening. There needs to be a strategy here, a reason for this to fit into your marketing, communications and plans.

I was in a well-known hardware store the other day and became annoyed that they did not have enough people on the tills. I tweeted my annoyance directly at them from the queue. Later I found out their Twitter account had but one tweet – pointing people to their web site. Opportunity lost. Imagine what they could do (education-wise, for example) with Twitter if they just had the will and some imagination.

A few days later I am in a well-known fast food outlet, and they have not put on enough people to service an increasingly grumpy line of customers. I tweet out my frustration again (hey, it helps me pass the time). Yet within five minutes I have a reply from the company sympathising with my plight, asking me to name the outlet and informing me they would be in contact with them, and me. The company was listening, and they turned what was a negative into a positive.

Ignoring the 800,000 Western Australians who go on Facebook everyday is no longer an option. It’s the same with Twitter and probably many other social media channels. No, you can’t do everything, but you have to do something; and by doing something, you might be amazed what can then happen.