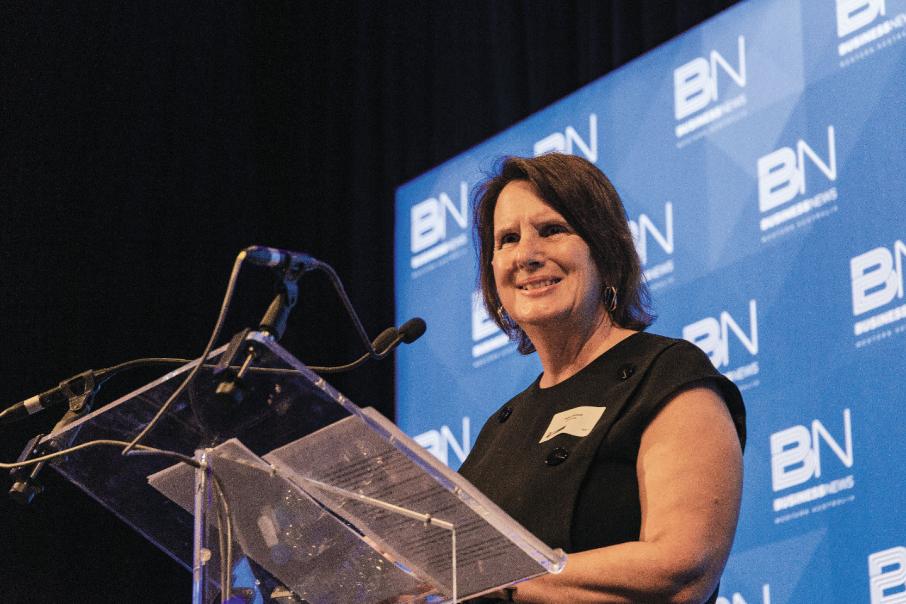 She encouraged people to read the Committee for Perth report titled ‘What we thought would kill us’.

Released in stages between 2011 and 2017, the report analysed multiple Perth projects, including the Graham Farmer Freeway, the Raffles Hotel development, Perth Arena, Hillarys Boat Harbour and the Mandurah rail line.

It highlighted the controversy as each project proceeded, followed by recognition of their benefits to the community.

The report provides context for the presentations by four business leaders who spoke about the profound changes in Perth and Western Australia since 1993, when Business News was first published.

Herbert Smith Freehills partner Tony Joyner spoke about the reshaping of many professions, including his own.

“In just 25 years, many of Perth’s leading law firms have gone from being local to national to international,” Mr Joyner said.

He noted that his first partner meeting was at Rottnest Island, while the latest was at Madrid.

“I grew up in Doubleview, this was never part of the plan,” Mr Joyner said.

Austal chairman John Rothwell told the lunch about the international expansion of the shipbuilding company he founded 30 years ago.

The company is still headquartered at Henderson where it employs about 850 people.

Austal also has four international shipyards, with its US operation being by far the largest.

Overall, the group now employs more than 5,2000 people, with 48 vessels currently under construction or scheduled.

Avita is commercialising Recell, a point-of-care device that is used to apply the spray-on skin developed by Dr Wood in her surgical work.

It delivers skin repair for burns victims but leaves no visible scar.

“With a huge amount of work and support from the Western Australian community we’ve been able to realise that dream,” Dr Wood said.

She recounted some of the setbacks as well as the local support.

“We went to Welshpool to find people to help us with plastic moulding,” Dr Wood said.

“We went to Go Medical in Subiaco and they helped.”

Dr Wood said she learned to move on quickly from setbacks.

“We learned very early that when people say ‘no’, you don’t waste time asking too many questions, you move on,” she said.

“There is an enormous amount of energy out there that is positive and helpful.

“You don’t have to waste your time with those who are knocking.”

Avita Medical passed a huge milestone last September when the Food & Drug Administration in the US approved Recell.

“I think that is testament to stubbornness,” Dr Wood told the lunchtime forum.

“When you’ve got a dream, hang onto it and find those who are going to help you realise it.”

Dr Wood said she was looking beyond Recell, which delivered skin cells.

“What we need now is to deliver point-of-care three-dimensional skin printing with all the structure as well as the cells,” she said.

“And there are people who can make it happen.

“That is the dream. Will we achieve that? Hell yes.”

Ms Lamont, who recently became chair of the Committee for Perth, also has big plans for the future, but first she recalled how different life was 25 years ago.

A trip to Yallingup involved traffic snarls over the old Mandurah traffic bridge and diverting to rostered petrol stations to fill up the tank.

Now she enjoys a smooth drive on the Forrest Highway and the choice of 24-7 petrol stations that serve good coffee.

“Whatever happened to Emu Export and Swan Lager, or even Redback, which was a phenomenon in its day? There is now a lot more eating out. We’ve seen the rise of coffee culture, liquor licensing has had a revolution, and the inner city is more vibrant,” Ms Lamont said.

“When I opened my food and wine shop on St Georges Terrace in the mid 1990s, my research told me that more people slept in the hospital and city hotels than slept in their own beds as inner-city residents.

“Our inner-city residential population has more than doubled in 25 years. We are actually moving to vibrancy after 5pm.

“In tourism, our events calendar continues to grow; there are a few gaps to fill but it is getting there.”

“They equally improve our quality of life and entice visitors,” she said.

However, WA still needed to be better.

“We have been continuously improving and we need to stick with that ethos,” Ms Lamont said.

“I want Perth to be a city where our talented, bright youth want to stay, create and add value, and where global talent chooses Perth to grow their careers and bring up their kids.

“Where we can become the first choice for international students – that needs urgent visa reform right now.

“We need to find a clever and honourable way to recognise and celebrate Noongar people in this town. It’s not only what we need to do, it actually makes sound commercial sense.”

Ms Lamont said the state needed a narrative to be proud of its strength in mining and resources and must also commit to diversifying the economy.

“I want to be known and loved for great food and wine that has provenance and is genuinely special and delicious.”