The owners of a new pub west of the CBD want to get the place jumping. Carolyn Herbert reports. 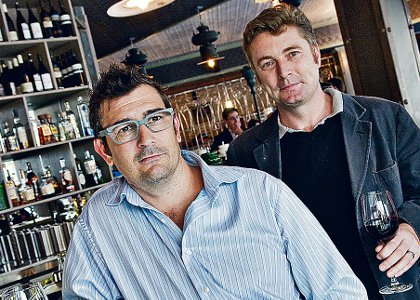 “Greg and I went on a trip with a friend of mine who is an interior designer and we drove around to cast iron places and ended up acquiring this eclectic mix of bits and pieces ... we called it Euro-trash,” Mr Newnham told Gusto.

With more than 10 years managing and renovating pubs, including Tiger Lils and The Garden, Mr Newnham says he was looking to target his next venture at a more mature crowd.

“We wanted to build an approachable pub for adults,” he says.

“I did a lot of pubs for kids and it was pretty unsatisfying seeing what happens to them; building The Garden for grown-ups made me think there was an avenue for catering for that market.”

Some research on the types of food available from other West Perth venues helped the three owners decide what to put on the menu at The Brown Fox.

“It’s either a $10 sandwich or a $50 pasta dish and West Perth only had an Italian offer like Perugino’s, Julio’s and Villa D’Este – there was nowhere to go and network and have a drink,” Mr Newnham says.

Head chef Damien Young, who headed up Subiaco’s Bistro Felix, designed a French-inspired menu for the pub, which Mr Newnham says is different to anything on offer in the area.

Despite the lavish fit-out, Mr Newnham is adamant that The Brown Fox is a pub and not a restaurant.

“This is without a shadow of a doubt a pub with a good food offer,” he says.

“The menu is pretty ‘blokey’ given where we are located and there is a great selection of steaks, which are served on a wooden board with a Laguiole, which is one of those knives that every French boy gets given when they come of age.”

The next challenge for the trio was thinking of a name to suit the theme of the venue.

They thought ‘The Brown Fox’ sounded more European than something like the ‘Slug and Lettuce’, for instance, which sounded a bit too British.

“I always said we needed a name that people can spell, because everyone comes up with names like Andaluz or Duende or whatever and people try to Google it and they can’t spell it and can’t find it,” Mr Newnham says.

The partners set up a cidery on site to give The Brown Fox another point of difference.

“We built it specifically with the cidery in it, but sourcing cider apples instead of standard table apples has been really difficult, so we have been stalling the production of cider for the past couple of months,” Mr Eastwood says.

Mr Newnham says the shortage of hospitality businesses in the West Perth area remains a challenge, with locals more inclined to frequent the Perth CBD or Subiaco.

“According to the last census, West Perth was the highest-growing residential suburb in the country but there hasn’t been that flow-on effect of services; if someone opened a small bar or another restaurant near us that would be great because it would develop a new precinct,” Mr Newnham says.

Open now for four months, the owners are very specific in the way that they market the business.

“It took a while for people to catch on because we really just pushed the doors open,” Mr Eastwood told Gusto

“There was no fanfare because we didn’t want people to come in and find something wasn’t working properly, so when they came in slowly it allowed us to refine our processes.”

Mr Newnham says a low-level awareness campaign and word of mouth seems the best way to promote The Brown Fox.

“I feel that pubs and restaurants have difficulty advertising because it comes off as not credible, so I think certainly from my point of view people need to taste it and feel it themselves, and that kind of organic growth will work for us.”