Boom manufacturer moves with the times

The second part of our series on farming focuses on a successful equipment manufacturer in the Wheatbelt town of Narembeen. 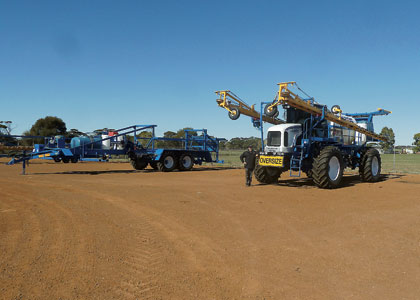 DYNAMIC APPROACH: Max Hebberman with some of the large boom spray equipment manufactured by his company, Sonic Boomspray.

The second part of our series on farming focuses on a successful equipment manufacturer in the Wheatbelt town of Narembeen.

WITH a family farming history dating back to the 1920s, Max Hebbermann had farming in his blood. When, through family succession, he inherited a property just south of Narembeen, which on its own was not viable, he leased a further farming property near Hyden.

Looking to further complement the family business, in 1995 Mr Hebbermann bought what was then a small contract spraying business of six machines, and a basic engineering capability to manufacture spraying equipment.

The business, Sonic Boomspray, operated from Narembeen but covered a region with a radius of about 150 kilometres. It soon became apparent that farmers were tending to buy their spray equipment rather than contracting, and so Mr Hebbermann decided to focus on the engineering fabricating business of Sonic.

In the early 2000s, he sold the contract spraying part of the business to concentrate solely on manufacturing spray machinery.

Starting with a turnover of 10 basic machines, Sonic now manufactures and assembles up to 60 sophisticated pieces of equipment per year.

The business is aiming for growth of 35 per cent over the next three years, and expects to peak at around $8 million per annum production revenue.

The growth of the business has been helped by broader trends in the farm sector. The movement away from plowing land for weed killing, and seeding methods used to avoid moisture loss, lend themselves to chemical and fertiliser spraying as the preferred method of application.

This, together with the consolidation of farms into bigger properties and the reduction in sheep numbers to allow for greater crop cultivation, has allowed paddocks to be much larger, making spray application more economical.

Sonic has been one of the leaders in the development of boom spray application technology and now has a significant proportion of the Western Australian and South Australian market. There are plans to expand the business into Victoria and New South Wales.

Boom spray equipment varies in quality and size depending on the farmer’s budget and land coverage requirements. There are self-propelled tractor sprays, truck-mounted, and trailer-mounted sprays pulled by an independent tractor. The latter is the most common. The large, self-propelled models can be priced up to $420,000 including GST.

Boom spray width can be up to 48.5 metres with a spray volume capacity of 13,000 litres. Mr Hebbermann believes this dimension machine, which is his largest, is the largest broadacre boom spray in the world.

The process of crop spraying is an art in itself, requiring very specific spray density with consistent, even coverage, notwithstanding the unevenness of the paddock being sprayed. This is achieved partly through the design of the boom spray and the spread of, and types of, nozzles used.

The steadiness of the boom spray machine as it moves across the paddock is vital. Sonic uses its own cable suspension design rather than the more usual truss style.

The cable suspension system provides cushioning to the inevitable bumps in the paddock. This ensures both a consistency of spray and precludes a loss by drift or wind influence.

In Narembeen, Sonic’s factory is separated into three sections – fabrication, assembly and painting. The base machinery such as the trucks and tractor (for self-propelled equipment) is bought from suppliers, but Sonic manufactures the spray machines from this point on.

The base chassis and boom spray mounting is fabricated to specification, and then assembled to the finished product, before being painted.

Sonic has 20 base models of machines from which to choose. All machines, except the occasional display version, are made to order and specification.

Mr Hebbermann carries about 5,000 inventory lines for hoses, nozzles etc, catering for the varied sizes and quality of machinery being assembled.

In peak period of December to April, Sonic employs up to 25 people, with 15 on staff during the other months.

Most of the permanent staff lives in or around Narembeen, with temporary staff brought in for the peak period, including the use of 457 visa arrangements. Staff skills include drafting, engineering, painting, welding, sales and administration.

Like many engineering works, finding skilled staff has become difficult, in addition to the pressure of having to compete on wages with the mining and mine service businesses.

Margins in farm equipment are not comparable to the mining industries and hence, like many businesses in Australia, Mr Hebbermann finds the staffing and labour costs a particularly difficult aspect of his business.

Maintaining his business in Narembeen is part emotion and in part his continuing attachment to his farming property.

One of the challenges for the business is the large seasonal fluctuations. This year, for instance, the outlook for large parts of WA remains uncertain, with some areas getting good rain so far but more needed.

The good news is that wheat prices are looking up due to the misfortune of American farmers, who are experiencing a very dry summer.

Mr Hebbermann is used to such seasonal fluctuations. His entry into the SA market was instigated by one such downturn in WA, with SA experiencing a concurrent good season. Sales are now about 50:50 with SA but vary markedly from year to year.

To further mitigate this seasonal variation, and to progress the growth of the business, Mr Hebbermann intends to take Sonic into the markets on the eastern seaboard.