A new owner is reshaping the long-running coffee roastery, with multiple acquisitions and an environmentally focused packaging company. 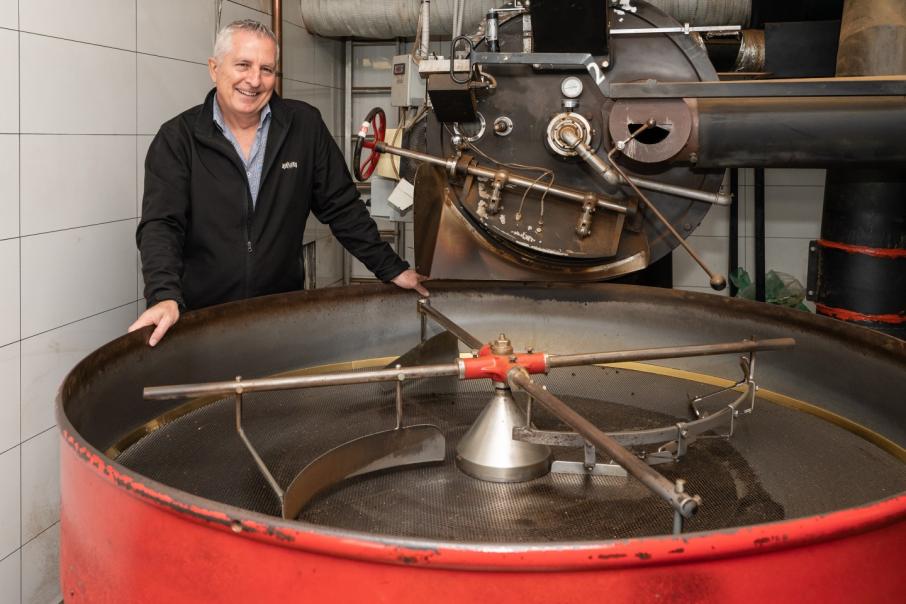 Blair Pedler with the centrepiece of Bonissimo’s Osborne Park facility: a coffee roaster that dates from 1957. Photo: David Henry

Takeaway coffee cups are a guilty convenience for many people.

The plastic-lined cups add to the scourge of single-use plastics, which are widely recognised for their environmental damage.

Bonissimo Coffee Roasters in Osborne Park is trying to do something about it.

Blair Pedler, who bought the business in 2017, has established a sister company, Capsule Earth, that plans to invest $1.4 million in a manufacturing plant.

It will produce a new range of takeaway coffee cups using biopolymers that are 100 per cent organic and fully compostable.

This will replace the traditional plastic-lined cups that dominate the market.

For Mr Pedler, the new venture is a meeting of his personal values and commercial opportunities. “It seemed to me that in businesses like ours, if everyone just makes a little change, it makes a big difference,” Mr Pedler told Business News.

Mr Pedler was new to the coffee business when he bought Bonissimo, which is one of Perth’s larger roasters.

He spent most of his working life at Nexus Risk Services, which he jointly established with Mark Patterson in 1995.

He sold out in 2013, when Nexus had grown to have 57 people and five branches.

Mr Pedler subsequently became a shareholder and director of Melbourne-based Schweigen, which has become the number one rangehood supplier in Australia.

“That’s a nice business but I was still bored,” he said.

“I wanted to get into a business where the family was involved.

“It was 2016 and the state economy was slowing down, and I thought I need to get into something that was recession-proof.

“That led me to coffee.”

“When you go to a party and say you work in insurance, they quickly change the subject, but if you say you are a coffee roaster, you will have a friend for life,” he said.

The business he bought had a long pedigree, having been established in the early 1970s in West Perth.

It was originally the sister company to the Cafissimo cafe chain, but the two came under separate ownership more than a decade ago.

The sector is extraordinarily competitive.

Through a series of acquisitions over nearly 20 years, Oakover owns three major brands.

Other competitors include Gesha Coffee Co, which was established in Fremantle in 2014 by Carlo Landucci and Daniel Pano.

A neighbouring roastery in Osborne Park is Leftfield Coffee Roasters, which was launched in 2016 by Kamran Nowduschani and Louise Gordon, the founders of Fiori.

Mr Pedler has made three acquisitions of his own since he bought Bonissimo. The first was Bunbury Coffee.

“It’s one of the few places in the South West you can get equipment, training, beans, and technical assistance,” Mr Pedler said.

“There are a lot of roasters but not many provide a full service like we do.”

That was followed by the takeover of a coffee distribution business in the South West.

The cafes were sold in 2019, while the roastery expanded into its current premises.

Mr Pedler said there was a great team at Antz, including Mr Muzeroll’s sons, and he was thrilled they had stayed in the business.

He said Antz already had a commitment to being environmentally responsible.

This included using one of Perth’s first electric delivery vans, a Renault Kanga.

Another big attraction was its large warehouse space, which Mr Pedler plans to use for the new manufacturing facility.

Bonissimo’s business is mostly B2B, servicing the hospitality sector in general, and cafes in particular.

It has 200 customers in Western Australia, from Broome to Albany, and more interstate. The business has modest retail sales, mostly online.

It also recently launched a trial at an IGA store in Perth but otherwise has not chased sales to the supermarkets.

The move into manufacturing started with the purchase of a machine to pack coffee into capsules.

“We put our toe in the water with the packing machine, it does our coffee and packs for other roasters,” Mr Pedler said.

He then saw an opportunity to supply cups, so he imported a container load from China.

From a commercial perspective, that went better than expected.

However, Mr Pedler started to look more closely at his environmental footprint.

He was inspired in part by the ABC television show War on Waste and his own love of the ocean, where he had seen the impact of plastic pollution.

Mr Pedler looked at how his business dealt with its own waste, which previously included kilos of waste coffee grounds.

“It’s a sterilised organic product that should be going into FOGO,” he said referring to ‘food organics and green organics’.

“Just about every cafe in Australia throws that in the bin.”

A handful of municipalities across WA, including Bunbury, Melville, and Bayswater, have introduced special FOGO bins.

“We ended up reducing our waste management costs by doing it that way, because there is a levy, the landfill levy, on the skip bin,” Mr Pedler said.

“That’s probably the most expensive way to go.

“By doing some research, we discovered we can save ourselves some money and do the right thing.” 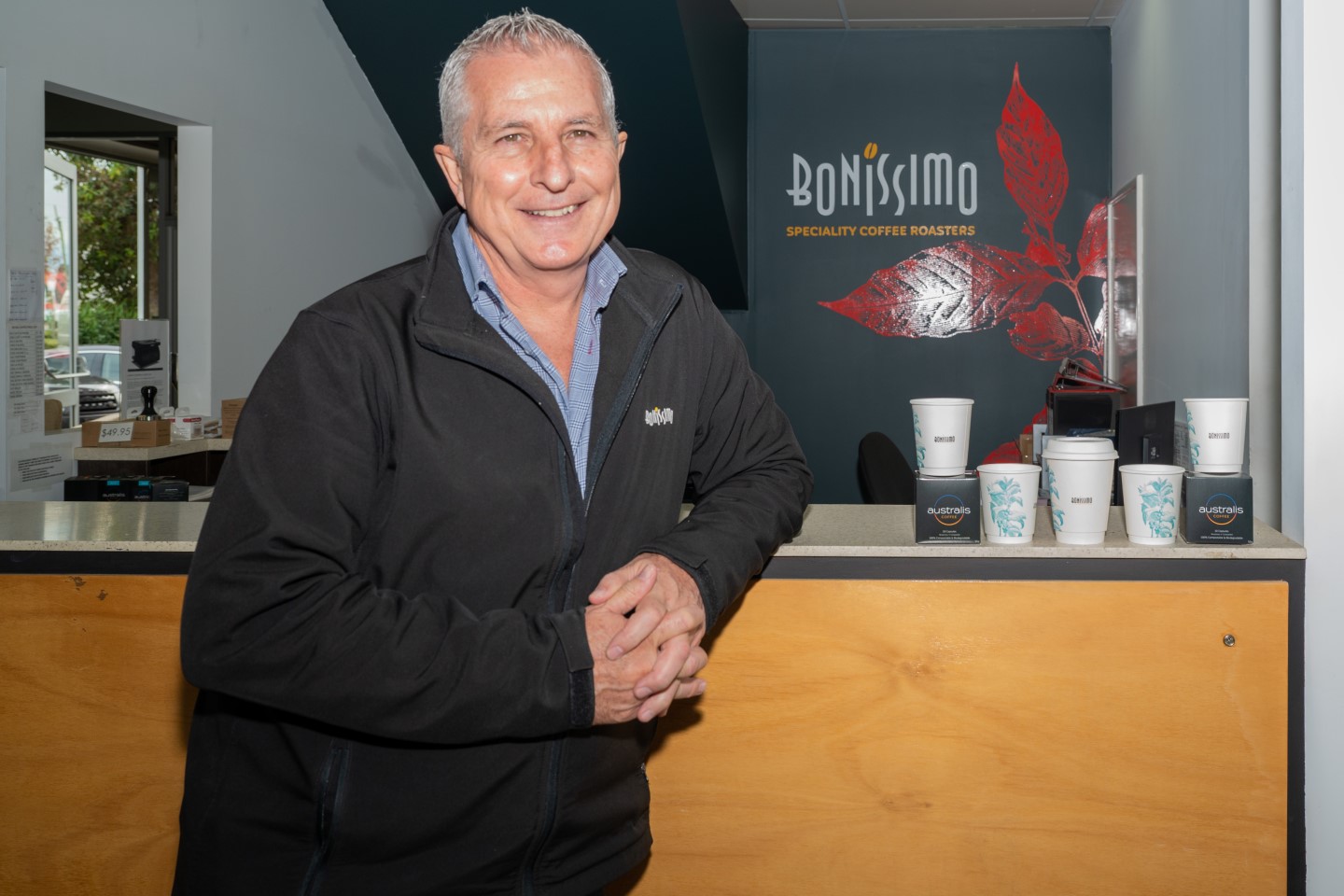 The next step was to look at manufacturing more environmentally friendly products.

“We are always looking for alternative markets and owning more of the supply and distribution chain is one way to do that,” he said.

Mr Pedler estimates 90 per cent of customers buy their coffee in a plastic-lined cup.

Some people have reusable ‘keep cups’ but they were not accepted during COVID.

“We discovered we could produce a compostable cup, and we have a captive market already.”

The new venture dovetails with the WA government’s announced ban on single-use plastics.

The second stage of the plan, starting in December 2022, will ban plastic-lined takeaway coffee cups and lids, along with cotton buds with plastic shafts, polystyrene packaging and microbeads.

“We go a long way towards dealing with that,” Mr Pedler said.

With help from consulting firm Axito, Mr Pedler discovered the federal government offered support to businesses like his.

Through the government’s entrepreneurs program, he obtained a small grant that helped fund his business planning and systems upgrade.

More substantively, Mr Pedler has been offered a grant of $349,000 through the Manufacturing Modernisation Fund to help fund his $1.4 million project.

Bonissimo was one of six WA businesses to be offered a grant under this program, with others including IPI Packers, Blasta Brewing, and Veem.

“It means companies like us can manufacture locally and get rid of all those issues to do with importing.

“[We can] create jobs and put our destiny back into our hands.”

As well as manufacturing coffee cups, the grant will allow the business to expand from one packing lane for coffee pods to six lanes.

That will lead to more work for Bonissimo’s Osborne Park neighbour, Activ Foundation, which employs people with disabilities.

Since last month, Activ staff have been employed to pack the coffee pods, or capsules, into boxes.

“They can pack the boxes much faster than we were doing it,” Mr Pedler said.

“They have a team of people that just rip into it, and they are bang on with everything, very accurate.

“Their staff come into our cafe every day for lunch and drinks and have been doing so for years … it’s nice to be able to reciprocate.

“They are always looking for new projects.”

Mr Pedler is aiming to begin production of cups later this year and start full production in early 2022.

Bonissimo is not alone in changing the way it operates ahead of the new regulations.

Recently, Brookfield Properties announced steps it had taken to reduce its use of plastics.

In its offices across Australia, it has identified, removed, replaced and/or avoided more than 25 single-use plastic products, including snack packaging and water bottles.

This will save an estimated 100,000 single-use plastic items per year.

In addition, it has worked with retailers at Brookfield Place to remove a range of single-use plastics, amounting to 700,000 items per year.

Fortescue Metals Group has announced it will remove all retail single-use plastic beverage products from across its business.

It estimates this will prevent more than 8,000 units of plastic from going to landfill every day.