Blend team has ingredients for B2 and beyond 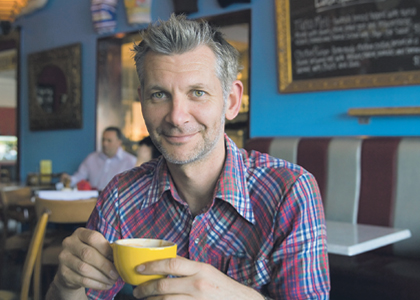 RIGHT MIX: Almin Fulurija says it was a good idea to locate Blend Cafe in Melville, which is proving attractive to young professionals and young families. Photo: Annaliese McDonough

Business partners Almin Fulurija and Talwyn Widuer have established two thriving restaurants in Perth’s southern suburbs and are cooking up bigger plans for the future.

Their first venture, Blend Cafe, opened its doors in Marmion Street, Melville, in 2008, with four staff members. In 2010 it expanded into the space next door, doubling in size, and adding a wood-fired pizza bar.

The friends now employ 35 people at Blend and at their latest venture, B2, in nearby Samson, which opened five months ago.

They have plans to open a small bar next door to Blend to complement the cafe, which is unlicensed, and cater for the younger people moving into the area.

Blend is open seven days and offers breakfast, lunch and dinner menus. B2, in McCotnbe Avenue, began opening all day but has since been scaled back and now opens only on weeknights and all day at the weekend.

Owning and running their own restaurant has been a long-held dream for Mr Fulurija and Mr Widuer.

“We always spoke about starting a business for many years and when we were working together 15 years ago we always had the idea and the vision, we just never had the funds,” M' Fulurija told Gusto.

“My business partner ran a bookshop for many years, so he had quite good business knowledge. I ran some small ventures at uni, like a little record store and worked in cafes through uni as a barista.”

The pair rely on an executive chef to make sure of quality control and consistency at both restaurants.

“The executive chef looks after both places and tries to keep the quality and the standard of both places pretty much the same,” Mr Fulurija said.

“That was essential for us; he has an interest in B2, which makes it a lot easier.”

Mr Fulurija said starting their business in Melville was a good choice.

“Melville’s an up and coming sort of area, with young professionals and young families in it, and we’ve noticed the area change over the past four years,” he said.

Social media was an asset for their business and had enabled them to begin marketing their next venture before it started trading.

“We’ve got a page up, with around 200 followers in the past couple of weeks, and we’ve just basically prepared people for what’s going to happen, so you’re already building a clientele and you haven’t opened the doors yet,” Mr Fulurija said.

But there’s a downside. Social media has made it easier for businesses to stay in touch with customers but it has also made every customer a food critic.

“Unfortunately, you can’t please everyone and we’re aware of that, we do our best to make sure if a customer comes in they walk out happy, but unfortunately you’ve got websites like Urbanspoon (restaurant guide) and that can be a positive or a negative,” Mr Fulurija said.

He said he expected to pick up more business at B2, with a deli due to open in the area.

“Also, a bakery has been taken over in the past two weeks, so they’ll open up before Christmas and that will make a huge difference,” Mr Fulurija said.