Blackstone Minerals has nailed a plethora of new nickel sulphide exploration targets from its maiden geophysical survey program at the emerging Ta Khoa project, west of Hanoi, in northern Vietnam. The induced polarisation survey showed a strong correlation with existing positions of nickel mineralisation at the flagship Ban Phuc prospect and outlined new targets at the Ban Khoa and King Snake prospects nearby. 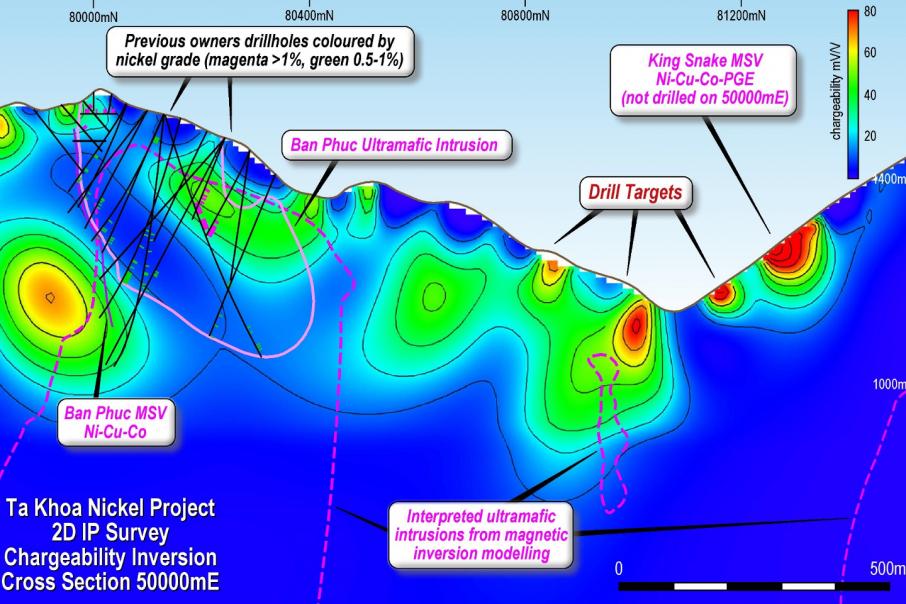 The results from the ground-based induced polarisation, or “IP”, surveying showed a strong correlation with known positions of high-grade disseminated nickel sulphide and massive sulphide vein mineralisation at the flagship Ban Phuc prospect and outlined new targets at the Ban Khoa and King Snake prospects nearby.

The company is now planning a phased program of drilling on two rigs to prove up and validate historical results from Ban Phuc and commence exploration at Ban Khoa and King Snake.

Blackstone is the first company to undertake IP surveying at Ta Khoa and the geophysical technique has proven its value thus far, outlining multiple locations of potential nickel sulphide mineralisation across the project.

Based on the success to date, the company will now extend its geophysical programs to the Ban Khang and Ban Chang prospects, which lie within a 5km radius of the existing nickel concentrator and processing facility at Ta Khoa.

Discussing the recent geophysical survey results, Blackstone Managing Director Scott Williamson said: “… the first ever IP survey at Ta Khoa suggest(s) we have an extensive system of magmatic nickel-copper-cobalt sulphides. We look forward to continuing our shallow drilling and commencing the deeper drilling of the new targets with a second drill rig mobilising over the coming weeks.”

Blackstone has an option to acquire 90% of the Ta Khoa nickel project, which includes the mothballed Ban Phuc underground nickel mine and plant, from Canada’s AMR Nickel Limited.

The previous owners ploughed more than USD$136m into the mine, generating USD$213m in revenue, during three years of falling nickel prices, before scuttling the project in mid-2016.

Ta Khoa is connected to a local hydroelectric power grid, with a fully permitted tailings facility and modern 250-person camp.

The company said that it also continues to investigate the possibility of developing downstream processing infrastructure in Vietnam, which could produce nickel and cobalt products, to supply Asia’s growing demand in the lithium-ion battery manufacturing sector.

In this regard, Blackstone has commenced metallurgical test work on the lower-grade nickel disseminated sulphide Ban Phuc ore body, to develop a flow sheet for a product suitable for the lithium-ion battery industry.

According to company management, the acquisition of the Ta Khoa project will enhance the company’s existing battery mineral asset base, which already includes cobalt and nickel projects in Canada and the Silver Swan South nickel project in the Eastern Goldfields region of Western Australia.

While the previous owners focussed primarily on exploration and development activities at Ban Phuc, the company has broadened its search for additional nickel sulphide targets to its entire ground holdings, a strategy that now appears ably supported using geophysical surveying.

The short-term prize may lie within the narrow, high-grade massive sulphide vein mineralisation most recently mined at Ban Phuc that returned impressive drilling intersections like 2.02m @ 4.64% nickel, 3.59% copper and 0.18% cobalt from 258.7m down-hole.

This higher-grade vein mineralisation also includes impressive platinum group metal results in places, which are valuable by-products in their own right.

Higher nickel grades could significantly sweeten the high tonnage, but lower-grade disseminated sulphide ore streams, which are located throughout the project area.

With the geophysical work now vectoring Blackstone towards numerous nickel targets in Vietnam, the company is certainly in the right place at the right time, with commodity prices for the metal near six months highs at USD$16,000 per tonne.