Blackstone Minerals’ drilling program in Vietnam has continued to churn out some impressive nickel and platinum group metal results from its Ta Khoa nickel project, located west of Hanoi in northern Vietnam, with a surprising new discovery at King Cobra. Assays are still pending for this new nickel discovery whilst broad intercepts at the Ban Phuc disseminated sulphide zone continue to entice with 106m @ 0.45% nickel. 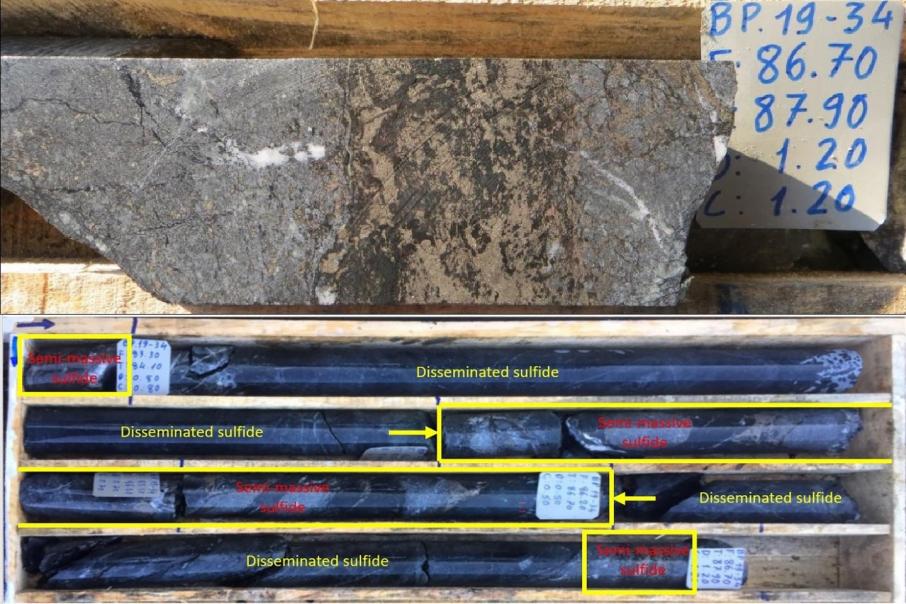 Blackstone Minerals drilling program in Vietnam has continued to churn out some impressive nickel and platinum group metal results from its Ta Khoa nickel project, located west of Hanoi in northern Vietnam, with a surprising new discovery at King Cobra. The new nickel sulphide zone hosts visual estimates of up to 20% sulphide mineralisation, according to the company.

The new King Cobra zone has been intersected in diamond drilling with the presence of visual sulphides confirmed via preliminary portable XRF analysis.

Whilst XRF analysis can not be fully relied upon, the existence of the shiny minerals in the sample is a good potential indicator of some exciting numbers to come.

The specific geological features of the King Cobra discovery are the first of their kind observed at the project and the company says that this may provide a vector towards a high-grade “feeder zone” mineralisation that is characteristic of a magmatic nickel sulphide deposit.

These deposits form when liquid magma rises through the earth’s crust and cools as it encounters cooler rocks. If the sulphur content of the magma is high enough – or is extracted from the surrounding rocks through melting – and if all the other geochemical essentials line up as the rocks cool further – the sulphide liquid can crystallise and form ore deposits containing metals such as nickel, copper, PGM’s and even iron.

…“the discovery of the King Cobra zone is a step change for exploration of the deposit. A substantial thickness of disseminated and potentially higher-grade Nickel – PGE mineralisation within a few metres of surface may prove to be a bulk mineable opportunity”.

Importantly, the company’s Ta Khoa project contains a mothballed nickel mine and 450ktpa processing plant that was operational between 2013 and 2016. It produced 20.7kt of nickel, 10.1kt of copper and 0.67kt of cobalt in its day, which was extracted from a high-grade massive sulphide vein.

The disseminated sulphide zone mineralisation has been intersected in drilling over an area spanning one kilometre by 500 metres and it is still open to the south-east and at depth.

Blackstone has since completed over 4,500 metres of diamond drilling into the Ban Phuc disseminated sulphide zone, which exists as stacked layers in the rocks surrounding the massive sulphide vein.

The massive sulphide vein at Ban Phuc is an extraordinary 640m in length and is known to extend at least another 450 meters at an average width of 1.3 metres. Compared to some of the more mature nickel exploration and mine provinces with lifespans of hundreds of years, Phan Phuc is a toddler with a mine life of only 3.5 years.

The Perth based company appears to be just scratching the surface of the disseminated sulphide zone and with its foot on several enticing nickel targets withn the project, things could hot up for Blackstone in the new year.

In May this year Blackstone announced its option to acquire 90% of the Ta Khoa project and it is now looking to turn out a scoping study that will evaluate the mining and processing options. The company will also investigate in-country downstream processing to feed Asia’s hungry electric vehicle industry.

Blackstone is currently working on packaging up a maiden mineral resource at Ban Phuc. For now, the rods will keep turning across the project, driven forward by the company’s recent purchase of its own electromagnetic and induced polarisation equipment, which are handy geophysical tools to help identify potential massive sulphide accumulations.

With the Ta-Khoa nickel-copper sulphide deposits globally-renown and successfully developed to a point previously, the stage looks set for a serious discovery here that has both grade and length.