Blackham Resources’ Golden Age gold deposit at Wiluna is living up to its name, delivering some outstanding high-grade drill results. Underground drilling of the reef continues to produce impressive intercepts including 1.8 metres at 39.68 g/t gold, 2.6 metres at 21.74 g/t and 2.7 metres at 17.32 g/t gold. The company is getting set to deliver on its staged upgrade to start mining the sulphides. 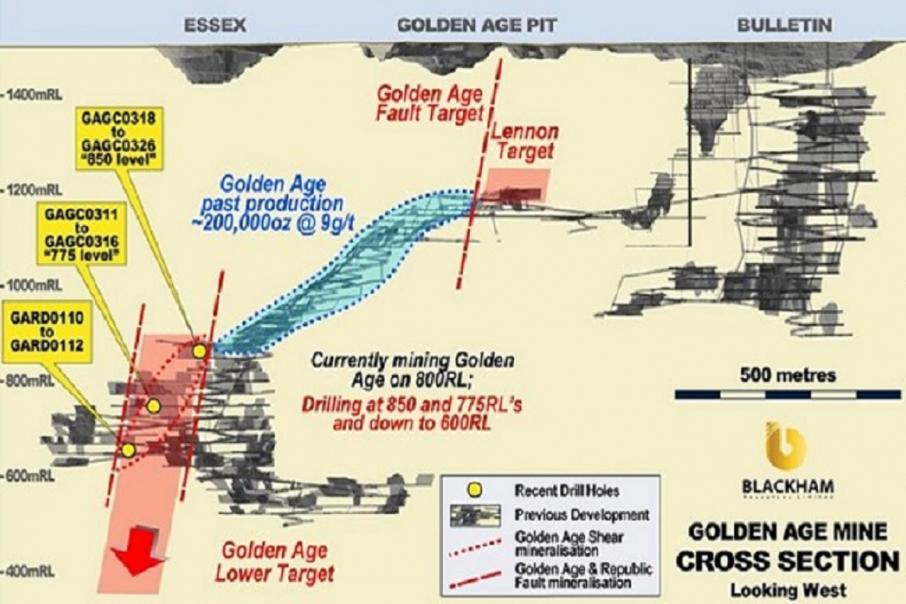 Blackham Resources’ Golden Age gold deposit at Wiluna is living up to its name, delivering some outstanding high-grade drill results. Underground drilling of the reef continues to produce impressive intercepts including 1.8 metres at 39.68 g/t gold, 2.6 metres at 21.74 g/t and 2.7 metres at 17.32 g/t gold.

Blackham’s Executive Chair, Milan Jerkovic said: “While the Company is focussed on optimising the mine plan around our large Wiluna sulphide resource and transitioning to gold concentrate production, these results also deliver on our parallel free-milling strategy”.

“We aim to extend the high-grade Golden Age orebody to sustain or increase production and improve transitional cashflow over the next 12-18 months ahead of sulphides production from September 2021”.

Blackham owns the Wiluna mining centre in the north-eastern Goldfields of Western Australia which boasts a serious resource of nearly 6.4m ounces of gold going 2.13 grams per tonne.

The company has undergone a raft of changes over the last 12-24 months which includes the appointment of new corporate and operational management teams and, most importantly, the development of a new strategy that will see it embrace and mine the significant sulphide gold resource at the project.

The first stream comes from the definition and remodelling of its vast inventory of underground sulphide ores. These resources are earmarked to produce a ‘conventional high-grade gold concentrate’ for sale into a lucrative and expanding marketplace and the company already has buyers lining up to take the product. This strategy involves a staged capital expenditure approach that will see it gear up properly to economically mine the sulphide ore resources.

The second revenue stream puts the finished gold product directly into the hands of the company and comes from processing the conventional high-grade, free-milling ores from various ore bodies at Wiluna, including Golden Age, Regent and Williamson.

The implementation of these parallel production paths will result in Blackham increasing its production to 120,000 ounces of gold per annum as part of its Stage 1 expansion over the coming year, with an escalation to over 200,000 ounces per annum planned in the years that follow.

Golden Age will play a key role in this program as Blackham continues to swell the resource inventory at this lucrative prospect. Golden Age is a free-milling quartz-reef that has an average grade of around 6 g/t gold however, recent drilling shows it can produce spectacular grades thereby gifting cheap ounces to the mill.

Modelling of Golden Age shows the orebody remains open at depth and potentially extends both towards the surface and at depth - the current drill program is focused on the lower levels of the mine.  A multitude of drill holes have returned assays of greater than half an ounce to the tonne gold.

Drilling targeting the deeper extensions to Golden Age below the 775 level, has also produced good numbers with broad zones of gold reef assaying 7.1 metres at 7.47 g/t gold, including 2.7 metres at 17.32 g/t gold.

Blackham is currently revising its overall exploration target for Golden Age and speculates that the reef could contain anywhere from 87,000 ounces up to 317,000 ounces going between 5 and 6 grams per tonne gold.

If the upper estimation is realized, this would deliver a solid feed into Blackham’s ‘free-milling’ inventory, underpinning the company’s escalation of the Stage 1 production.

Blackham is also advancing two additional free milling ore sources, with the Regent and Williamson deposits now the subject of additional drilling to bring the potential open pit resources into the mining schedule.

Blackhams share price took a jolt upwards this week, doubling from 1c to just over 2c as the market starts to get a handle on its staged production upgrade that will see it tackle the big sulphide resource on site with the right plant and equipment.

If it can get anywhere near its stated goal of over 200,000 ounces a year of production, Blackham will take on a whole new look and with its share price doubling this week, it seems that the market is starting to believe in the new plan.