ASX-listed graphite specialist Blackearth Minerals is shooting for a high-grade target of up to 34 million tonnes at its Ianapera project in Madagascar after final assays from a trenching program produced yet more impressive results. Latest assays include 14m grading 14.0% total graphitic carbon and follow news earlier this month of a whopping 18m intersection going 22.06% TGC. 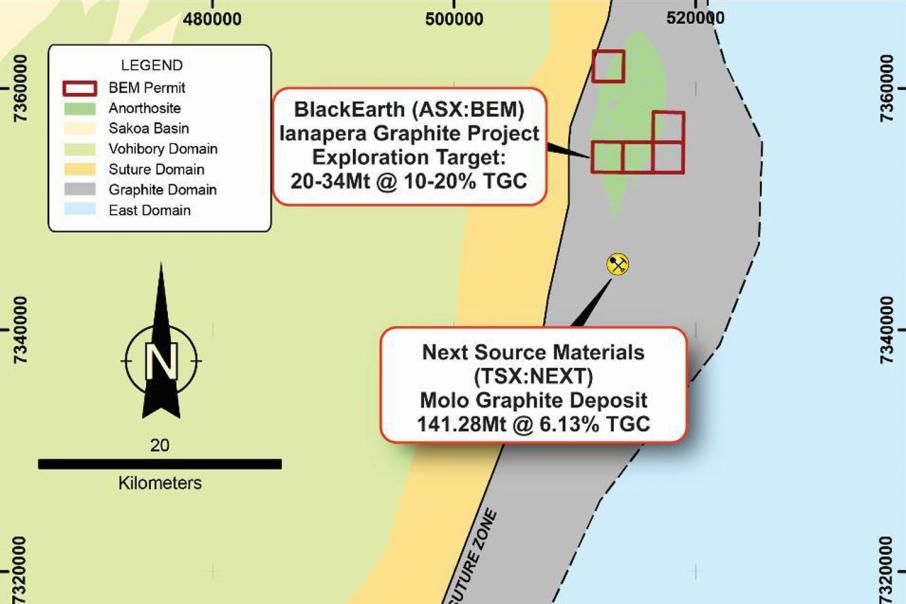 The final round of assays are now in from Blackearth Minerals’ trenching program at its Ianapera graphite project and they haven’t disappointed.

In fact, they have compelled the ASX listed graphite developer to table an impressive exploration target of up to 34 million tonnes of high-grade material.

The Perth-based company told the ASX this week the final batch of assays from a trenching program at Ianapera in Madagascar included 14 metres grading 14.0% total graphitic carbon or “TGC” and 14m @ 12.36% TGC.

These are the latest in series of mouth-watering results from the program which included a super impressive 18m intersection going 22.06% TGC.

The completion of the program of 29 trenches with a combined length of 1874m means Blackearth now has a big database of TGC grades at Ianapera with significant mineralisation now consistently identified over 5km of strike.

The trenching results have been matched with field mapping and an airborne electromagnetic survey to establish an exploration target of 20-34 million tonnes @ 10-20% TGC.

This is simply an indication of potential tonnages and grades, down to a conservative cut-off depth of 60m and is not a JORC-complaint mineral resource at this stage.

Blackearth this week said it was reviewing the next phase of the exploration program and drilling may be undertaken in 2019/20, subject to available funds.

The Ianapera project is located 5km north of the company’s flagship Maniry project and within 10km of the Molo graphite deposit held by TSX-listed NextSource Materials.

Back in 2019, NextSource was granted a 40-year mining permit, paving the way for financing and development.

Blackearth believes this region of Madagascar could become a global hub for graphite mining and processing. Ianapera is one of two of its projects in the country, both of which look to be coming along at a rate of knots.