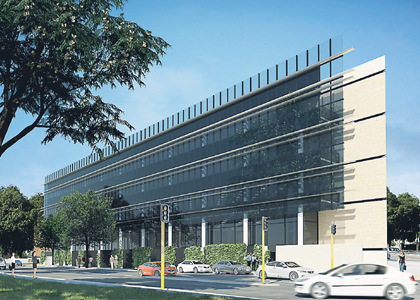 BALANCING the rewards of Perth’s resurgent apartment market with the risks of it growing too big too fast is a daily discipline for Paul Blackburne.

The business brought in revenue of more than $75 million last financial year and has already rung up $125 million in revenue for the 2012-13 period.

The growth partly reflects the expansion of Blackburne’s five-year-old development division, which started out building just one project a year.

It now targets at least three $40 million projects a year, and currently has work with an end value of more than $100 million under construction.

Mr Blackburne admitted it was tempting to push deeper into the development sector, but the $40 million price point had proved to be a sweet spot for the business.

“$20 million construction contracts, $5 million blocks of land, that sort of size is a real niche market in Perth; it’s too small for the big guys and too big for the small guys,” Mr Blackburne said.

“And I daily remind myself to keep it small and stick to the plan.”

Blackburne may not boast the brand recognition of its larger, listed rivals such as Stockland and Finbar, but its Westgate project in Subiaco has provided an unexpected boost to its public profile.

The opposition to Westgate has done little to slow sales, with more than 75 per cent of the office project already taken up.

Mr Blackburne characterises these conflicts as a natural consequence of Perth’s maturation and the state government’s push for nodes of higher density around the city through its planning policy, Directions 2031.

He added that the introduction of development assessment panels to rule on projects with an end value of over $7 million was a step in the right direction.

“In 10 years’ time it (the DAP) will be looked back on as the best thing that ever happened in this state,” Mr Blackburne said.

“And although the new way has some teething problems, it’s getting councils used to the fact that they kind of don’t have control.”

In addition to Westgate, Blackburne has two projects under construction - the $23 million Luxton apartments on Bulwer Street in Perth and the $43 million Haven apartment development in East Perth.

Undeterred by its experience with Westgate, Blackburne has spent $4.8 million purchasing a development site on Roydhouse Street in Subiaco with plans to start marketing an apartment development on this site within months.

If the market remains buoyant, Mr Blackburne said he was confident all three of these projects would be sold out by June.

He puts part of the sales success down to the company’s integrated structure, which feeds clients from its real estate operation into its finance divisions for mortgage broking, investment and financial planning advice.

While it’s a structure he has been building for a decade it’s not without its risks, which Mr Blackburne has seen first hand.

“I have worked with all these developers as a project marketer and learnt what not to do,” Mr Blackburne told WA Business News.

“So it’s been quite easy for me to move from real estate into financial planning and development because I’ve got the experience of all these different things rather than operating in a silo.”