Newly listed BlackEarth Minerals has received a glowing report on the size and quality of graphite at its flagship Maniry project in southern Madagascar, finding plenty of high-purity, jumbo sized flakes that attract premium prices. The report highlighted the Razafy prospect, where BlackEarth is poised to launch a 10,800-metre drill program to establish a maiden JORC resource by mid-year. 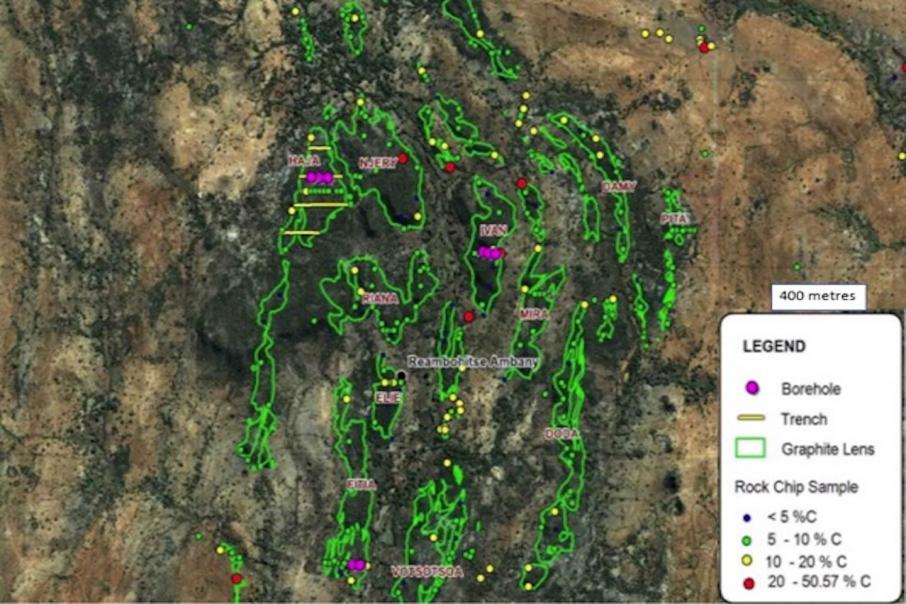 Hot on the heels of its successful ASX listing, BlackEarth Minerals has produced an impressive  mineralogy report on its flagship Maniry deposit in Madagascar.

The new report confirms the existence of high-purity, jumbo flake sized graphite at the project, which are capable of attracting premium prices for use in lithium ion batteries.

BlackEarth released a report this week by the Townend Mineralogy Laboratory on eight diamond core samples taken from the Razafy, Ivan, Haja and Fita prospects at the Maniry graphite project.

The lab reported that graphite was a significant mineral in all samples and was closely associated with kaolin or clay minerals.

As a result of the close association with kaolin, much of the graphite has extreme dimensions, with lengths frequently more than 500 microns and up to 1 mm in length.

All flakes were also found to be free of any internal contaminants, confirming the high-quality nature of the graphite.

Large diameter graphite flakes are the key prize for graphite developers around the world who are all trying to get their slice of the lithium-ion battery market. Jumbo flake-sized graphite, usually defined as greater than 300microns, typically attract a significant price premium over fine to large flake concentrates.

In a statement to the ASX, BlackEarth said the results were very encouraging, given the current global shortfall in large flake supplies. The company said it was also very encouraged by the lack of contaminants inside the flakes which may also suggest potential for high purity graphite production.

Maniry is a key asset for BlackEarth, where the company has defined 34 large scale zones of prominently outcropping, highly predictable graphite mineralisation over an area of 6.5km x 2.5km.

The new mineralogy report backs up the excitement around the company’s successful IPO, which raised $5.45 million before listing on the ASX in January.

BlackEarth has hit the ground running in southern Madagascar and is about to commence a 10,800-metre diamond and RC drilling program. The program will focus on the Razafy prospect, which the report focused on because of its coarse, inclusion-free flakes that were frequently larger than 500 microns.

Managing Director, Tom Revy said: “This report by globally respected Townend Mineralogy Laboratory reaffirms the quality and potential high value nature of the graphite contained in the Maniry project. Core to be generated from the upcoming drill program will not only be used for resource definition, but will also be used for ongoing mineralogy and metallurgical test work.”

BlackEarth has set an ambitious target of churning out a Jorc resource estimate by mid-year with a scoping study to follow by the end of 2018.