Steve Birkbeck has bold plans for his family’s newest venture. 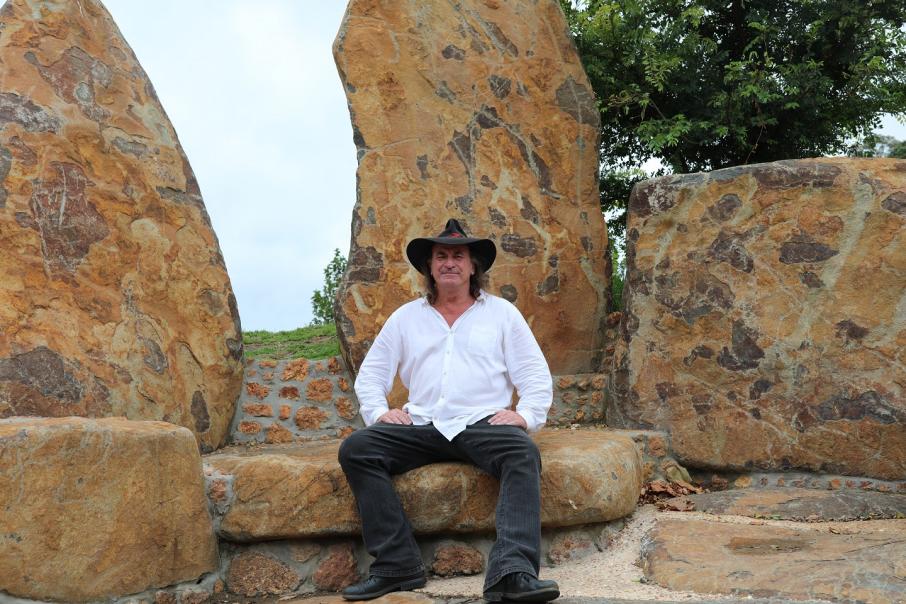 Steve Birkbeck has made and lost millions over his working life.

Mr Birkbeck’s career has been defined by incredible highs, like working with some of the world’s most luxurious perfume companies and founding a multi-million-dollar sandalwood business.

He has also faced devastating lows, confronting a challenging cancer diagnosis and resigning as chair of Atlas Pearls, losing millions in the process.

Some of his business ideas have been inspired, others more fanciful, from selling emu leather to crushing pearls to make perfume.

However, there is some method to his madness with Mr Birkbeck attracting wealth wherever he goes.

“If you are really creative, money will flow if you really believe in what you are doing.”

Now, Mr Birkbeck and his family have several new projects, including a distillery called Cannabis Botanical Distillery, and a restaurant, The Dam, in Denmark.

The restaurant and distillery are located on the family’s 356-hectare property, Raintree.

The farm runs more than 200 Black Angus cattle, grows more than 3ha of Cannabis sativa and produces two tonnes of marron from its dams.

This produce is served at the restaurant while the Cannabis sativa is used by the distillery to create hemp spirits.

The farm project has been a long time coming, with more than 20 years of planning and 13 years of construction.

While owned by the Birkbeck family, the venue is managed by Mr Birkbeck’s daughter, Chelsea Birkbeck, and her husband, Matt Beaton.

The pair also owns the distillery, and the family is a partner.

A regional restaurant and distillery in Denmark might not seem to fit Mr Birkbeck’s creative style, but he has ambitious plans for the site.

He is banking on changes to cannabis regulation, calling the site ‘an Amsterdam coffee shop in waiting’.

“This is the largest cannabis flagship in Australia, today,” Mr Birkbeck said.

“There is nothing bigger, there’s not a larger investment anywhere in the cannabis industry as a retail focal point for people to come in and explore the world of cannabis.

“When industry reform happens, and it will inevitably happen, it’s a gold mine for these children, my children, in the next 30, 40 years.”

In the meantime, he is considering a return to his roots in the cosmetic industry, to create gels and creams infused with cannabis (without the THC component).

Mr Birkbeck said he was also considering adding THC into The Dam’s beverages and exporting them to the Netherlands and some areas of the US, where cannabis was legal.

He said creating mind-altering experiences in drinks was a ‘pet fetish’ of his.

“Whether I will be allowed to do it, whether the kids will let me, is another question,” Mr Birkbeck said.

With the restaurant open and the distillery functioning, the next project is building on-site accommodation to provide Denmark with some resort-style options.

He said the farm was in a great location: a 10-minute drive from popular beach Greens Pool and adjoining several walking and cycling routes, including the Bibbulmun Track and Munda Biddi Trail.

Mr Birkbeck also plans to build solar and hydro-powered ecolodges on the property.

Mr Birkbeck’s first foray into business was in the Mid West town of Wiluna.

He partnered with an Aboriginal man who carved and sold emu eggs, a business he admits would be totally politically inappropriate today.

His second venture was running an emu, crocodile and turtle farm the government had established in the town.

In this role, Mr Birkbeck had several run-ins with the authorities, causing him to be sacked and reinstated by the community three times.

In 1983, the farm wasn’t making money, so he built a tannery and started selling emu leather for clothes and furniture overseas, which proved to be an international success.

But mental health issues in his late 20s required him to step back from business and take time out.

He swapped his house for a cattle farm in Denmark and lived a self-sufficient lifestyle.

However, the hiatus from business was short-lived.

One day, when his wife, Karen, and his two children were at the shops and had a grocery cheque bounce for a second time, Mr Birkbeck decided to re-enter the business world.

He returned to the emu industry, this time selling emu fat and oils to cosmetic companies.

To scale up, Mr Birkbeck purchased an essential oils factory in Albany that came with a stockpile of sandalwood.

The sandalwood piqued his interest, and he began selling sandalwood oil to luxury perfume manufacturers in France, under the name Mt Romance.

Mt Romance became one of the biggest sandalwood distillers in the world, winning numerous accolades, including an induction into the Hall of Fame at the Western Australian Industry and Export Awards.

The company was sold to Melbourne-based Holistic Products Group for $20 million in 2005.

Mr Birkbeck said he wanted to sell it to a French company and suspected the sale to the Melbourne business would not be the best fit for the Albany region.

The same year, Mr Birkbeck had a cancer scare and found himself in ICU for four months with a 19 per cent chance of survival.

Once again, he overcame the odds and left hospital in 2006.

In 2007, he learnt the company he founded, Mt Romance, was bankrupt.

Mr Birkbeck made the decision to buy it back with Australian billionaire property developer John Gandel.

The pair turned the company around and sold it for $30 million to sandalwood producer Quintis a year later.

“At that point, in 2008, I decided I never wanted to buy back the company and I wanted to retire,” Mr Birkbeck said.

He turned his attention to philanthropic causes, travelling the world and presenting on ethics and sustainability in the cosmetics industry.

In 2008, he formed the President’s Circle, a group of leaders from the top perfume companies in France united under the goal of creating a more sustainable industry.

Mr Birkbeck said this was his greatest achievement.

“‘Honey, remember this night, remember where we are, because this is the pinnacle of everything we will ever achieve’,” Mr Birkbeck recalled saying to his wife at the time.

In 2010, he became executive chair of Atlas Pearls and found his next business venture: making perfume from pearls.

“I wasn’t into pearls as jewellery, I was into perfumes,” Mr Birkbeck said.

Things were looking positive; French-Australian singer Tina Arena came on board to help make the world’s first perfume from pearls and the company had a successful financial year in 2014, growing revenue by 56 per cent, when Mr Birkbeck got a call.

The company had overestimated the group’s biological assets due to a crop of smaller pearls, affecting the group’s liquidity.

Mr Birkbeck took the blame and resigned as executive chair.

Atlas Pearls’ share price plummeted on the news and Mr Birkbeck, who owned 20 per cent of the company, lost millions.

“It was my only failure of my whole life and I had it right at the end of my [professional] life,” he said.

The event made him reconsider how he wanted to spend his time and money.

“I will never do anything public; I want to control something 100 per cent myself and just have a family business.”

It seems Mr Birkbeck’s three daughters, all of whom own businesses in the Great Southern, have taken on his entrepreneurial spirit.

While Mr Birkbeck still has plenty of ideas, he said his role was to support his daughters’ business ambitions.

“My job behind the scenes is to just stay real,” he said.

Business News was recently hosted by Taste Great Southern on a tour of the region.