Eastern states-based Asian street food vendor Bing Boy has opened its first outlet in Western Australia, one of 10 new stores the chain is planning over the next two years. 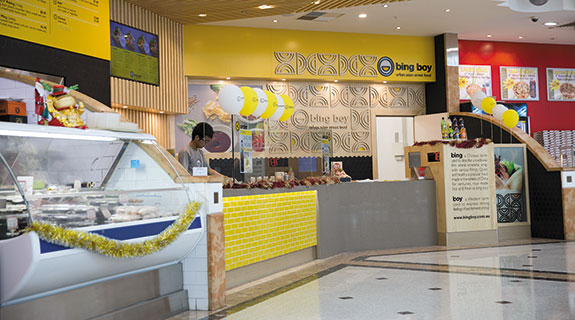 Eastern states-based Asian street food vendor Bing Boy has opened its first outlet in Western Australia, one of 10 new stores the chain is planning over the next two years.

The restaurant chain, which specialises in Chinese-style wheat omelette wraps with various fillings known as ‘bings’, opened its 34th Australian store at Galleria Shopping Centre in Morley earlier this month.

Bings are a quintessential Chinese street food, which have been popular for centuries, but were only introduced to the Australian market by Bing Boy three years ago when its first store opened in Adelaide.

Bing Boy managing director Ming Ma said the opening of the first WA store was the next major step in the organisation’s national growth plan.

“We already have 12 stores in South Australia, 18 in Victoria and three in Queensland so we’re really happy that our early success has now enabled us to move into a fourth state,” he said.

Mr Ma said the chain’s grand plan was to have Bing Boy stores operating in every state and territory in Australia.

The opening of Bing Boy is yet another step in Perth’s rapidly diversifying fast-service restaurant scene, which has resulted in a wave of new market entrants in recent years including Mad Mex, Guzman Y Gomez, Oporto, Zambrero and Salsa’s Fresh Mexican Grill.

The increasing popularity of the Twilight Hawkers Markets, the City of Perth’s Food Truck Rumble, Curtin University’s assemblage of street food operators, and the Mount Hawthorn Hawkers markets is another indication of Perth punters’ growing appetites for international street cuisine.